Characterisation and Study of Compounds by Single Crystal X-ray Diffraction

Photopolymers have long been considered as crucial materials in developing technology related to photonic applications such as holographic data storage, holographic filters, holographic interferometry, and holographic optical elements [1,2,3,4]. Most holographic photopolymer systems are prepared by free radical polymerization, due to its relatively versatile fabrication process and highly efficient photo-initiators. Thick-film recording material (fulfilling Bragg’s condition) with a high optical quality is a key requirement among various applications. This condition cannot be easily achieved by traditional means of fabrication, because more optical scattering would happen whenever the thickness of the recording material is raised, diminishing the reliability of the holographic device [5,6].
In addition, volume shrinkage is regarded as another inevitable defect in the free radical-initiated photopolymers, caused by the rather rapid and uncontrollable radical reaction from the viewpoint of the polymerization mechanism. The shrinkage problem may be solved by adopting a pre-polymerized matrix binder with a matching refractive index to the polymerizing monomer used [7,8]. A 9,10-phenanthrenequinone (PQ)-doped methyl methacrylate (MMA) photopolymer with a matrix binder PMMA was proved to be effective [2,5,9,10,11]. The refractive index uniformity throughout the whole holographic film was claimed to be primarily due to the minimized quantity of the residual monomers and photo-initiators involved in the fabrication of the photopolymer; also, the matrix structure was maintained during holographic recording [2,5,9,10,11]. Although the PQ/PMMA photopolymer system showed a great optical response and quality with the pre-polymerization method, its holographic recording at a widely used wavelength 532 nm was reported with a low sensitivity, which could be attributed to the fact that the resonance frequency of the PQ molecule is far away from 532 nm, thus reducing the hologram recording capability [12]. It is thus advised that the consistency of the optical performance between the absorption behavior of the absorption spectrometer and the holographic device should be carefully checked.
Other photo-initiators, such as bis-(2,6-difluoro-3-(1-hydropyrrol-1-yl)phenyl) titanocene 784 (Irgacure 784, or I-784), have been frequently used in holographic applications. The optical performance at 532 nm green light for I-784 is better and more efficient than PQ, as far as the optical response, the absorption coefficient, the resonance frequency, and the optical density are concerned [12,13]. The formation of holographic recording in the photopolymer system is generally attributed to the photo-initiator-induced free radical polymerization of monomers, and they form a phase grating. Major polymerization occurs in the constructive interference area (bright region). The photo-initiator and monomer molecules diffuse from the region of destructive interference area (dark region) into the bright region; consequently, a difference between the refractive indices in the dark and the bright regions is created, and thereby a phase grating is formed [6,14,15].
The initiator concentration has played an instrumental role in deciding the optical performance of the related photopolymers for holographic storage. This can be verified by the two well-known and well-developed systems—i.e., PQ/PMMA and I-784/PMMA. The concentration of PQ and I-784 has been limited by solubility, with the PQ being only 0.7 wt % and I-784 up to 7 wt % [13]. The latter is 10 times greater than the former; however, the optical performance of I-784 has been not as good as it should be as far as solubility is concerned. In practice, the widely used photo-initiator concentration in related photopolymer systems has been about 1–10 wt %, which gives a reasonable optical sensitivity and response [12]. From the viewpoint of better phase grating formation in the holographic film and the better crack-resistance of the photopolymer itself, a commercially available and widely used monomer ethylene glycol phenyl ethyl arylate (EGPEA) was chosen due to its high refractive index and more rigid poly(ethylene glycol phenyl ethyl acrylate) (PEGPEA) that was thus formed.
Sabol et al. studied the parameters influencing the optical characteristics of photopolymers and established a model of photo-initiation kinetics with a varying exposure power density (mW/cm2) and I-784 concentration at 532 nm [16]. Based on Sabol’s results, an attempt to lower the photo-initiator concentration was made in this study in order to maximize the efficiency of the optical response of PEGPEA. Therefore, a concentration of I-784 added into the system was controlled from 0.37 to 0.41 wt % (relative to EGPEA), while the solvent and PMMA matrix remained unchanged. Thus, the I-784 concentrations were at roughly one-twentieth of the reported maximum solubility, and were far less than the widely used concentrations in many photopolymer studies [1,2,5,9,10,11,12,13].

All the materials in this work were used as received. PMMA (molecular weight 300,000 g/mole, refractive index 1.490) and EGPEA (molecular weight 100.12 g/mole, refractive index 1.518) were purchased from Sigma-Aldrich (St. Louis, MI, United States); solvent acetone (A.C.S. grade, purity >99.5%) was purchased from Baker. PMMA as the matrix for EGPEA was dissolved in excess acetone with mechanical stirring at room temperature for 24 h. Part of the acetone would evaporate during this stage, yet the solution remained viscous. It was then mixed with EGPEA monomers and the yellowish photo-initiator I-784 (Ciba) by vigorous mechanical stirring for 1/2 h. The weight ratios of EGPEA to PMMA were kept at 0.59, 0.65, and 0.69 for the P-1, P-2, and P-3 series, respectively. This yellowish viscous solution was then cast into a glass substrate to form a holographic thin film, which was circled by an O-ring rubber. The thickness of the thin film, ranging from ca. 100 to 500 μm could be controlled by adjusting the amount of acetone. This thin-film holographic material was then placed in dark at room temperature for an additional 24 h to ensure that all the acetone was completely removed. A series of experiments was performed to evaluate the optical sensitivity and diffraction efficiency of the holographic film with various film thicknesses and I-784 concentrations.
Figure 1 shows the holographic setup for the holographic recording and reading. In the recording process, a DPSS 532 nm laser was used as the light source. A beam splitter (BS) divided the laser beam into two parts with the same power and polarization mode. These two beams were interfered in the holographic medium with an incident angle of 3° (θ1) and a total power density of 12.55 mW/cm2. In the reading process, a He-Ne laser with a wavelength of 633 nm was used to measure the diffraction efficiency η. Based on Bragg’s condition, the incident angle of the reading beam was approximately 3.6° (θ2). In this study, η is calculated by the ratio of Id/It, where Id is the 1st order intensity and It is the intensity of the incident light before interference at 633 nm. A power meter was used to measure the laser intensity in a continuous recording mode with about a 3–4 Hz sampling rate.

An optical setup based on reflection holography was built to evaluate the performance of 3D image reconstruction. Figure 5 depicts the configuration of the holographic recording. A specimen in P-2 series with thickness 220 nm and diffraction efficiency 80%, coated on a 2.5 × 2.5 cm glass substrate, was selected as the holographic material. The reference beam was a plane wave formed by launching the laser wave into a spatial filter and a collimated lens, while the object beam was produced by a diffusive reflection from two 6-membered-ring metal nuts (as shown in Figure 6a). The volume hologram was recorded with the reference and object beams arriving from opposite sides. Figure 6b shows the reconstructed 3D image by illuminating the reflection hologram with a white light source. It is evident that the profile of the original metal nuts is successfully recorded and holographically displayed on this EGPEA-based hologram. Considering that the whole holographic process was not digitally inscribed and without using a multiplexing technique, the quality of this reconstructed holographic image was not as clear as expected. This necessitates the further improvement of the optical setup in the inscription conditions.

One of the authors (FYL) is grateful for the financial support from the MOST grant. 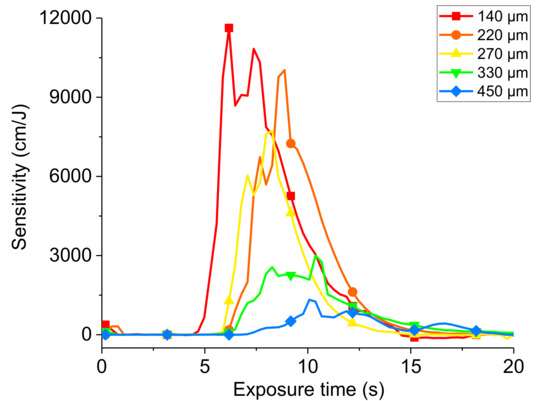 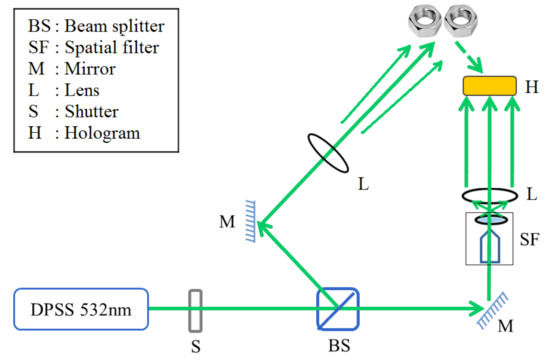 Table 2. Optical performance compared.
Table 2. Optical performance compared.
Monomer DT = S-[4-(2-methylprop-2-enoylsulfanyl)-6-(N-phenylanilino)-1,3,5-triazin-2-yl] 2-methylprop-2-enethioate, MMA = methyl methacrylate; matrix PES = polysulfone, PMMA = poly(methyl methacrylate). I-784 concentration used in reference 13 was based on weight percent to monomer.
© 2020 by the authors. Licensee MDPI, Basel, Switzerland. This article is an open access article distributed under the terms and conditions of the Creative Commons Attribution (CC BY) license (http://creativecommons.org/licenses/by/4.0/).
We use cookies on our website to ensure you get the best experience. Read more about our cookies here.
Accept
We have just recently launched a new version of our website. Help us to further improve by taking part in this short 5 minute survey here. here.
Never show this again