8-Hydroxydaidzein (8-OHDe) has been proven to possess some important bioactivities; however, the low aqueous solubility and stability of 8-OHDe limit its pharmaceutical and cosmeceutical applications. The present study focuses on glycosylation of 8-OHDe to improve its drawbacks in solubility and stability. According to the results of phylogenetic analysis with several identified flavonoid-catalyzing glycosyltransferases (GTs), three glycosyltransferase genes (BsGT110, BsGT292 and BsGT296) from the genome of the Bacillus subtilis ATCC 6633 strain were cloned and expressed in Escherichia coli. The three BsGTs were then purified and the glycosylation activity determined toward 8-OHDe. The results showed that only BsGT110 possesses glycosylation activity. The glycosylated metabolites were then isolated with preparative high-performance liquid chromatography and identified as two new isoflavone glucosides, 8-OHDe-7-O-β-glucoside and8-OHDe-8-O-β-glucoside, whose identity was confirmed by mass spectrometry and nuclear magnetic resonance spectroscopy. The aqueous solubility of 8-OHDe-7-O-β-glucoside and 8-OHDe-8-O-β-glucoside is 9.0- and 4.9-fold, respectively, higher than that of 8-OHDe. Moreover, more than 90% of the initial concentration of the two 8-OHDe glucoside derivatives remained after 96 h of incubation in 50 mM of Tris buffer at pH 8.0. In contrast, the concentration of 8-OHDe decreased to 0.8% of the initial concentration after 96 h of incubation. The two new isoflavone glucosides might have potential in pharmaceutical and cosmeceutical applications. View Full-Text
Keywords: Bacillus; glycosyltransferase; 8-hydroxydaidzein Bacillus; glycosyltransferase; 8-hydroxydaidzein
►▼ Show Figures 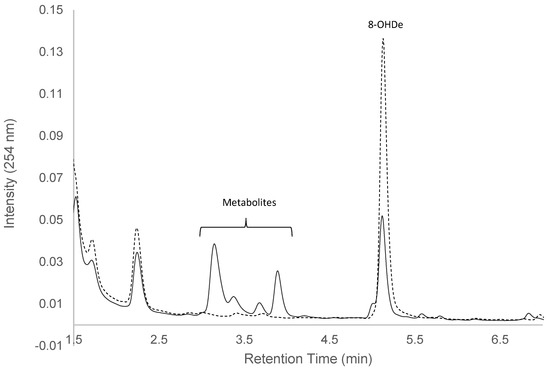