The Limonene Biorefinery: From Extractive Technologies to Its Catalytic Upgrading into p-Cymene

:
Limonene is a renewable cyclic monoterpene that is easily obtainable from citrus peel and it is commonly used as a nutraceutical ingredient, antibacterial, biopesticide and green extraction solvent as well as additive in healthcare, fragrance and food and beverage industries for its characteristic lemon-like smell. Indeed, the lack of toxicity makes limonene a promising bio-alternative for the development of a wide range of effective products in modern biorefineries. As a consequence, industrial demand largely exceeds supply by now. Limonene can be also used as starting substrate for the preparation of building block chemicals, including p-cymene that is an important intermediate in several industrial catalytic processes. In this contribution, after reviewing recent advances in the recovery of limonene from citrus peel and residues with particular attention to benign-by-design extractive processes, we focus on the latest results in its dehydrogenation to p-cymene via heterogeneous catalysis. Indeed, the latest reports evidence that the selective production of p-cymene still remains a scientific and technological challenge since, in order to drive the isomerization and dehydrogenation of limonene, an optimal balance between the catalyst nature/content and the reaction conditions is needed.
Keywords:
limonene; green extraction; essential oil; citrus processing waste; p-cymene

The chemical conversion (upgrade) of lignocellulosic biomasses and wastes for the production of fuels and chemical building blocks, the so-called “biorefinery”, has been widely explored in the last two decades [1,2]. Modern biorefineries already use cellulose, hemicellulose and lignin (the three-key components of lignocellulose) as starting feedstocks for the preparation of furans, polyols, acids and aromatics [3,4,5]. However, other important platform chemicals can be easily extracted from biomass-derived wastes and residues and used as biobased building blocks for the preparation of value-added intermediates, products, renewable energy and biofuels, supporting and slowly replacing the well-assessed technologies that gave a great contribution to these fields [6,7,8,9,10].
In this context, limonene (1-methyl-4-(1-methyl phenyl) cyclohexene), the main constituent of citrus essential oil (around 68–98% w/w) is industrially derived from the citrus industry from orange processing waste [11]. An optically active cyclic monoterpene that exists in two enantiomeric forms, R-limonene (the predominant isomeric form in citrus varieties, also known as d-limonene) and S-limonene (the less common isomer found in mint oils) [12,13,14,15], limonene is generally adopted as a flavor and fragrance additive in the cosmetic and perfume industries due to its pleasant citrus smell, and in the food industry as a flavor and preservant, avoiding alterations of the organoleptic properties. Moreover, it is also extensively adopted as an ingredient in household cleaning products, as wetting and dispersing agent in manufacturing resins, in the production of varnishes, in germicide treatments for wastewaters [16] and as insect control. In this regard, limonene represents an efficient alternative to halogenated carbon hydrates or conventional degreasing agents. Likewise, due to its elevated apolar solvent properties, limonene is a versatile compound used as a green solvent for the extraction of natural products, replacing toxic oil-based solvents such as n-hexane [17,18,19]. For example, it was recently proven to have a unique ability to recover marine oils rich in omega-3 lipids, vitamin D and carotenoids from shrimp and anchovy leftovers [20,21,22]. These uses are particularly important in light of its anticancer, anti-tumoral and anti-diabetic properties [23,24]. The industrial demand of limonene largely exceeds its supply, limited by the yearly global production of orange crops. As a result, the price of orange essential oil (EO) has increased to such an extent that it is now a primary source of revenue for the orange juice industry [13,25].
Due to its versatile chemistry, when the supply of the terpene obtained via bacterial fermentation will replace limited supply from citrus processing waste, limonene will replace a number of aromatic intermediates currently produced from oil [13,26,27]. For example, 1,2-limonene oxide obtained via catalytic selective oxidation readily reacts with carbon dioxide to form biobased polycarbonates of exceptional optical and mechanical properties, with some important reviews published in recent years on this subject [28,29,30]. Likewise, limonene can be used as a substrate for the production of p-cymene, a fine chemical intermediate in several industrial chemical processes [31,32]. In fact, p-cymene is involved in the synthesis of fragrances, perfumes, flavors, fungicides, pesticides and pharmaceutical products [23]. At the same time, in the perfume industry, it is used as a raw material for the production of key intermediates including p-cresol that is used, for example, in the production of antioxidants such as butylated hydroxytoluene (BHT) [33,34,35]. Moreover, p-cymene can be added to inks, adhesives, paints and pigments and is widely used for the manufacture of some products that are normally obtained from petroleum-based compounds. Finally, p-cymene can be transformed into aromatic monomers, including terephthalic acid and dimethyl styrene, or used as starting substrate for the synthesis of non-nitrate mosses (i.e., tonalide).
The current industrial route to p-cymene using the Friedel-Crafts alkylation of benzene with methyl and isopropyl halides or of toluene with 2-propanol generates a large amount of byproducts. Moreover, the use of large quantities of hazardous acid catalysts gives rise to safety, corrosion, handling and waste disposal problems. In further detail, the FC alkylation is performed at high temperatures (200–450 °C) in the presence of AlCl3, BF3 or H2SO4 as catalysts, producing significant amounts of by-products (especially o- and m-cymene along with other multiple alkylation products) with an overall yield of p-cymene that usually does not exceed 50%. Finally, since the conventional p-cymene production occurs in a liquid phase, the separation of the reactants from the catalyst is an energy-intensive process [36,37,38]. Alternative methodologies for the production of p-cymene have been widely investigated, including the use of renewable limonene, also considering that a relatively low amount of p-cymene (4000 tonnes) is manufactured yearly [39,40,41,42,43].
In this account, we highlight recent advances in the extraction of limonene from citrus processing waste with particular attention to benign-by-design extractive processes, and its catalytic dehydrogenation for the production of p-cymene.

2. Extraction Methods for an Efficient Recovery of Limonene

3. Upgrading of Limonene into p-Cymene over Heterogeneous Catalysts

Limonene is among the most promising renewable feedstocks for modern biorefineries. Citrus wastes are a good but intrinsically limited source of limonene. Among conventional recovery technologies, cold press extraction provides good yields and ease of applicability. Accordingly, it is the industrial state-of-the-art technology. Amid the new, solvent-free extraction technologies, the highly reproducible, versatile and simple microwave-assisted extraction is one of the more relevant alternatives. Other environmentally friendly methods include supercritical fluid and ultrasound extraction. All these methods are likely to find application when the microbial production of limonene by converting virtually unlimited raw materials such as sugars will be industrialized [94], in order to magnify its production and meet the so far largely unmet market demand for limonene.
At the same time, the development of new green pathways for p-cymene production from limonene is an excellent alternative to the traditional method of obtaining p-cymene via Friedel-Crafts alkylation of toluene with isopropene. The most recent investigations found that supercritical alcohols favoring the catalytic processes by enriching both the solubility and the diffusivity are the most interesting solvents. In almost all cases, p-cymene, γ-terpinene, α -terpinene and terpinolene are obtained. At the same time, the dehydrogenation process of limonene into p-cymene leads to hydrogen as a co-product that can be used for the reductive upgrading of other biobased molecules opening new perspectives in its use as renewable H-donor solvent. 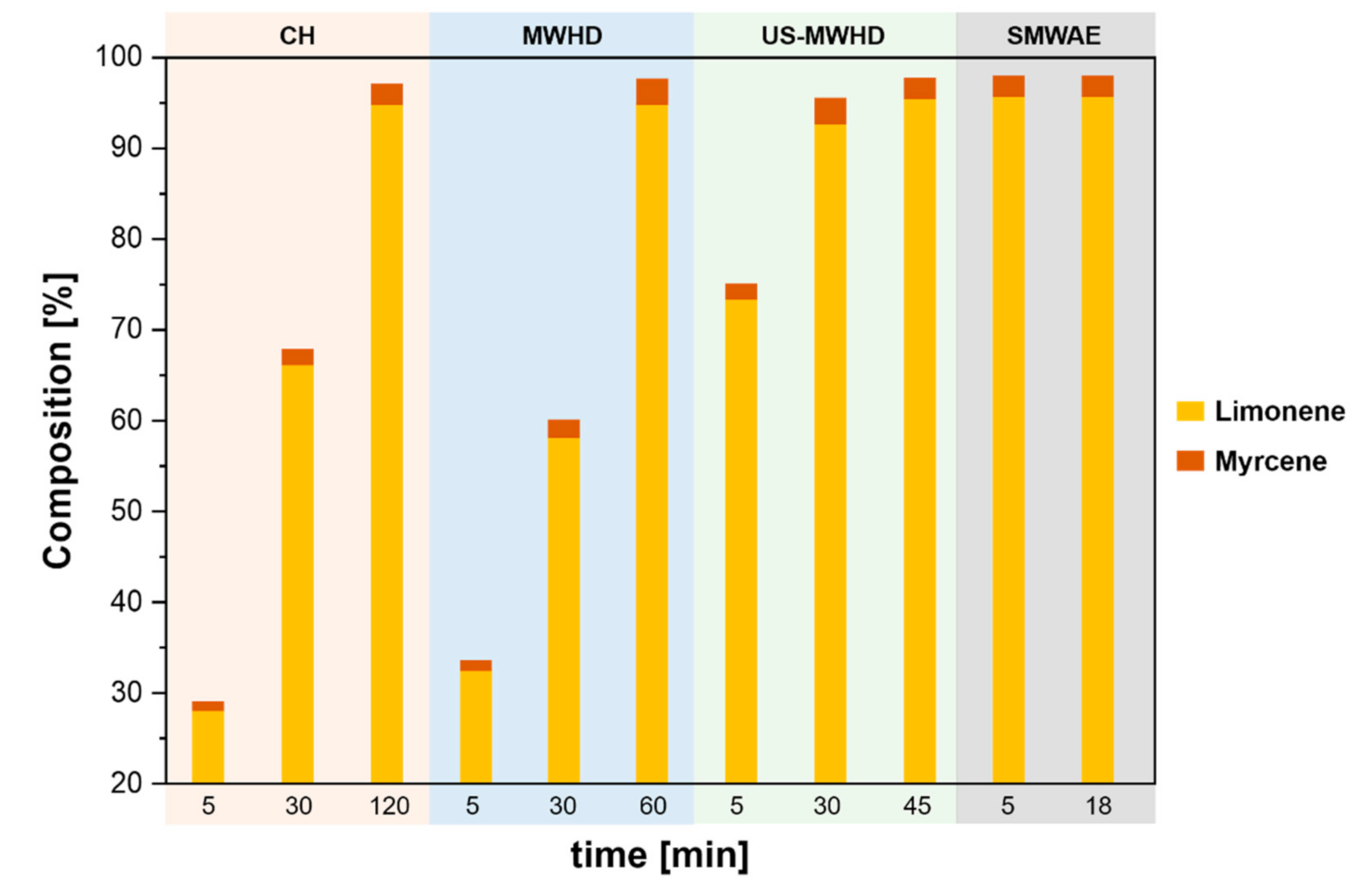 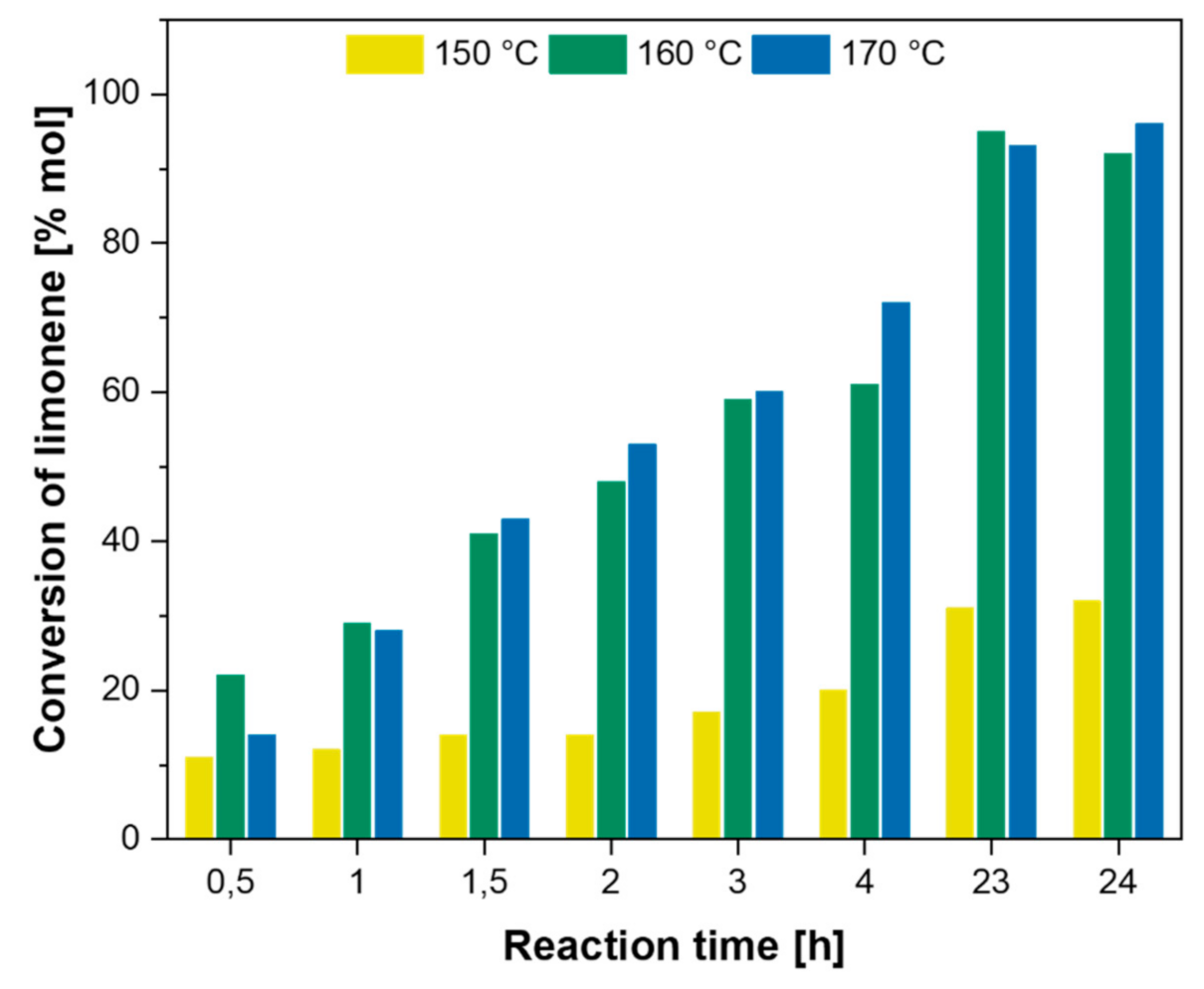 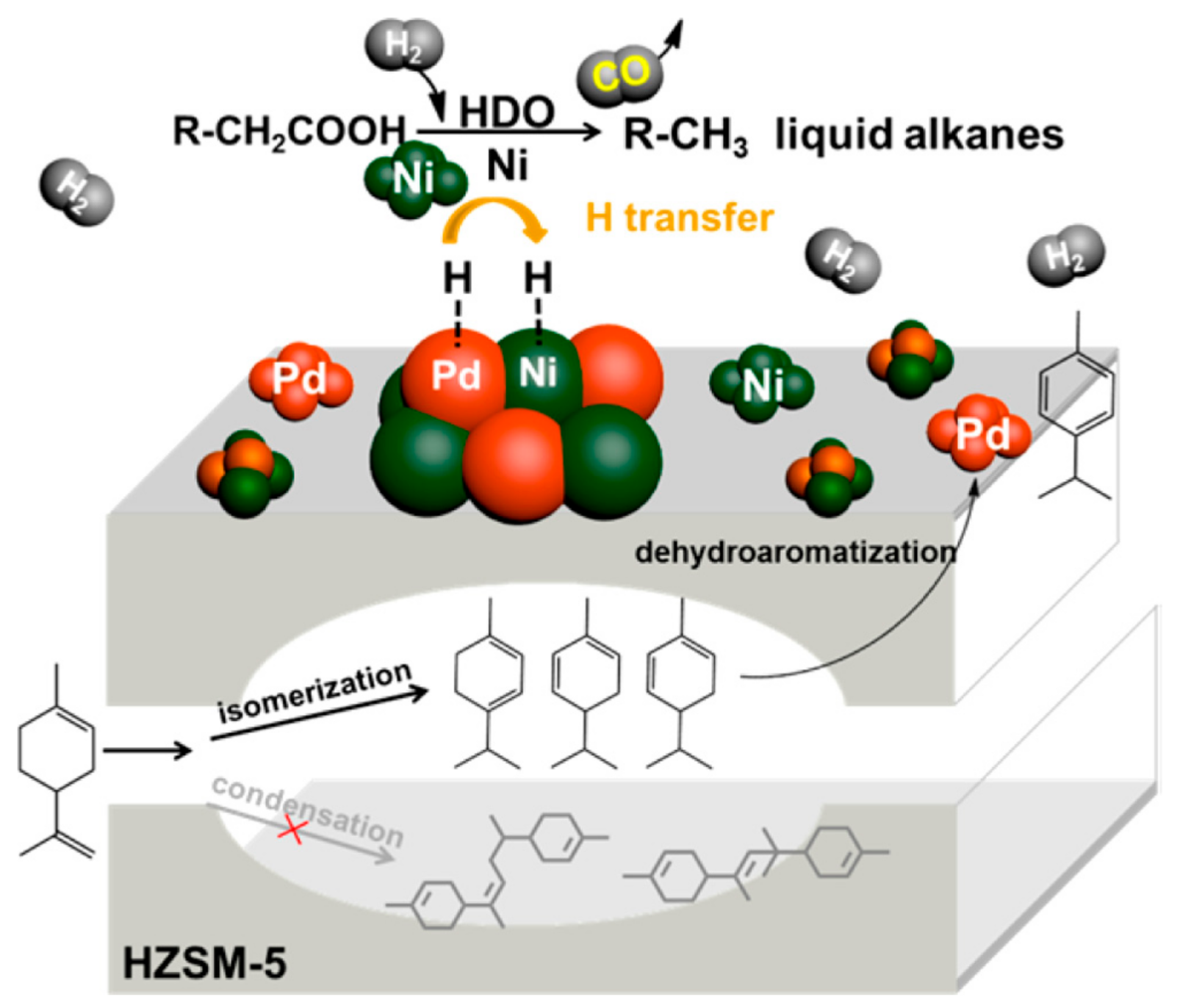