N2 fixation into NH3 is one of the main processes in the chemical industry. Plasma catalysis is among the environmentally friendly alternatives to the industrial energy-intensive Haber-Bosch process. However, many questions remain open, such as the applicability of the conventional catalytic knowledge to plasma. In this work, we studied the performance of Al2O3-supported Fe, Ru, Co and Cu catalysts in plasma-catalytic NH3 synthesis in a DBD reactor. We investigated the effects of different active metals, and different ratios of the feed gas components, on the concentration and production rate of NH3, and the energy consumption of the plasma system. The results show that the trend of the metal activity (common for thermal catalysis) does not appear in the case of plasma catalysis: here, all metals exhibited similar performance. These findings are in good agreement with our recently published microkinetic model. This highlights the virtual independence of NH3 production on the metal catalyst material, thus validating the model and indicating the potential contribution of radical adsorption and Eley-Rideal reactions to the plasma-catalytic mechanism of NH3 synthesis. View Full-Text
Keywords: nitrogen fixation; ammonia; non-thermal plasma; plasma catalysis; dielectric barrier discharge; Eley-Rideal mechanism; model validation nitrogen fixation; ammonia; non-thermal plasma; plasma catalysis; dielectric barrier discharge; Eley-Rideal mechanism; model validation
►▼ Show Figures 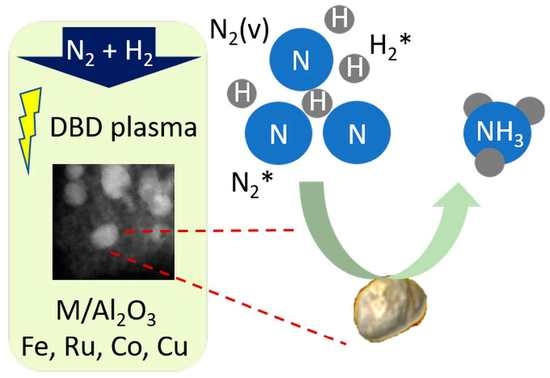 Yury Gorbanev
Dr. Yury Gorbanev obtained a PhD degree from the Centre for Catalysis and Sustainable Chemistry, Technical University of Denmark in 2012. He is now postdoctoral researcher at PLASMANT, University of Antwerp. He has been working on experimental plasma chemistry since 2013, within which period he published 22 research paper in international peer-reviewed journals, and 1 book chapter. His expertise lies is various fields of chemistry, including chemistry of plasma-liquid interactions, radical reactions, and heterogeneous catalysis. He is involved in several projects on plasma-assisted methods of nitrogen fixation.

Annemie Bogaerts
Annemie Bogaerts is full professor and head of the research group PLASMANT which she founded. She has more than 20 years of experience in plasma modelling and plasma chemistry. She is an author of more than 500 publications since 1995. She is member of the Royal Flemish Academy of Belgium for Sciences and the Arts, the Academia Europaea, and the Solvay Local Scientific Committee for Chemistry.
Zoom | Orient | As Lines | As Sticks | As Cartoon | As Surface | Previous Scene | Next Scene
We use cookies on our website to ensure you get the best experience. Read more about our cookies here.
Accept
We have just recently launched a new version of our website. Help us to further improve by taking part in this short 5 minute survey here. here.
Never show this again