The Markov model of reliability of a failover cluster performing calculations in a cyber-physical system is considered. The continuity of the cluster computing process in the event of a failure of the physical resources of the servers is provided on the basis of virtualization technology and is associated with the migration of virtual machines. The difference in the proposed model is that it considers the restrictions on the allowable time of interruption of the computational process during cluster recovery. This limitation is due to the fact that, if two physical servers fail, then object management is lost, which is unacceptable. Failure occurs if their recovery time is longer than the maximum allowable time of interruption of the computing process. The modes of operation of the cluster with and without system recovery in the event of a failure of part of the system resources that do not lead to loss of continuity of the computing process are considered. The results of the article are aimed at the possibility of assessing the probability of cluster operability while supporting the continuity of computations and its running to failure, leading to the interruption of the computational (control) process beyond the maximum permissible time. As a result of the calculation example for the presented models, it was shown that the mean time to failure during recovery under conditions of supporting the continuity of the computing process increases by more than two orders of magnitude.
Keywords: cyber-physical systems; virtualization; reliability; fault tolerance cyber-physical systems; virtualization; reliability; fault tolerance

2. Cluster Organization and Options for Its Recovery

Consider the options for the discipline of maintaining systems with fault tolerance based on virtual machines:
Option B is possible with limited system maintenance, for example due to its autonomous operation.
A situation of disruption of the computational process continuity with Option A is possible, for example, when nodes supporting computations fail during the recovery of failed resources. In this case, the reserve has been exhausted, and the time of their recovery of the cluster exceeds the maximum permissible time of disruption of the continuity of the computing process.
For the considered options for servicing the transition to the state of failure with the inability to implement the required functions for a time exceeding the specified maximum permissible value, it entails the transition to the state of unrecoverable failure.

3. Markov Model of a System with the Migration of Virtual Machines While Ensuring the Continuity of the Computing Process

We construct a Markov model of the reliability of a real-time computer cluster with the migration of virtual machines, for which the condition for operability is the inadmissibility of interruption of the computing process.
We assume that a violation of the continuity of the computing process occurs when, during the recovery of failed nodes, the resources involved in performing functional tasks fail, when their reserve in the cluster is exhausted, and the recovery time exceeds the allowable interruption time of the computing process.
To emphasize the model on the study of the influence of disruptions in the computational process on cluster reliability, we consider the simplest case of pairwise integration of physical servers to ensure the fault tolerance of such pairs during migration of virtual machines.
For each pair of physical servers allocated in the cluster that interact to support dynamic reconfiguration, state diagrams and transitions of the Markov model for organization variants A and B are shown in Figure 2 and Figure 3 The diagram shows the failure and recovery rates of the server and ; disk , ; and commutator , . The actual data replica is loaded onto the recovered disk (synchronization of the distributed storage system) with an intensity of . The VM startup time on the backup server and the user application loading on it are negligibly small in comparison with the loading of the current data replica; therefore, in this study, an instant switch between servers is assumed.
In the initial state (AA0 and B0 for service Options A and B, respectively), all resources of the system under consideration are operational.
Depending on which element failed, the system goes into one of three states. For a model with organization Option A, when a computer fails, the system goes into state AA1, switch AA2, and hard drive AA3. If the system has the ability to recover, then, after repair, it goes into state AA4 with working elements. In state AA4, data are replicated between hard drives. If during replication some element fails, then the system will again go into the corresponding failure state (AA1, AA2, and AA3). If replication is completed and all the elements are functional, the system goes to its initial state (AA0 and B0). If during the repair an element of the backup computer fails, the system goes into complete failure mode.
The system of differential equations in accordance with the state diagram and transitions in Figure 2 for Option A has this form:
For Option B in Figure 3, it has the form:
The presented systems of differential equations make it possible to determine the dependence of the probabilities of all states of the system from time.
The probability of a system working under the condition of maintaining the continuity of the computing process for Options A is defined as: and for Option B is defined as:
It is of interest to expand the proposed Markov models in the case of combining physical servers into larger groups with the migration of virtual machines in them, provided that the computational process is preserved, as well as taking into account the possibility of increasing the probability of timely service in clusters based on their replication [20]. The presented Markov models suggest the ideal control. In this regard, the development of models is of interest, allowing to take into account the influence of control [21] on the reliability of the clusters of the organization under consideration. It is also of interest to study the criticality of the influence of these mechanisms on the potentially attainable level of reliability of cluster systems.

4. Calculation of the Probability of Operability of Duplicated Systems, Provided that the Computational Process Is Continuous

The results of calculating the probability of duplicated computer systems’ operability of the maintaining process’ organization, provided that the computing process is continuous for Options A and B, are presented in Figure 4.
The calculations were performed with the failure rates , , and and recovery rates , , , and .
The presented dependences make it possible to assess the influence on the probability of maintaining the operability of a duplicated system of a restriction on the inadmissibility of interruption of the computing process for the considered options for systems with service Options A and B.

5. Calculation of the Probability of Operability of Duplicated Systems

Having determined the probability of maintaining the system’s operability under the condition of ensuring the continuity of the computing process using the well-known relation: the mean time between failures caused by a violation of the continuity of the computing process is found.
The mean time to failure can be obtained by integrating the system of differential equations for a model with an absorbing state, the initial conditions for a model with n states.
For the systems under study, the left and right sides of the systems of equations for the models under consideration are integrated. Given that, in the presence of an absorbing state, , for the organizing system of Option A, we have [22,23]:
For that of Option B, we have: where is the average time spent in working condition i when starting work from an operable state. Mean time to failure is determined by summing , for all operational states [23]:
For the system under consideration, the time to failure with service discipline Option A is h, and with Option B is h.
Thus, as a result of calculations for the presented example, it is shown that the mean time to failure during recovery in the case of supporting the continuity of the computing process increases by more than two orders of magnitude. This confirms the significance of the impact of the considered service disciplines on the reliability of cluster systems with the migration of virtual machines.

A Markov model is proposed for the reliability of a real-time computer cluster with the migration of virtual machines, for which the condition for the system to work is not to allow the interruption of the computing process.
The proposed model allows considering disciplines with and without recovery of the system by operators, provided that the computational process continues after failures.
Based on the proposed cluster models with the migration of virtual machines, the probability of maintaining the system’s operability is estimated provided that the computing process is continuous and the mean time to failure leading to disruption of the computing process is continuous.
In the future, it is planned to investigate more complex cluster systems that provide for the migration of virtual machines between physical servers, united in groups. It is supposed to investigate the influence of control and redundant request servicing on the reliability of cluster systems and on the probability of timely servicing of queries in them and maintaining the continuity of the computing process. 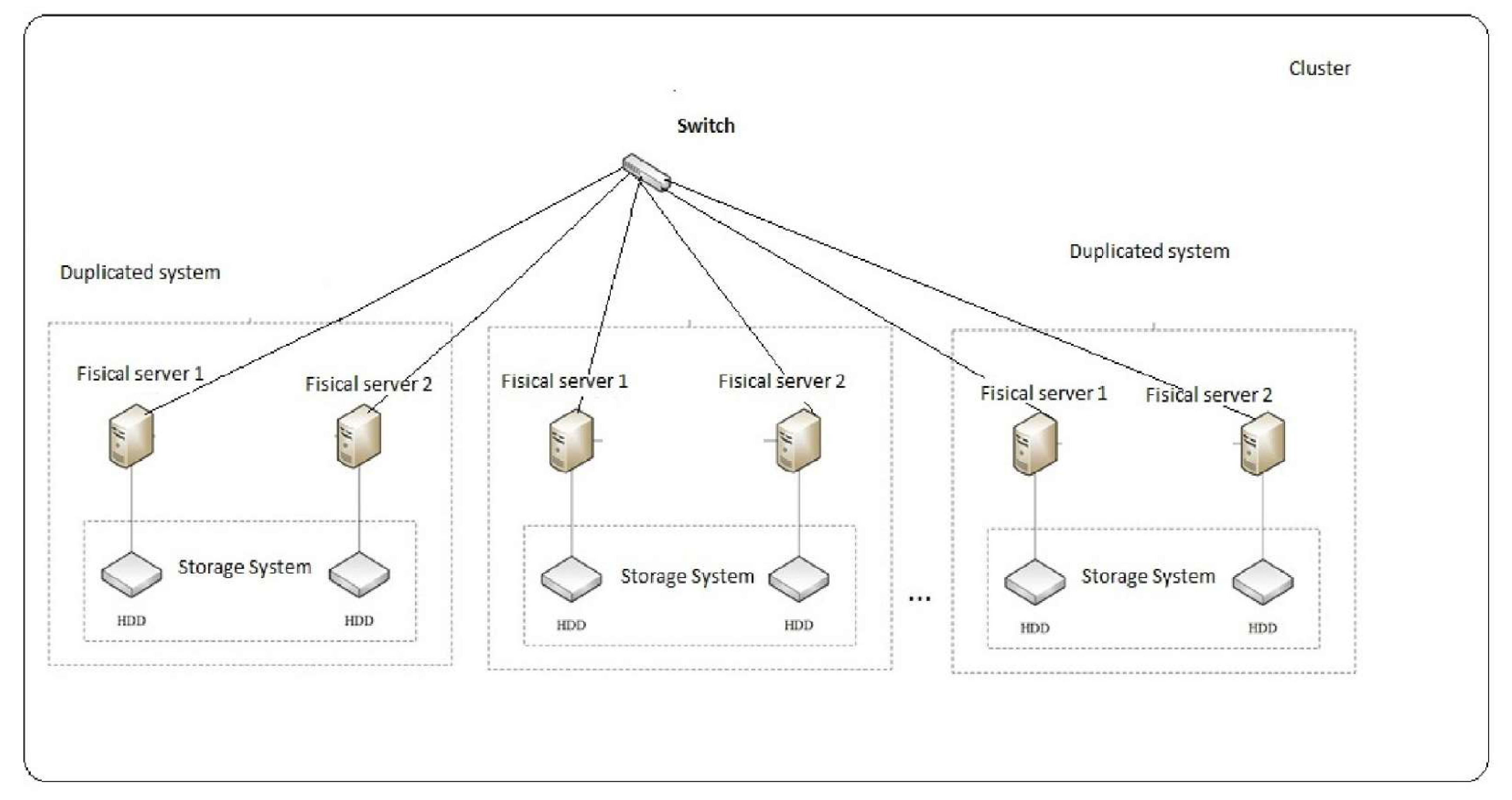 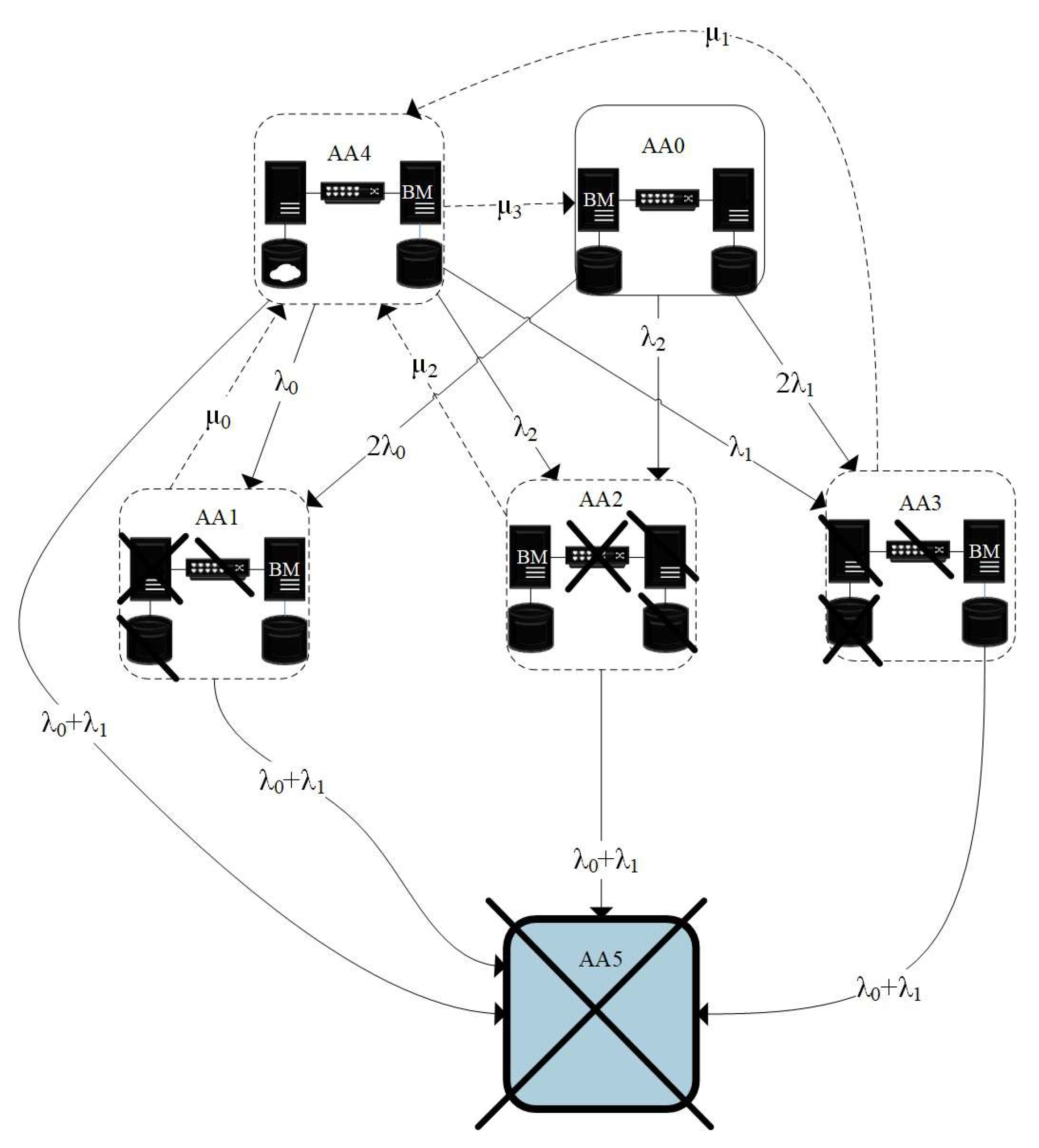 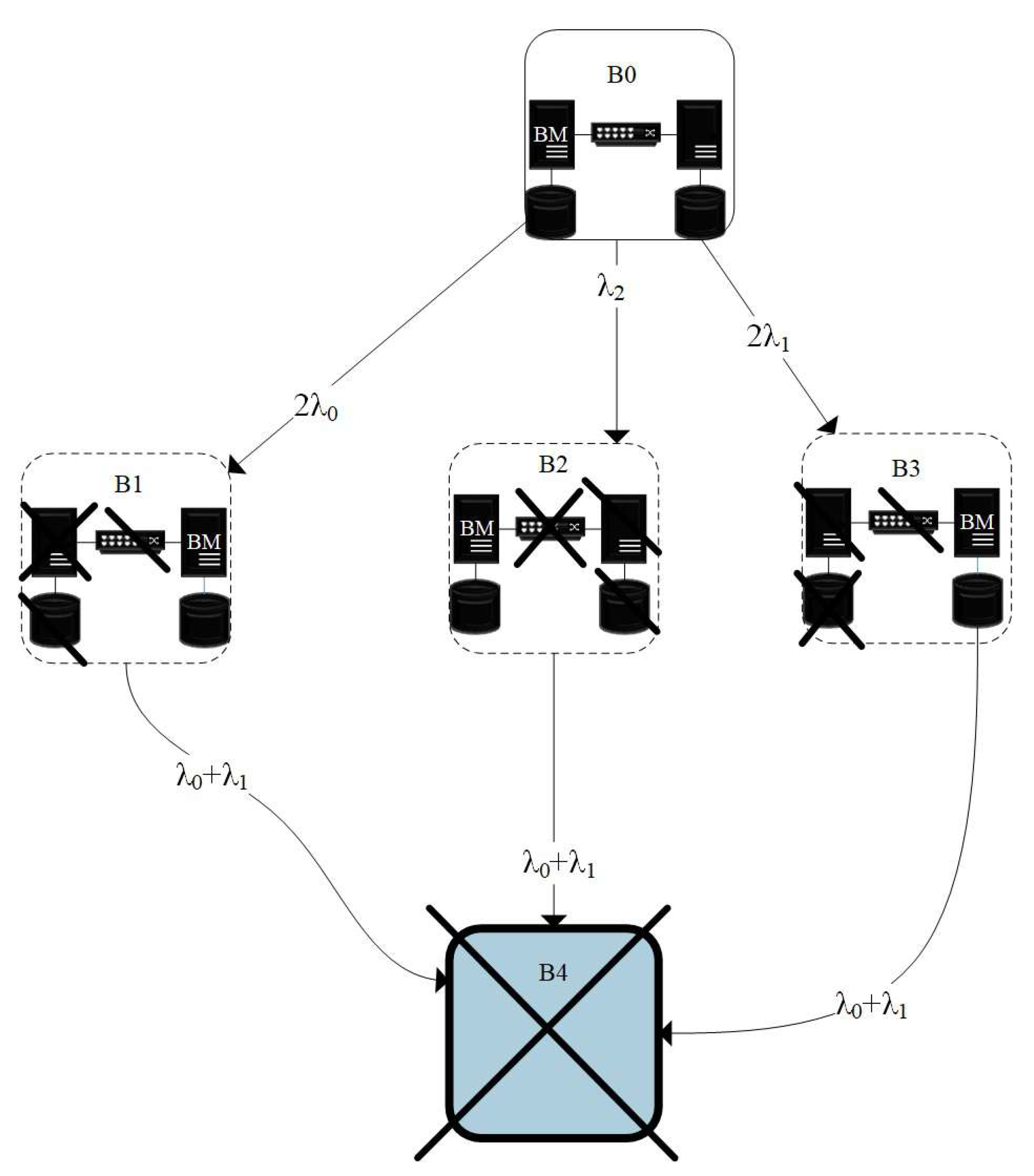