Midkine: A Novel Prognostic Biomarker for Cancer
Next Article in Special Issue

Melanoma is a neoplasm originating from melanocytes, which are derived from the neural crest. It represents 1% of cancers and it accounts for approximately 65% of skin cancer deaths. Melanoma now accounts for approximately 4% of all cancers diagnosed in the United States [1]. Presently, primary cutaneous malignant melanoma can be effectively managed with surgical treatment, obtaining high survival rates after five years follow-up. However, survival dramatically decreases in stages III and IV of this tumor. In these stages, an effective treatment does not exist. The last two decades have seen no significant progress in extending the survival of patients with distant metastases, despite multiple trials of cytotoxic chemotherapy agents. Therefore, there is an urgent need to improve therapy in melanoma patients.
Substance P (SP) is an undecapeptide that belongs to the tachykinin family of peptides. It is known that SP, neurokinin A (NKA), neuropeptide K and neuropeptide Gamma (the two latter elongated forms of NKA) are derived from the preprotachykinin A gene, whereas neurokinin B (NKB) is derived from the preprotachykinin B gene. The biological actions of SP, NKA and NKB are mediated by three receptors, named neurokinin (NK)-1, NK-2 and NK-3; the NK-1 receptor showing preferential affinity for SP. After binding to the NK-1 receptor, SP regulates many biological functions [2,3] and this neuropeptide has also been implicated in neurogenic inflammation, pain and depression [4] as well as in tumor cell proliferation, neoangiogenesis and metastasis [5,6]. In addition, the expression of SP in primary invasive malignant melanomas, metastatic melanomas, melanomas in situ, atypical (dysplastic) nevi, and spindle and epithelioid cell (Spitz) nevi has been described, but it was not detected in any acquired benign melanocytic nevi [7]. Moreover, it was recently reported that human malignant melanoma cell lines and melanoma samples express NK-1 receptors [8]. It has also been demonstrated that the activation of the NK-1 receptor by SP induces mitogenesis in several melanoma cell lines [9,10,11] and in other tumor cell lines [12,13,14,15,16,17,18,19,20]. In addition, it is known that SP is a main mediator of capillary vessel growth in vivo and of the proliferation of cultured endothelial cells in vitro, and that SP also induces neoangiogenesis [21]. Moreover, the active migration of tumor cells, a crucial requirement for invasion and metastasis development, is regulated by SP signals [22].
The NK-1 receptor antagonist L-733,060 (a piperidine derivative) showed a high affinity for the human NK-1 receptor in vitro [23]. We have also demonstrated that L-733,060 shows antitumor activity against human malignant melanoma cell lines [10] and against neuroblastoma, glioma, retinoblastoma, pancreas, larynx, gastric and colon carcinoma cell lines [10,15,16,19,20]. Furthermore, it has been recently reported that the NK-1 receptor antagonist aprepitant (a morpholine derivative) is a broad spectrum antitumor drug [24] and exerts an antitumor action against human malignant melanoma cell lines [8]. Additionally, the NK-1 receptor antagonist L-732,138 (an L-tryptophan derivative) showed a competitive and selective antagonism for the NK-1 receptor. It is approximately 1,000-fold more potent in cloned human NK-1 receptors than in cloned human NK-2 and NK-3 receptors; and approximately 200-fold more potent in human NK-1 receptors than in rat NK-1 receptors [25]. It is known that the administration of L-732,138 exerts an attenuation of hyperalgesia [26] and it has been also described that L-732,138 is able to antagonize H(3) antagonist-induced skin vascular permeability [27]. In addition, antitumor activity against glioma, neuroblastoma, retinoblastoma and larynx carcinoma was shown [17,18,19,28]. However, to our knowledge it is unknown whether the antitumor action of the NK-1 receptor antagonist L-732,138 is exerted, or not, on human malignant melanomas. Thus, the aims of this study are: (1) To demonstrate, using a MTS colorimetric method to evaluate cell viability, the antitumor action of the NK-1 receptor antagonist L-732,138 against human melanoma COLO 858, MEL HO, and COLO 679 cell lines, and to show that this antitumor action occurs through the NK-1 receptor; and (2) To investigate whether the NK-1 receptor antagonist L-732,138 produces apoptosis in the three melanoma cell lines studied.

Cell proliferation was evaluated using the tetrazolium compound 3-(4, 5-dimethylthiazol-2-yl)-5-(3-carboxymethoxyphenyl)2-(4-sulfophenyl)-2H-tetrazolium, inner salt (MTS), according to the manufacturer’s instructions (CellTiter 96 Aqueous One Solution Cell Proliferation Assay, Promega Corp., Madison, USA). Cell numbers were quantified using a Coulter counter. The plate included blank wells (0 cells/0.1 mL), control wells (104 cells/0.1 mL), control wells with DMSO, control wells treated with L-732,138 and control wells treated with the most effective SP concentration and L-732,138. The plates were inoculated with L-732,138 (10-100 µM for tumor cell lines) and were incubated for the first doubling time specific for each tumor cell line. Moreover, control wells were treated with different concentrations of SP. For the proliferation assay, 20 µL of the MTS reagent was added to each well 90 min before reading the samples on a multiscanner microplate reader (TECAN Spectra classic, Barcelona, Spain) at 492 nm. Each experimental condition was assayed in duplicate and all experiments were performed at least three times.

Data were expressed as means ± SD. Statistical analysis was performed with SPPS statistical software for Microsoft Windows, release 14.0 (Professional Statistic, Chicago, IL). The homogeneity of the variance was tested using the Levene test. If the variances were homogeneous, the data were analyzed by using the one-way ANOVA test with Bonferroni’s correction for multiple comparisons. For data sets with non-homogeneous variances, the ANOVA test with T3 Dunnett posthoc analysis was applied. The criterion for significance was P < 0.05 for all comparisons.

In order to determine whether apoptosis was induced by the NK-1 receptor antagonist L-732,138, DAPI staining was performed. Briefly, after treatment with L-732,138 for their first doubling time approximately, the cells were fixed in 4% paraformaldehyde. Following a second wash in PBS, cells were incubated in 1 μg/mL DAPI solution (Sigma-Aldrich) for 30 min in the dark. The cells were then observed under a fluorescence microscope (Zeiss, Oberkochen, Germany). Apoptotic cells were defined by the chromatin condensation and nuclear fragmentation. We counted the number of apoptotic cells. In each case, the count was repeated in three different slides. Finally, in each slide, we counted the number of apoptotic cells located in five different sequentially fields.

Table 1. Half inhibition (IC50) and maximum inhibition (IC100) of melanoma cell lines after administration of the NK-1 receptor antagonist L-732,138.

After the administration of different doses of SP, our group has previously reported an increase in the growth of the three melanoma cell lines studied here [9]. In order to examine whether the NK-1 receptor antagonist L-732,138 inhibited melanoma cell proliferation via an interaction with its receptor, we used the specific NK-1 receptor agonist SP in competition experiments (Figure 2). Here, the cellular concentration at IC50 µM of L-732,138 and nM of SP was lower than that observed with different doses of SP alone for the melanoma cell lines studied here. These results indicate that L-732,138 blocks SP mitogen stimulation. Moreover, L-732,138-induced growth inhibition was partially reversed by the administration of the most mitogenic nanomolar dose of exogenous SP. These data indicate the specificity of the NK-1 receptor activation in the growth of the melanoma cell lines by SP, since an increase in the cellular concentration was observed in the cell lines studied with respect to the values found when the antagonist was administered alone (Figure 2). 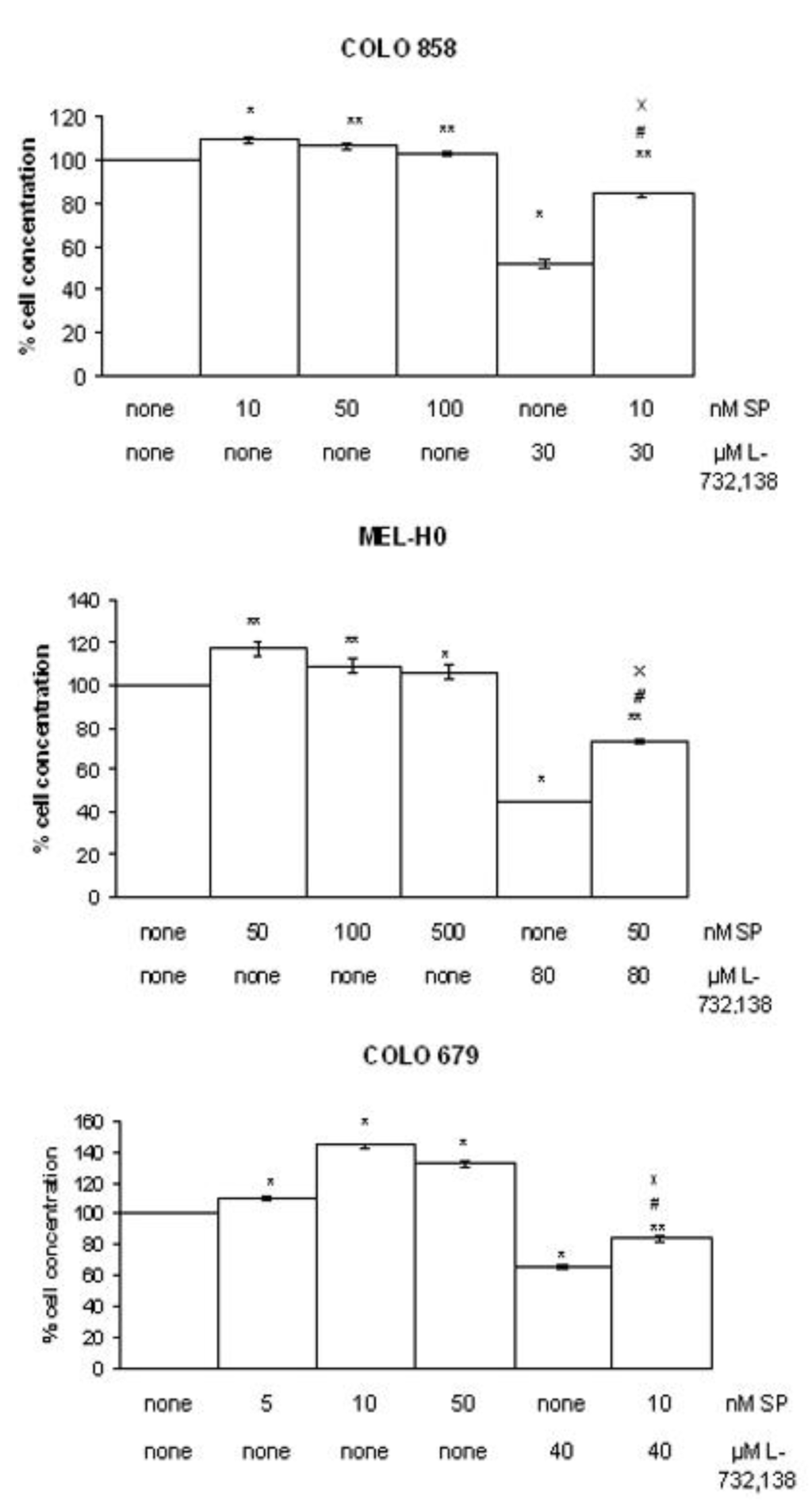 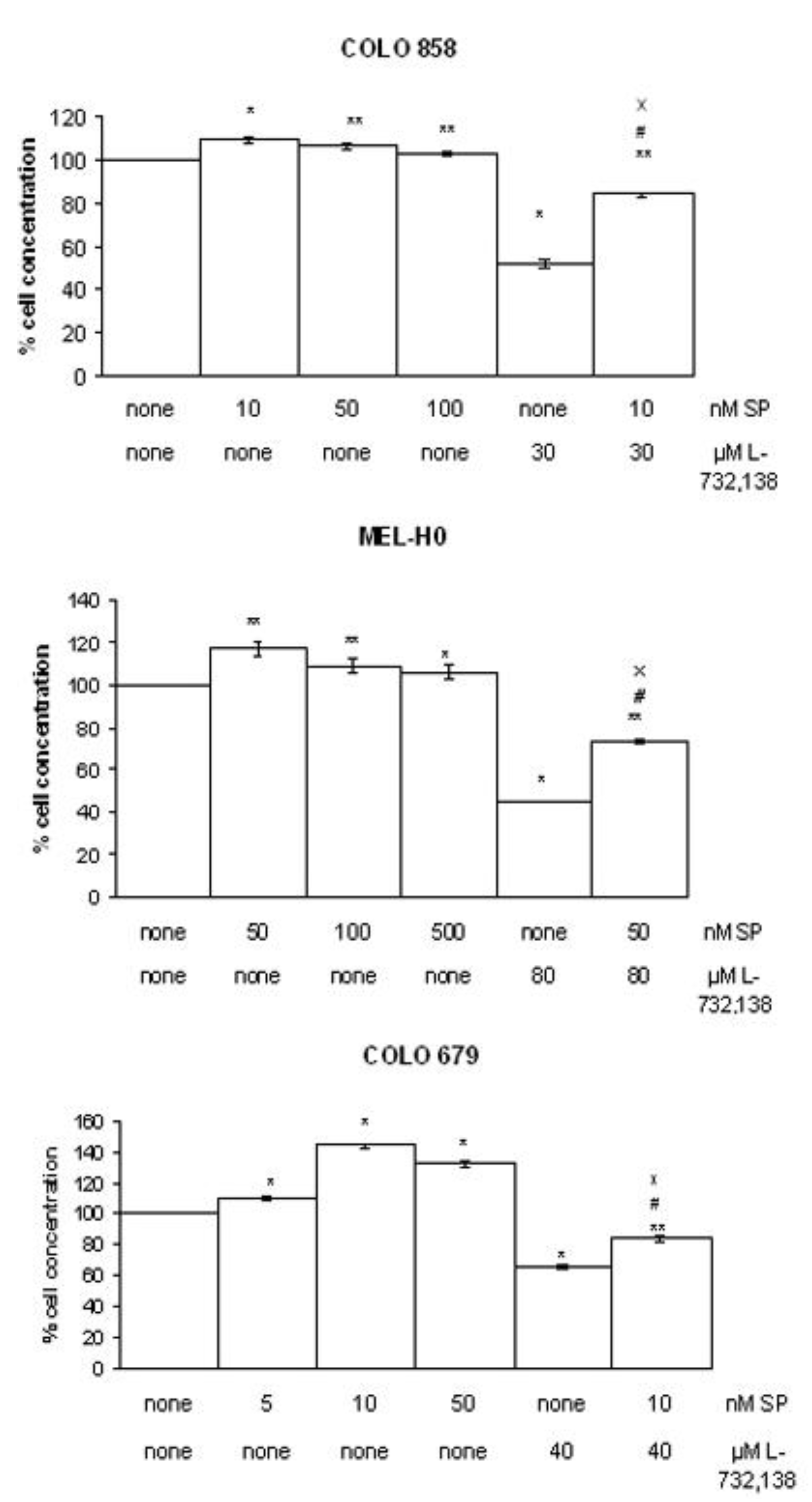 This work was supported by the Consejería de Innovacion, Ciencia y Empresa of the Junta de Andalucía (CTS-2247, Spain).