(1) Background: EBV-positive and mismatch repair-deficient (MMRd) gastric cancers (GCs) show higher levels of tumor-infiltrating lymphocytes (TILs) and PD-L1 expression and thus a more profound response to immunotherapy. However, the majority of GCs are EBV-negative (EBV−) and MMR proficient (MMRp). We analyzed PD-L1 expression and TILs in EBV-MMRpGCs in comparison to EBV-positive (EBV+) and MMRdGCs to identify an immunogenic phenotype susceptible to immunotherapy. (2) Methods: A next-generation tissue microarray of 409 primary resected GCs was analyzed by Epstein-Barr encoding region (EBER) in situ hybridization for MSH1, PMS2, MSH2, MSH6, PD-L1, and CD8 immunohistochemistry. PD-L1 positivity was defined as a combined positive score (CPS) of ≥1. CD8+ TILs and their proximity to cancer cells were digitally analyzed on the HALO™ image analysis platform. (3) Results: Eleven cases were EBV+, 49 cases MMRd, and 349 cases EBV-MMRpGCs. The highest rate of PD-L1 positivity was seen in EBV+GCs, followed by MMRdGCs and EBV-MMRpGCs (81.8%, 73.5%, and 27.8%, respectively). EBV+ and MMRdGCs also demonstrated increased numbers and proximity of CD8+ TILs to tumor cells compared to EBV-MMRpGCs (p < 0.001 each). PD-L1 status positively correlated with the total numbers of CD8+ TILs and their proximity to tumor cells in all subtypes, including EBV-MMRpGCs (p < 0.001 each). A total of 28.4% of EBV-MMRpGCs showed high CD8+ TILs independent of PD-L1. (4) Conclusions: PD-L1 and CD8 immunohistochemistry, supplemented by digital image analysis, may identify EBV-MMRpGCs with high immunoreactivity indices, indicating susceptibility to immunotherapy. View Full-Text
Keywords: gastric cancer; PD-L1; TIL; EBV; MMR; MSI; immunotherapy gastric cancer; PD-L1; TIL; EBV; MMR; MSI; immunotherapy
►▼ Show Figures 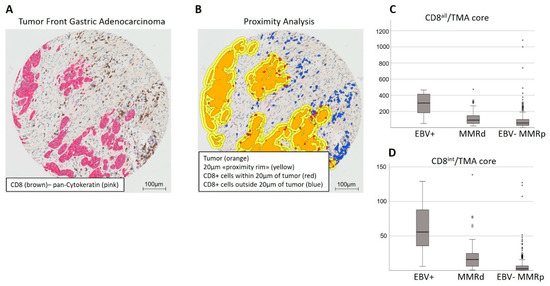