Making the Most of Complexity to Create Opportunities: Comprehensive Genomic Profiling and Molecular Tumor Board for Patients with Non-Small Cell Lung Cancer (NSCLC)

Evaluation of the prognostic significance of serial measurements of serum concentrations of Krebs von den Lungen-6 (KL-6) showed that an annual increment in KL-6 exceeding a threshold amount was an independent risk factor for progressive disease and poor prognosis. No literature data are available on long-term KL-6 measurements in the follow-up of IPF patients treated with Nintedanib. The aim of this study is to serially analyze KL-6 in idiopathic pulmonary fibrosis (IPF) patients after 24 months of Nintedanib and to investigate its biomarker potential in patients with IPF and lung cancer with respect to fibrotic hypersensitivity pneumonitis patients, pulmonary fibrosis associated with autoimmune diseases group and healthy controls.

Krebs von den Lungen-6 (KL-6) is a high-molecular-weight (200 kDa) glycoprotein predominantly expressed in the lungs by injured and regenerating alveolar type II cells [1,2]. KL-6 was first suggested as a serum biomarker for lung, breast, and pancreatic cancer, but showed lower diagnostic accuracy than other tumor markers, such as carcinoembryonic antigen (CEA), a reliable predictor of treatment response in non-small-cell lung cancer [3]. Subsequently, KL-6 was proposed as a diagnostic biomarker for differentiating interstitial lung diseases (ILDs) and predicting response to antifibrotic therapy [4,5,6]. A cut-off value of 465 U/mL was recently established to distinguish ILD patients from the healthy subjects and patients with other non-fibrotic lung diseases [7], however the potential value of KL-6 as a biomarker in the differential diagnosis of ILDs is still limited [8,9]. In 1999, the Japanese Health Insurance Program approved serum KL-6, measured by a chemiluminescent enzyme immunoassay (CLEIA), as a diagnostic marker of ILDs. The assay is not yet available in Western European countries, including Italy.
Serum concentrations of KL-6 have been found elevated in ILDs, including idiopathic pulmonary fibrosis (IPF), a disease characterized by alveolar epithelial cell damage and progressive interstitial thickening [5,8,9,10]. IPF is a chronic progressive ILD of unknown etiology, occurring primarily in older adults. It is limited to the lungs and characterized by a radiological and histopathological pattern of usual interstitial pneumonia [11,12]. IPF shares various genetic, molecular, and cell processes with lung cancer [13]. Today, an “antifibrotic” approach is widely accepted and the only drugs approved for the treatment of IPF are pirfenidone and Nintedanib [14,15]. Nintedanib, a tyrosine-kinase inhibitor, was first developed as an anticancer drug because it suppresses angiogenesis, but it was later recognized as an anti-fibrotic agent and approved for the treatment of IPF [16]. No single reliable biomarker is available to predict disease progression or response to treatment, or for differential diagnosis of IPF with respect to other fibrotic diseases, such as non-specific interstitial pneumonia and hypersensitivity pneumonitis [17,18]. Some authors have suggested that evaluation of serum concentrations of KL-6 at disease onset (above or below the cut-off 1000 U/mL) can predict survival in patients with IPF [8,19,20]. Fluctuations in KL-6 during follow-up of IPF patients have also been reported to have potential for predicting functional progression of the disease. Evaluation of the prognostic significance of serial measurements of serum concentrations of KL-6 showed that an annual increment in KL-6 exceeding a threshold amount was an independent risk factor for progressive disease and poor prognosis [4,5]. This finding sustains the fundamental value of serial monitoring of KL-6 during follow-up and of monitoring response to treatment.
To our knowledge, no data are available in the literature on long-term KL-6 measurements in the follow-up of IPF patients treated with Nintedanib. The aim of this study was to serially analyze KL-6 in IPF patients after 24 months of Nintedanib and to investigate its biomarker potential in patients with IPF and lung cancer with respect to fibrotic hypersensitivity pneumonitis, pulmonary fibrosis associated with autoimmune diseases patients and healthy controls.

The present study aimed [1] to serially analyze KL-6 in IPF patients after 24 months of Nintedanib and [2] to investigate its biomarker potential in patients with IPF-LC with respect to fHP, PF-AD patients, and healthy controls.
KL-6 has been widely investigated as a specific marker of progressive fibrotic ILD, including IPF. Yokoyama et al. suggested that serum concentrations of KL-6 at disease onset (above or below a cut-off of 1000 U/mL) can predict survival of IPF patients [8]. Ishii et al. demonstrated in an IPF population that high baseline concentrations of KL-6 were related to significantly worse survival than low baseline concentrations [19]. Satoh et al. also associated serum KL-6 >1000 U/mL with poor prognosis of IPF patients [20], suggesting that elevated KL-6 levels may provide valuable information for phenotyping ILD patients at high risk of mortality [20]. Unfortunately, no data are available on the predictive value of KL-6 in IPF associated with lung cancer.
Fluctuations in serum concentrations of KL-6 during follow-up of IPF patients were recently suggested to have potential for predicting functional disease progression and response to treatment [4,5]. The prognostic significance of serial measurements of KL-6 was evaluated by Wakamatsu et al. in a pioneering study demonstrating that an annual increment in KL-6 exceeding a certain threshold was an independent risk factor for progressive disease and poor prognosis. These authors sustain the fundamental value of serial KL-6 monitoring in the follow-up of IPF [5]. A few months ago, our group performed serial measurements of serum KL-6 in IPF patients after 6 and 12 months of Nintedanib treatment, demonstrating that KL-6 may be a useful prognostic biomarker of IPF progression and response to Nintedanib. This biomarker was demonstrated to have clinical utility in monitoring IPF patients under specific antifibrotic treatments [4]. The study demonstrated that IPF patients treated with Nintedanib for one year maintained stable FVC percentages and KL-6 concentrations with respect to baseline [4]. The present study confirmed these results over a longer follow-up period: IPF patients were monitored for 24 months after starting Nintedanib. Interestingly, only those patients showing persistently elevated levels of KL-6 after two years of antifibrotic therapy showed a progressive decline in FVC percentages.
Lung cancer is a major comorbidity of IPF patients. To our knowledge, this is the first study to monitor serum concentrations of KL-6 in a cohort of IPF patients with adenocarcinoma. This preliminary population is of interest because higher KL-6 concentrations were recorded in IPF-LC patients than in the IPF and fHP groups, demonstrating that KL-6 may be a useful prognostic biomarker, predictive of IPF progression.
Very high KL-6 concentrations were first documented in the serum of IPF patients with histological evidence of lung cancer. The negative prognostic value of this result was clearly demonstrated by the fact that 2 years later, only 2/12 (16%) IPF-LC patients were still alive. Although the number of patients was limited, the demonstration of elevated KL-6 concentrations in the specific IPF-LC phenotype is of interest, because the prognosis of patients with this very rare association of lung diseases is unclear. Patients with IPF have five times the risk of the general population of developing lung cancer. Despite a few studies looking for relationships between these two severe lung diseases, diagnostic and therapeutic management of patients is still a challenge and no specific prognostic biomarker has yet been found.

One hundred and forty-two ILD patients (median (IQR), 69 (63–75) years; 86 males), monitored at Siena Regional Referral Centre for Sarcoidosis and other Interstitial Lung Diseases, were retrospectively enrolled. We selected patients with IPF treated with Nintedanib for at least two years (n = 10; median (IQR), 77 (67–80) years; 8 males), IPF-LC with a histological diagnosis of adenocarcinoma (n = 12; median (IQR), 72 (65–75) years; 9 males), fHP with histological confirmation (n = 14; median (IQR), 67 (57–72) years; 8 males) and PF-AD (rheumatoid arthritis, n = 10, median (IQR), 65 (55–66) years, 4 males; systemic sclerosis, n = 12, median (IQR), 62 (56–68) years, 5 males). We excluded patients with non-histologically confirmed diagnosis of lung cancer and with a follow-up inferior to 24 months for nintedanib treatment. We also excluded fibrotic HP patients without any histological confirmation diagnosis. The diagnosis of IPF was confirmed by multidisciplinary discussion. Adenocarcinoma was diagnosed histologically according to WHO 2015 criteria [21,22]. Twelve healthy controls (median age (IQR) 63 years (52–65); 5 males) were also enrolled.
Serial serum samples were collected from IPF patients before starting antifibrotic therapy (t0), and 12 (t1) and 24 months (t2) later. Lung function tests and high-resolution computed tomography (HRCT) of the chest were performed in all patients for diagnostic purposes. The former were repeated according to our center’s follow-up protocol and performed according to ATS/ERS standards [23] using a Jaeger body plethysmograph with corrections for temperature and barometric pressure. Forced expiratory volume in the first second (FEV1), FVC and diffusing capacity of the lung for carbon monoxide (DLCO) were recorded.
Demographic and clinical data, including comorbidities, family history, lung function parameters, and radiological features were collected from medical records and entered in an electronic database for statistical analysis. Healthy controls and patients gave their written informed consent to participation in the study, which was approved by our local ethics committee (C.E.A.V.S.E. Tuscany, Markerlung number 17431).

Serum samples from all patients were assayed for KL-6 concentrations by KL-6 reagent assay (Fujirebio Europe, Gand, Belgium), as previously reported [6,24,25,26,27,28,29,30,31]. The principle of the assay is agglutination of sialylated carbohydrate antigen in samples with KL-6 mAb by antigen–antibody reaction. The change in absorbance was measured to determine KL-6 levels. Serum concentrations of KL-6 were expressed in U/mL.

Data are presented as median and interquartile range (IQR). Non-parametric tests (Kruskal–Wallis test and Dunn’s multiple test) were used for comparisons among the four groups (IPF, IPF-LC, fHP and healthy controls). The Chi-squared test was used for categorical variables as appropriate. Serum concentrations of KL-6 were also compared between groups, assessing areas (AUC) under the receiver operating characteristic (ROC) curves. A p-value less than 0.05 was considered statistically significant. All statistical analysis and related figures were obtained using GraphPad Prism 9.0 software.

The study was conducted according to the guidelines of the Declaration of Helsinki, and approved by the Local Ethical Committee of Comitato Etico Regione Toscana Area Vasta Sud Est (C.E.A.V.S.E.) (protocol code 17431, 15-06-2020).

Data is contained within the article or supplementary material. 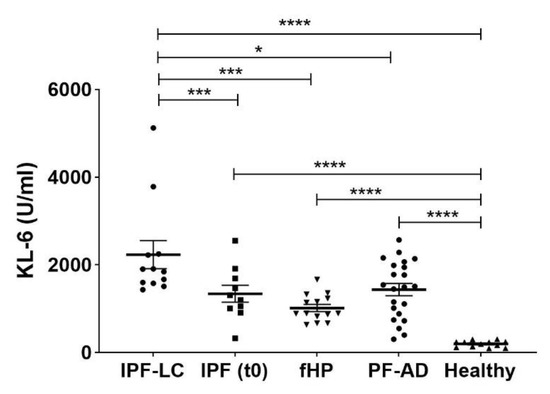 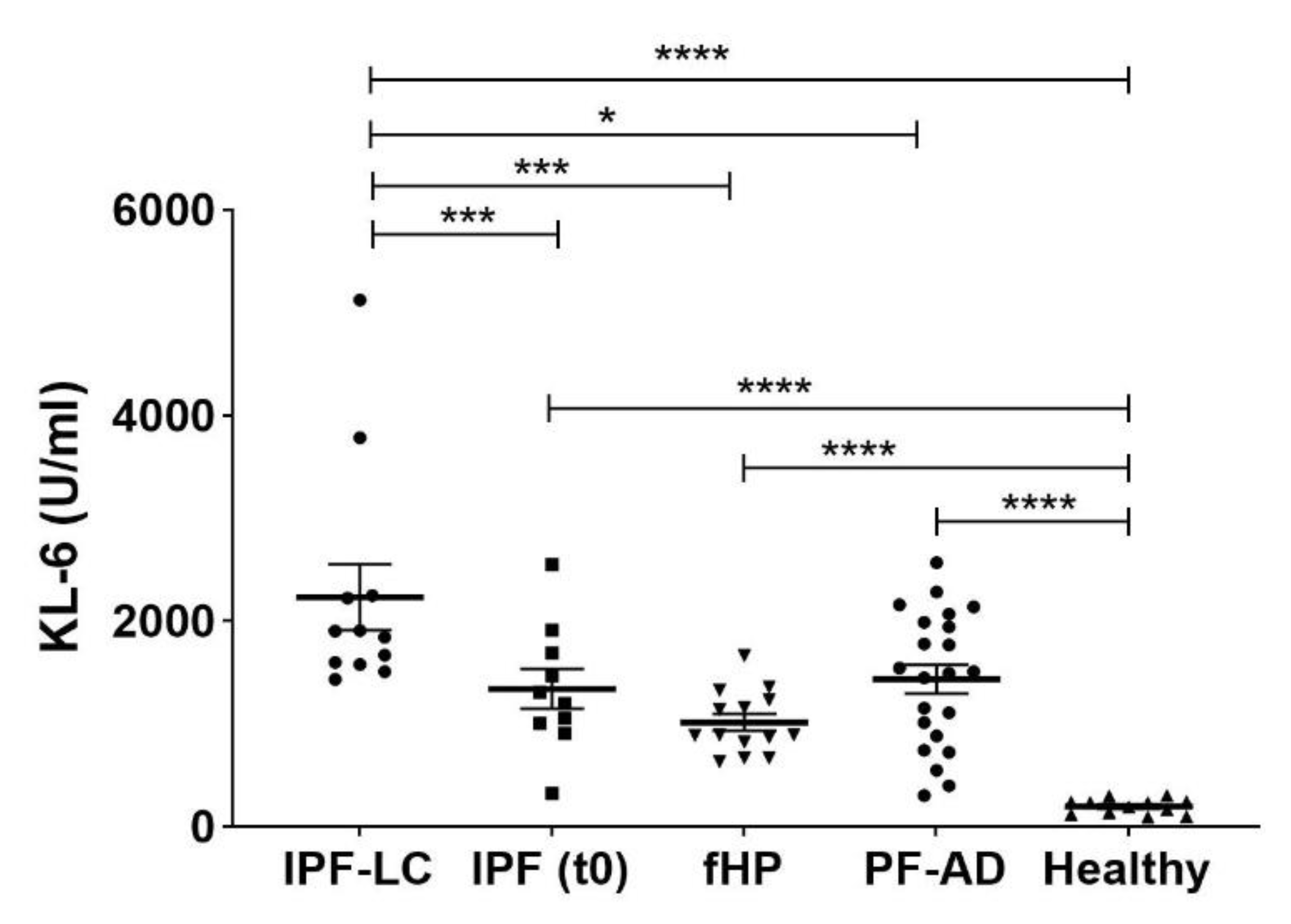 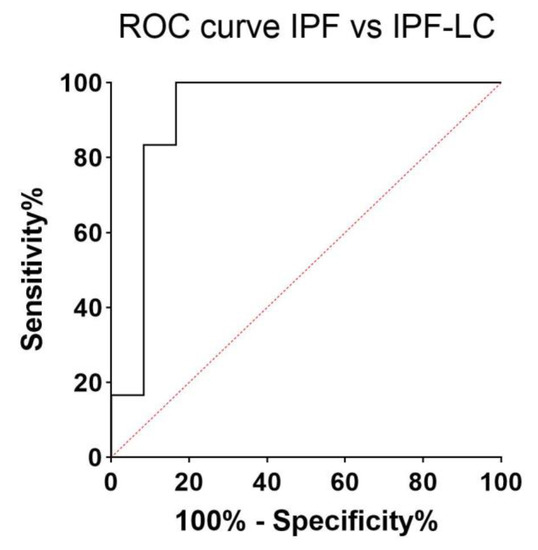 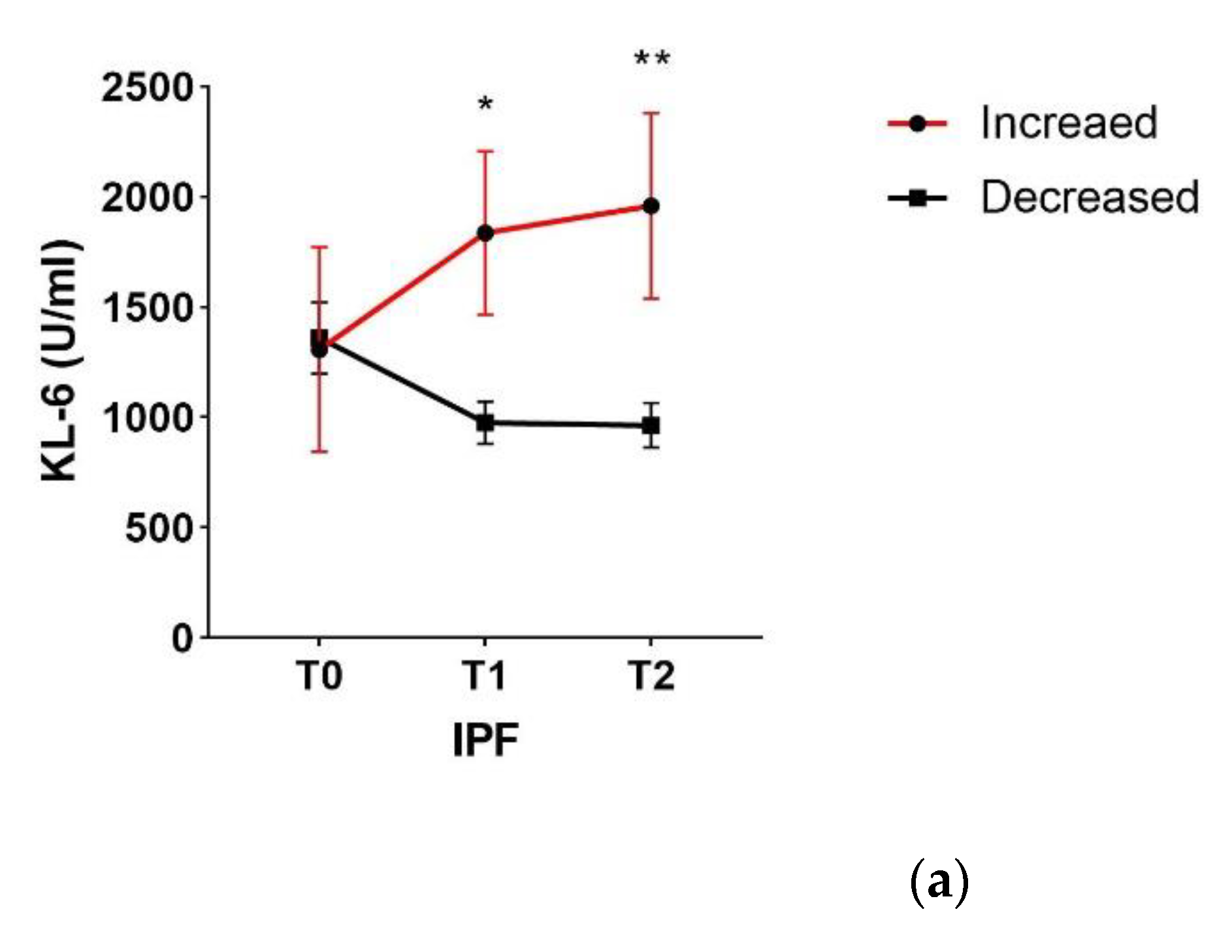