TGF-β in Cancer: Metabolic Driver of the Tolerogenic Crosstalk in the Tumor Microenvironment
Previous Article in Journal

Advances in Nanocarriers for Effective Delivery of Docetaxel in the Treatment of Lung Cancer: An Overview

In Australia, all cancers are recorded in the Australian Cancer Database. We used pathological and anatomical classification codes to identify cases of brain lymphoma—termed primary central nervous system lymphoma or PCNSL—that had occurred in Australia during the past four decades. This allowed us to calculate the incidence of PCNSL, as well as the overall survival after diagnosis with this lymphoma. PCNSL is rare, recently affecting approximately 4 per one million adult Australians per year. However, the number of people diagnosed with this cancer is increasing. Survival of people diagnosed with PCNSL has been improving, but is still low, with only 33% of people alive at 5 years after receiving this diagnosis. As the first survey of the incidence of PCSNL in Australia and the survival of Australians diagnosed with this rare cancer, our research supports current efforts to understand risk factors and improve outcomes.

Primary central nervous system lymphoma (PCNSL) is a rare brain cancer that remains challenging to study. Epidemiology of PCNSL in the Australian population, which is racially and ethnically diverse, has not been examined previously. Using ICD-O-3.1 Morphology and Topography Codes to identify cases, we analyzed complete datasets from the comprehensive Australian Cancer Database (1982–2014, adults aged ≥ 20 years) to establish incidence rates and trends of PCNSL, and to define survival outcomes of individuals diagnosed with PCNSL, including the predominant diffuse large B-cell lymphoma (DLBCL) type. Age-standardized incidence of PCNSL increased by an average annual 6.8% percent over the study period, with current incidence of 0.43 (95% confidence interval, 0.41–0.46) per 100,000 person-years, in comparison to 21.89 (21.41–22.38) per 100,000 person-years for non-CNS lymphoma. Increase in incidence was characterized by an acute rise between 1996 and 1999, was more pronounced with increasing age, and was driven by increasing incidence of DLBCL. Overall survival for persons diagnosed with PCNSL improved significantly across the study period, with 5-year survival probability increasing from 0.21 (95% confidence interval, 0.16–0.26) to 0.33 (0.30–0.36), and median survival increasing from 318 to 600 days, between 1982–1999 and 2000–2014. Increase in survival was significantly higher for persons with DLBCL versus non-DLBCL PCNSL, but substantially lower than that for persons with non-CNS lymphoma, who had a 5-year survival probability of 0.62 (0.62–0.62) and a median survival of 3388 days in 2000–2014. This study links increasing incidence of PCNSL in Australia to increasing incidence of DLCBL, including in younger adults, and highlights the improving, but low, survival outcome of this cancer. View Full-Text
Keywords: central nervous system; Lymphoma; diffuse large B-cell lymphoma; incidence; survival central nervous system; Lymphoma; diffuse large B-cell lymphoma; incidence; survival
►▼ Show Figures 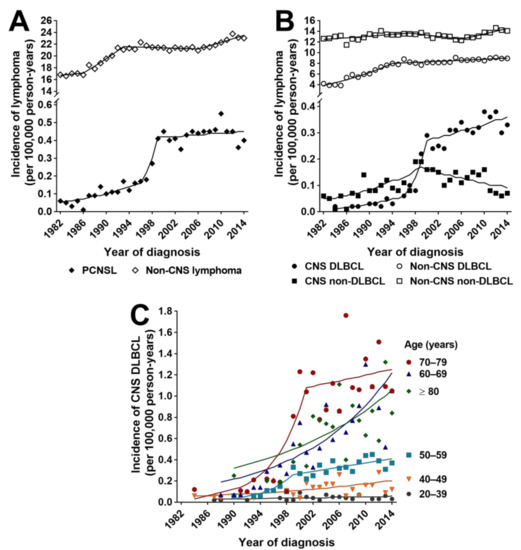