Crizotinib Resistance Mediated by Autophagy Is Higher in the Stem-Like Cell Subset in ALK-Positive Anaplastic Large Cell Lymphoma, and This Effect Is MYC-Dependent
Previous Article in Journal

Despite a relationship between immune dysregulation and the course of myelodysplastic syndromes (MDS) has been discussed, a detailed understanding of this phenomenon is still missing. Therefore, multiplex analyses of bone marrow biopsies (BMB) from patients with MDS and secondary acute myeloid leukemia (sAML) were performed in order to determine the repertoire of lymphocyte subpopulations and their distance to CD34+ blasts. In MDS and sAML samples, the composition, quantity, and spatial proximity of immune cell subsets to CD34+ blasts were heterogeneous and correlated to the blast counts, but not to the genetics of the diseases, while in non-neoplastic BMB no CD8+ and FOXP3+ T cells and only single MUM1p+ B/plasma cells were detected in a distance of ≤10 μm to CD34+ hematopoietic progenitor cells (HPSC). We conclude that CD8+ and FOXP3+ T cells are not part of the immediate surrounding of CD34+ HPSC.

Background: Myelodysplastic syndromes (MDS) are caused by a stem cell failure and often include a dysfunction of the immune system. However, the relationship between spatial immune cell distribution within the bone marrow (BM), in relation to genetic features and the course of disease has not been analyzed in detail. Methods: Histotopography of immune cell subpopulations and their spatial distribution to CD34+ hematopoietic cells was determined by multispectral imaging (MSI) in 147 BM biopsies (BMB) from patients with MDS, secondary acute myeloid leukemia (sAML), and controls. Results: In MDS and sAML samples, a high inter-tumoral immune cell heterogeneity in spatial proximity to CD34+ blasts was found that was independent of genetic alterations, but correlated to blast counts. In controls, no CD8+ and FOXP3+ T cells and only single MUM1p+ B/plasma cells were detected in an area of ≤10 μm to CD34+ HSPC. Conclusions: CD8+ and FOXP3+ T cells are regularly seen in the 10 μm area around CD34+ blasts in MDS/sAML regardless of the course of the disease but lack in the surrounding of CD34+ HSPC in control samples. In addition, the frequencies of immune cell subsets in MDS and sAML BMB differ when compared to control BMB providing novel insights in immune deregulation. View Full-Text
Keywords: MDS; immune cell repertoire; prognosis; multiplex immunohistochemistry; CD34+ blasts MDS; immune cell repertoire; prognosis; multiplex immunohistochemistry; CD34+ blasts
►▼ Show Figures 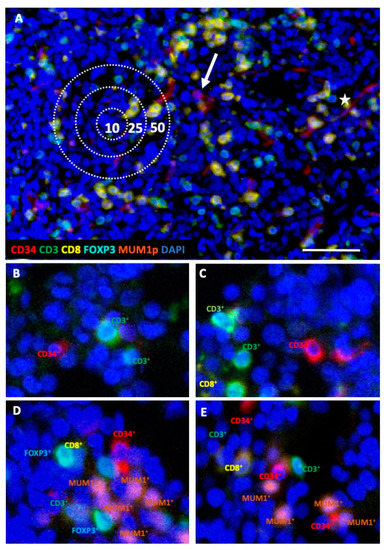