Epigenetic Regulation of MicroRNA Clusters and Families during Tumor Development

Understanding early events occurring during Pancreatic Ductal Adenocarcinoma (PDAC) establishment can be of huge relevance for improving its dramatic clinical outcome. Intraductal Papillary Mucinous Neoplasms (IPMN) are pancreatic duct lesions associated with increased risk of developing PDAC. MicroRNAs (miRNAs) are small non-coding RNAs significantly altered in IPMN and PDAC that repress mRNA expression. In this study, we have explored negative correlations between miRNA and mRNA expression data in IPMN that are maintained in PDAC, to purpose potential miRNA-mRNA pairs. Relevant negative correlations have been validated via RT-qPCR in an independent cohort of 40 patients. In-situ hybridization of top-correlated miR-181a and immunohistochemistry of its purposed pairs (EPB41L4B and SEL1L), plus validation in a cellular model of immortalized human pancreatic epithelial ductal cells overexpressing this miRNA has been performed. Overall, these results offer new insights into the implications of miRNA alteration in the IPMN-to-PDAC progression.

Intraductal papillary mucinous neoplasms (IPMN) are pancreatic cystic lesions that can develop into pancreatic ductal adenocarcinoma (PDAC). Although there is an increasing incidence of IPMN diagnosis, the mechanisms of formation and progression into invasive cancer remain unclear. MicroRNAs (miRNAs) are small non-coding RNAs, repressors of mRNA translation, and promising diagnostic biomarkers for IPMN and PDAC. Functional information on the role of early-altered miRNAs in this setting would offer novel strategies for tracking the IPMN-to-PDAC progression. In order to detect mRNAs that are likely to be under miRNA regulation in IPMNs, whole transcriptome and miRNome data from normal pancreatic tissue (n = 3) and IPMN lesions (n = 4) were combined and filtered according to negative correlation and miRNA-target prediction databases by using miRComb R package. Further comparison analysis with PDAC data allowed us to obtain a subset of miRNA-mRNA pairs shared in IPMN and PDAC. Functional enrichment analysis unravelled processes that are mainly related with cell structure, actin cytoskeleton, and metabolism. MiR-181a appeared as a master regulator of these processes. The expression of selected miRNA-mRNA pairs was validated by qRT-PCR in an independent cohort of patients (n = 40), and then analysed in different pancreatic cell lines. Finally, we generated a cellular model of HPDE cells stably overexpressing miR-181a, which showed a significant alteration of actin cytoskeleton structures accompanied by a significant downregulation of EPB41L4B and SEL1L expression. In situ hybridization of miR-181a and immunohistochemistry of EPB41L4B and SEL1L in pancreatic tissues (n = 4 Healthy; n = 3 IPMN; n = 4 PDAC) were also carried out. In this study, we offer insights on the potential implication of miRNA alteration in the regulation of structural and metabolic changes that pancreatic cells experience during IPMN establishment and that are maintained in PDAC. View Full-Text
Keywords: pancreatic cancer; pancreatic cyst; premalignant lesion; cancer progression; gene regulation; cell structure; miR-181a; stress fibers; circumferential actomyosin belt pancreatic cancer; pancreatic cyst; premalignant lesion; cancer progression; gene regulation; cell structure; miR-181a; stress fibers; circumferential actomyosin belt
►▼ Show Figures 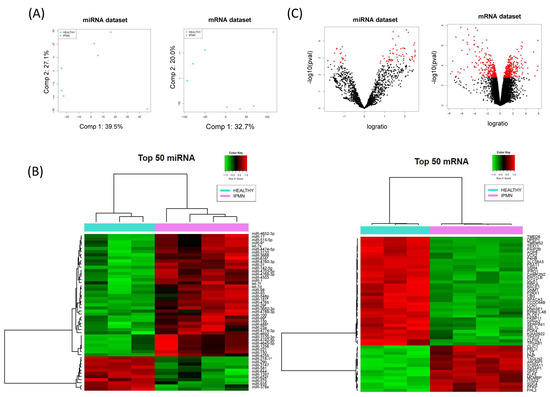