:
In symptomatic acute pulmonary embolism (PE), the presence of deep vein thrombosis (DVT) is a risk factor for 30- and 90-day mortality. In patients with cancer and incidental PE, the prognostic effect of concomitant incidental DVT is unknown. In this retrospective study, we examined the effect of incidental DVT on all-cause mortality in such patients. Adjusted Cox multivariate regression analysis was used for relevant covariates. From January 2010 to March 2018, we included 200 patients (mean age, 65.3 ± 12.4 years) who were followed up for 12.5 months (interquartile range 7.4–19.4 months). Of these patients, 62% had metastases, 31% had concomitant incidental DVT, and 40.1% (n = 81) died during follow-up. All-cause mortality did not increase in patients with DVT (hazard ratio [HR] 1.01, 95% confidence interval [CI] 0.43–2.75, p = 0.855). On multivariate analysis, weight (adjusted HR 0.96, 95% CI 0.92–0.99, p = 0.032), and metastasis (adjusted HR 10.26, 95% CI 2.35–44.9, p = 0.002) were predictors of all-cause mortality. In conclusion, low weight and presence of metastases were associated with all-cause mortality, while presence of concomitant DVT was unrelated to poorer survival.
Keywords:
neoplasm; incidental; pulmonary embolism; venous thromboembolism; mortality; prognosis

In total, we evaluated 234 patients with incidental PE, 34 of whom were excluded because they did not have a diagnosis of cancer (Figure 1). In the final cohort comprising 200 patients, 62 (31%) patients had concomitant incidental DVT. The mean patient age was 65.3 ± 12.4 years (mean ± standard deviation), 62.2% had metastatic disease, and 67.5% were receiving oncological treatment at the time of the thrombotic event. All included patients had a histologically confirmed diagnosis of cancer, and the most observed cancer types were colorectal cancer (29.5%), lung cancer (17.5%), and breast cancer (8%). Baseline patient characteristics are shown in Table 1. The median duration from cancer diagnosis to VTE development was 5.8 months (interquartile range [IQR] 2.8–22.2 months). The median follow-up duration was 12.5 months (IQR 7.4–19.4 months). In total, 199 of 200 patients (99.5%) received low molecular weight heparin (LMWH) and most patients (198/199) received the therapeutic dose.
A comparison of patients with and without DVT indicated that those with concomitant DVT had a significantly higher prevalence of metastasis (72.4% vs. 57.5%, respectively; odds ratio [OR] 1.87, 95% confidence interval [CI] 1.01–3.19). Furthermore, at the time of the diagnosis of incidental PE, 75.8% of patients with concomitant DVT were receiving oncological treatment compared with 62.3% in the DVT-free group (OR 1.9, 95% CI 1.06–3.39). The most frequent cancer treatments involved antimetabolites (47.5%), followed by platinum-based agents (35%). Among patients with cancer who had undergone treatment, 22.5% had been prescribed one drug, 33% had been prescribed two drugs, and 11% had been prescribed ≥3 drugs. Patient characteristics according to survival (no-death vs. death) are shown in Table 2.

This retrospective study used prospective data from consecutive inpatients and outpatients with VTE. The study was conducted in accordance with the Declaration of Helsinki, and the study protocol was approved by the Ethics Committee of Virgen del Rocio Hospital, Sevilla, Spain (Approval No. 1283-N-18). The requirement for written patient informed consent was waived due to the study design.

The participants of this study were recruited from among the inpatients and outpatients of a respiratory ward at a teaching hospital in Sevilla, Spain, between January 2010 and March 2018.

This study included consecutive patients with an objectively confirmed diagnosis of incidental PE, based on a positive chest computed tomography (CT) result. Patients who were unable to attend follow-up due to geographical challenges and those aged <18 years old were excluded. Histological confirmation was required for all patients diagnosed with cancer. Major bleeding was assessed according to the following International Society of Thrombosis and Hemostasis (ISTH) criteria: fatal bleeding, and/or bleeding in a critical area or organ such as intracranial, intraspinal, intraocular, retroperitoneal, intra-articular or pericardial, or intramuscular organs with compartment syndrome, and/or bleeding causing a fall in hemoglobin level of ≥20 g/L or leading to transfusion of two or more units of whole blood or red blood cells [38]. The Eastern Cooperative Oncology Group (ECOG) performance status was used as a scale to assess the patient’s disease progression, to assess how the disease affected the patient’s activities of daily living, and to determine appropriate treatment and prognosis.

Once the patients were diagnosed with PE, trained staff performed bilateral proximal and distal lower limb deep venous system compression ultrasonography in all patients at the time of their hospital consultation. The diagnostic criterion for DVT was the non-compressibility of a region within the deep venous system.

Quantitative variables were expressed as means ± standard deviations. Medians and interquartile ranges (IQR) were used for non-normally distributed continuous data, and numbers and proportions for categorical data. We calculated Kaplan–Meier probabilities to estimate time to death and time to VTE recurrence, and a log-rank test was performed to assess differences between the groups. We censored for loss to follow-up (none) and study completion in the survival analyses. In addition, we controlled VTE recurrence models censored for death. To evaluate the association between concomitant DVT at the time of PE presentation, we performed a Cox proportional hazard regression analysis. In the full model, we included variables with a potential prognostic role in addition to the presence of incidental DVT. Backward stepwise regression was carried out to obtain the adjusted final model, with the variables selected in the equation in the last step. For all analyses, statistical significance was defined at a p-value of <0.05. The 95% CI was calculated using the Clopper–Pearson exact method. Binomial distribution using Statistical Package for the Social Sciences (SPSS) Statistics version 20.0 (IBM, Chicago, IL, USA) was employed, and all statistical analyses were performed using IBM SPSS Statistics version 24.0 software. 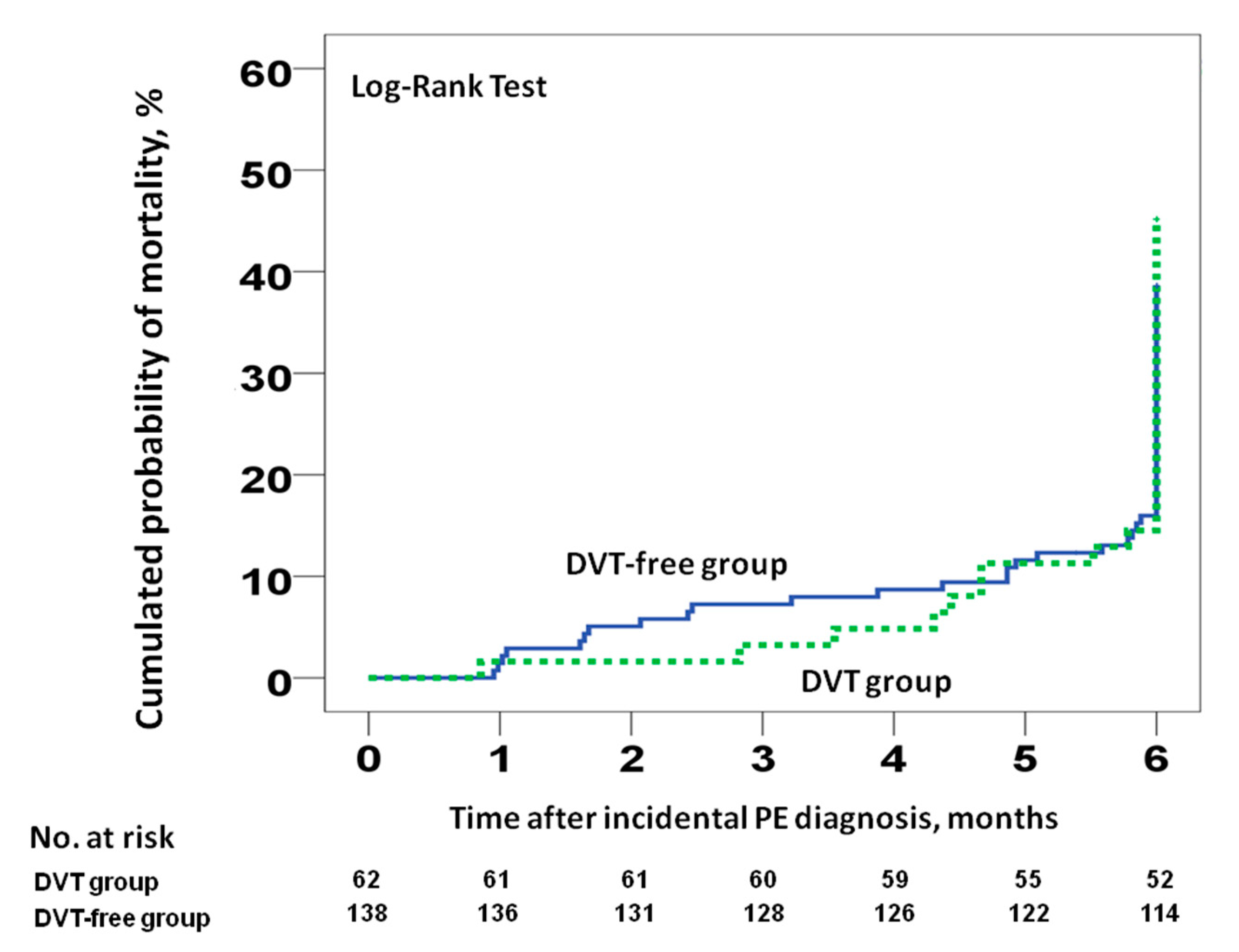 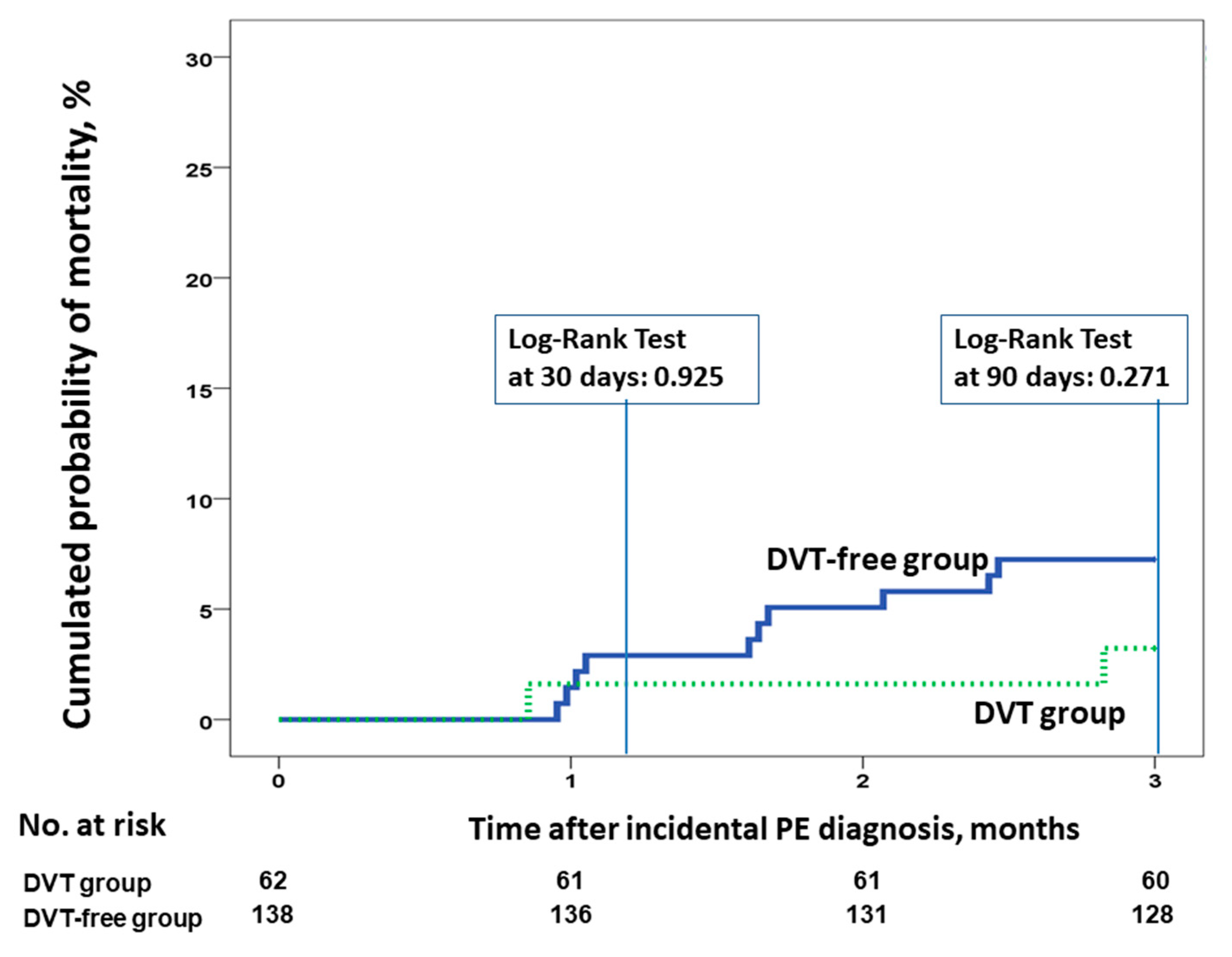