Pancreatic ductal adenocarcinomas (PDAC) belong to the deadliest malignancies in the western world. Mutations in TP53 and KRAS genes along with some other frequent polymorphisms occur almost universally and are major drivers of tumour initiation. However, these mutations cannot explain the heterogeneity in therapeutic responses and differences in overall survival observed in PDAC patients. Thus, recent classifications of PDAC tumour samples have leveraged transcriptome-wide gene expression data to account for epigenetic, transcriptional and post-transcriptional mechanisms that may contribute to this deadly disease. Intriguingly, long intervening RNAs (lincRNAs) are a special class of long non-coding RNAs (lncRNAs) that can control gene expression programs on multiple levels thereby contributing to cancer progression. However, their subtype-specific expression and function as well as molecular interactions in PDAC are not fully understood yet. In this study, we systematically investigated the expression of lincRNAs in pancreatic cancer and its molecular subtypes using publicly available data from large-scale studies. We identified 27 deregulated lincRNAs that showed a significant different expression pattern in PDAC subtypes suggesting context-dependent roles. We further analyzed these lincRNAs regarding their common expression patterns. Moreover, we inferred clues on their functions based on correlation analyses and predicted interactions with RNA-binding proteins, microRNAs, and mRNAs. In summary, we identified several PDAC-associated lincRNAs of prognostic relevance and potential context-dependent functions and molecular interactions. Hence, our study provides a valuable resource for future investigations to decipher the role of lincRNAs in pancreatic cancer. View Full-Text
Keywords: cancer; lincRNA; lncRNA; miRNA; pancreatic ductal adenocarcinoma; RBP cancer; lincRNA; lncRNA; miRNA; pancreatic ductal adenocarcinoma; RBP
►▼ Show Figures 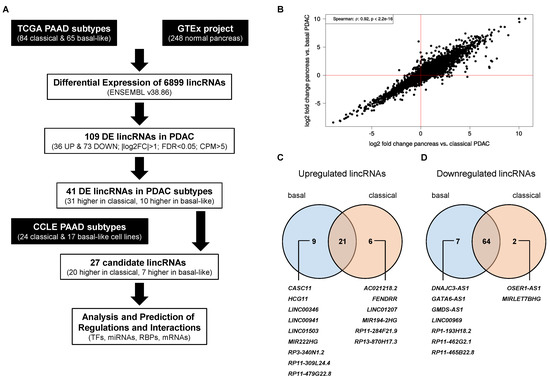