Metaplastic breast carcinoma (MBC) is a heterogeneous group of infrequent invasive carcinomas that display differentiation of the neoplastic epithelium towards squamous cells and/or mesenchymal-type elements. Most MBC have a triple negative phenotype and poor prognosis. Thus, MBC have worse survival rates than other invasive breast carcinomas, including other triple negative breast carcinomas (TNBC). In this study, we reviewed the molecular features of MBC, pointing out the differences among subtypes. The most frequently mutated genes in MBC were TP53 and PIK3CA. Additionally, mutations in the other genes of the PI3K/AKT pathway indicated its importance in the pathogenesis of MBC. Regarding copy number variations (CNVs), MYC was the most frequently amplified gene, and the most frequent gene loss affected the CDKN2A/CDKN2B locus. Furthermore, the pattern of mutations and CNVs of MBC differed from those reported in other TNBC. However, the molecular profile of MBC was not homogeneous among histological subtypes, being the alterations in the PI3K pathway most frequent in spindle cell carcinomas. Transcriptomic studies have demonstrated an epithelial to mesenchymal program activation and the enrichment of stemness genes in most MBC. In addition, current studies are attempting to define the immune microenvironment of these tumors. In conclusion, due to specific molecular features, MBC have a different clinical behavior from other types of TNBC, being more resistant to standard chemotherapy. For this reason, new therapeutic approaches based on tumor molecular characteristics are needed to treat MBC. View Full-Text
Keywords: MBC; metaplastic breast carcinoma; molecular alterations; prognosis; treatment MBC; metaplastic breast carcinoma; molecular alterations; prognosis; treatment
►▼ Show Figures 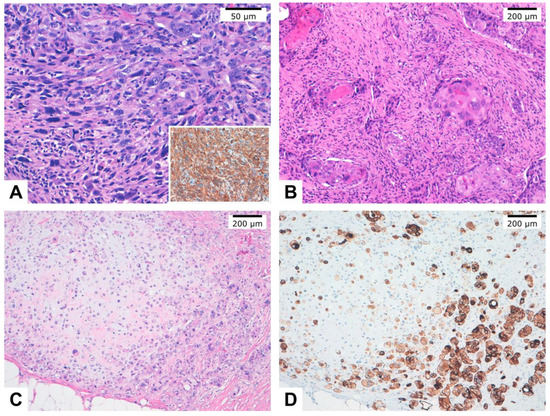