Prostate cancer is the second leading cause of cancer death in the Western world. While the overall 5-year survival of patients with primary prostate cancer reaches 98%, it drops to 30% when the cancer progresses to a metastatic disease (www.cancer.org; American Cancer Society). Prostate cancer cells depend on androgens for their growth, thus androgen-deprivation therapy has been the mainstay for treatment of non-metastatic and early metastatic prostate cancer. However, all patients invariably progress during the course of their disease since prostate cancer cells adapt to the androgen-deprived environment becoming “castration-resistant”, which is considered the advanced stage of the disease [1]. Several mechanisms are implicated in prostate cancer progression to advanced stage [1]. Among them, deletion of the tumor suppressor Phosphatase and Tensin Homolog (PTEN) is frequently observed during cancer progression [2]. Amplification of the androgen receptor (AR) gene is considered one of the main mechanisms driving transition to a castration-resistant phenotype [3,4,5]. Current treatment for advanced prostate cancer relies on taxane-based therapy and on new generation antiandrogen drugs (abiraterone, enzalutamide) able to inhibit the activity of the AR [6,7]. Besides the AR, estrogens and their receptors have also been implicated in prostate cancer initiation and progression but the translation into a potential therapeutic strategy still remains challenging [8].
BReast CAncer susceptibility gene 2 (BRCA2) is a tumor suppressor gene that when mutated confers increased sensitivity to several cancer types, including prostate carcinoma [9,10]. BRCA2 promotes repair of DNA double-strand breaks by homologous recombination (HR) [11]. We have previously reported that silencing of BRCA2 expression promotes resistance to anoikis, i.e., apoptosis induced by detachment of epithelial cells from the extracellular matrix [12], which is considered an important step in the metastatic cascade [13]. Notably, the mechanism involved in modulation of apoptosis by BRCA2 was found to be evolutionarily conserved in yeast and humans [12]. Prostate cancer patients with inherited BRCA2 mutations have a very aggressive disease, with higher grade, advanced stage at diagnosis and poor survival [14,15,16,17,18,19,20], making a priority the development of novel therapeutic strategies for these patients. In addition, metastases derived from castration-resistant prostate cancers, besides showing AR amplification, display also frequent somatic deletions of the BRCA2 gene [4]. Several clinical trials are currently evaluating the use of targeted therapies such as poly-(ADP-ribose) polymerase (PARP) inhibitors in BRCA-associated prostate cancer [6,7]. PARP is a DNA-binding protein that promotes repair of DNA single-strand breaks through the base excision and repair (BER) pathway. Suppression of the base excision and repair pathway by PARP inhibitors in BRCA2-deficient/HR-defective cancer cells has a synthetically lethal effect, because it generates an overwhelming genomic instability that fosters cancer cells to death [21], thus making PARP inhibitors promising candidates for the treatment of BRCA2-deficient castration-resistant prostate cancers. However, BRCA2-mutated cancers often become resistant to PARP inhibitors via different mechanisms, including recovery of BRCA2 functionality due to secondary BRCA2 mutations [22,23].
The thiopurine 6-thioguanine (6-TG) is a chemotherapeutic drug that induces DNA damage and is successfully used in the treatment of childhood acute lymphoblastic leukemia and other forms of leukemias [24]. Previous studies on its efficacy in various solid tumors have shown infrequent but positive results and have suggested that combinations of 6-TG with other agents may enhance the antitumor effects [25,26]. Recently, 6-TG was found to be a potent inhibitor of ubiquitin-specific protease 2, which plays a critical role in prostate tumor cell survival [27]. Limited data are available on the effect of this drug on solid tumors also due to the toxicity that 6-TG may have on normal cells, this limiting its protracted use in therapy. So far, the potential antitumor effect of 6-TG has never been tested in castration-resistant prostate cancer cells.
Yeast is a useful model organism for studying tumorigenic mechanisms [28] and for development of advanced technologies for drug discovery [29]. In particular, in BRCA2-expressing yeast cells, a high increase in both intra- and inter-recombination events occurs, and the expression of selected BRCA2 variants differentially affects yeast recombination [30], showing that BRCA2 function in homologous recombination-mediated DNA repair can be recapitulated in yeast. Thus, we first screened the effects of 6-TG and of its selected analogues on yeast cell growth and viability. We then investigated the effect of 6-TG alone and in combination with the taxane paclitaxel on normal immortalized and castration-resistant prostate cancer cells, and its dependence on BRCA2 expression. The effect of 6-TG treatment in BRCA2-knockdown prostate cancer cells before and after reconstitution of BRCA2 levels by ectopic expression was compared with treatment with olaparib, a Food and Drug Administration (FDA)-approved PARP inhibitor.

2.1. Effect of 6-TG and Its Analogues on Yeast Cell Growth and Viability

We first tested the effects on yeast cell growth of 6-TG and six of its analogues (Figure 1) in which either the thiol or the amino group is changed or lacking.
A range of different concentrations of 6-TG, from 10 µM to 1 mM, was added to growing yeast cultures and optical density was measured. As reported in Figure 2A, yeast cell growth was sensitive to 6-TG in a dose-dependent manner. Forty-eight h after treatment with 0.5 and 1 mM 6-TG, the growth inhibition was 63% and 83%, respectively. Drug concentrations of 0.125 mM and 0.25 mM inhibited cell growth by 27% and 35%, respectively.
Having established that 0.5 mM 6-TG partially but not completely inhibited yeast cell growth, we tested the effect of 6-TG analogues using this concentration. Yeast cell proliferation was not affected by 6-OMG, 2-N-6BP, 2-N-6CP and 7-MA (Figure 2B). 6-TG did inhibit cell growth by 35%. A significant growth reduction was observed in the presence of 6-N-7DP (62% inhibition with respect to control cells) and 2,6-DTP, the latter completely inhibiting cell proliferation (Figure 2B). Next, we tested cell viability by clonogenic assay after exposure to the drugs for 24 or 48 hours (Figure 2C). Only 2,6-DTP treatment resulted in decreased cell survival at 24 and 48 h (40% and 55% decrease). Overall, these results demonstrate that 6-TG, 6-N-7-DP and 2,6-DTP display an anti-proliferative effect in yeast, with 2,6-DTP significantly impairing cell viability.

To investigate the effect of 6-TG in prostate cells, we used the PNT1A normal immortalized prostate cell line and the C4-2 and DU145 castration-resistant prostate cancer cells. C4-2 cells are an androgen-independent derivative of the androgen-dependent LNCaP prostate cancer cells derived from the left supraclavicular lymph node metastasis, which retain the AR’s T877A mutation present in the parental cell line (https://cancer.sanger.ac.uk/cosmic) [31]. The T877A mutation affects steroid binding and response to antiandrogens [31]. DU145 are androgen-unresponsive prostate cancer cells derived from a central nervous system metastasis. DU145 and C4-2 retain AR expression [32,33], both express the estrogen receptor β but not α [34,35], both express a mutant p53 (https://cancer.sanger.ac.uk/cosmic), and are PTEN-positive the first and PTEN-null the second, thus allowing to assess to potential contribution of PTEN status in the response to 6-TG. 6-TG treatment, up to 25 µM, exhibited anti-proliferative effects in both PNT1A and C4-2 cells (Figure 3A). Notably, about 45% of PNT1A cells and 55% of C4-2 cells survived 48 h after treatment with 5 µM or higher concentrations of 6-TG. C4-2 but not PNT1A cells underwent apoptosis after 6-TG treatment in a dose-dependent manner, reaching 214% ± 19 apoptosis at 5 µM, and 305.5% ± 34.7 at 25 µM 48 h after treatment (Figure 3B). Treatment with 6-TG did not induce necrosis up to 72 h at any of the tested concentrations (Figure 3B).
6-TG at a maximum concentration of 5 µM was used in all the following experiments. At 5 µM, the anti-proliferative effect of 6-TG was time-dependent both in PNT1A and C4-2 cells, with the strongest inhibitory effect observed at 72 h in PNT1A cells (Figure 4A). A time-dependent pro-apoptotic effect of 6-TG was detected in C4-2 but not PNT1A cells (Figure 4B).

We have previously shown that BRCA2 downregulation promotes resistance to anoikis, a specialized apoptotic program initiated when epithelial cells detach from the extracellular matrix [12,36]. PNT1A normal prostate cells express higher BRCA2 levels than prostate cancer cells [37] (Figure 5A). To assess whether the apoptotic response to 6-TG treatment was affected by BRCA2 expression we transiently transfected PNT1A cells with BRCA2 siRNA (Figure 5B). Downregulation of BRCA2 expression did not affect PNT1A cell response either to 6-TG or to PTX or their combinations (Figure 5C).
BRCA2 knockdown by siRNA or shRNA in C4-2 and DU145 prostate cancer cells instead increased apoptosis induced by 6-TG or the PARP inhibitor olaparib but not by PTX (Figure 5D and Figure 6A,C and Supplementary Figure S1). Notably, downregulation of BRCA2 did not affect cell proliferation (Figure 5D and Figure 6A and Supplementary Figure S1). Transient overexpression of BRCA2 in prostate cancer cells resulted per se’ in decreased cell proliferation, increased apoptosis and resistance to 6-TG, PTX or a combination of them (Figure 5D and Supplementary Figure S1). Similarly, rescue of BRCA2 levels in BRCA2 shRNA-expressing prostate cancer cells resulted in resistance to 6-TG, PTX and olaparib (Figure 6A–C). Of note, the effect of 6-TG on prostate cancer cell proliferation and apoptosis was comparable to that observed after olaparib treatment and a combination of olaparib with 6-TG didn’t increase the apoptotic response observed after single drug administration. Intriguingly, 6-TG treatment, alone or in combination with PTX or olaparib, reduced AR protein levels, independently on BRCA2 expression (Figure 6C). Instead, olaparib treatment reduced AR protein levels only in BRCA2-knockdown prostate cancer cells, and the addition of 6-TG had a synergic effect in reducing AR levels (Figure 6C). Taken together, these results demonstrate that BRCA2 levels modulate the sensitivity of prostate cancer cells to 6-TG to a similar extent as olaparib and that 6-TG treatment decreases the expression of AR independently on BRCA2.

Cytotoxicity assays in yeast cells were performed by monitoring cell growth or cell viability in liquid cultures. In particular, the yeast growth curves in the presence of 6-TG were obtained by means of a Bioscreen C MBR instrument (Bioscreen, Carlo Erba Reagents S.r.l., Cornaredo-Milan, Italy). Each well of the Bioscreen 100-well Honeycomb plate was filled with 2.000 cells/150 μl of SC-Gal medium. The optical density was recorded at 600 nm every hour for 48 hours.
For the drug screening assay, an appropriate volume of the pre-culture was diluted in SC-Gal medium to obtain a final concentration of 1.6 × 104 cells/mL. The culture was incubated at 26 °C under shaking (150 rpm), in the presence of 500 µM 6-TG or its analogues. After 48 h, the culture’s optical density was measured at 600 nm. To assess cell viability in a clonogenic assay, yeast cells were plated on rich YPD medium (1% Yeast Extract, 2% Peptone, 2% Dextrose, 2% agar) before (time 0) and during drug treatment and the number of colony forming units (cfu) was determined. The logarithm of the number of cfu at the indicated time versus the number of cfu at time 0 (ln N/N0) is reported as a measure of cell viability.

Data are expressed as the mean ±SD. Comparisons to evaluate statistical significance among samples were performed using ANOVA test and Bonferroni or Tukey post hoc test, as specified in the text.

Taken together, our findings show that the FDA-approved 6-TG may represent a promising therapeutic drug for treatment of BRCA2-deficient castration-resistant prostate cancers. Our results provide also the first pre-clinical evidence that certain 6-TG analogues, namely 2-N-6-BP and 2,6-DTP, may be effective for treatment of BRCA2-proficient cancers.

We thank Paola Lavermicocca (ISPA-CNR) for the use of the Bioscreen instrument and Marisa Mirizzi (IBIOM-CNR) for kind assistance with manuscript preparation.

The authors declare that they have no conflicting financial interest. 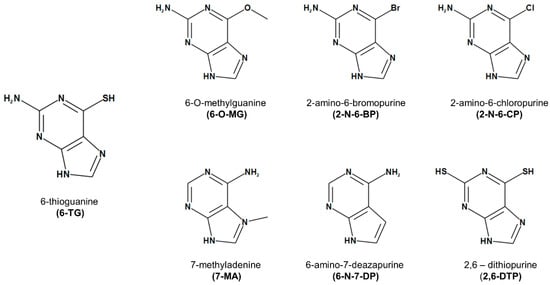 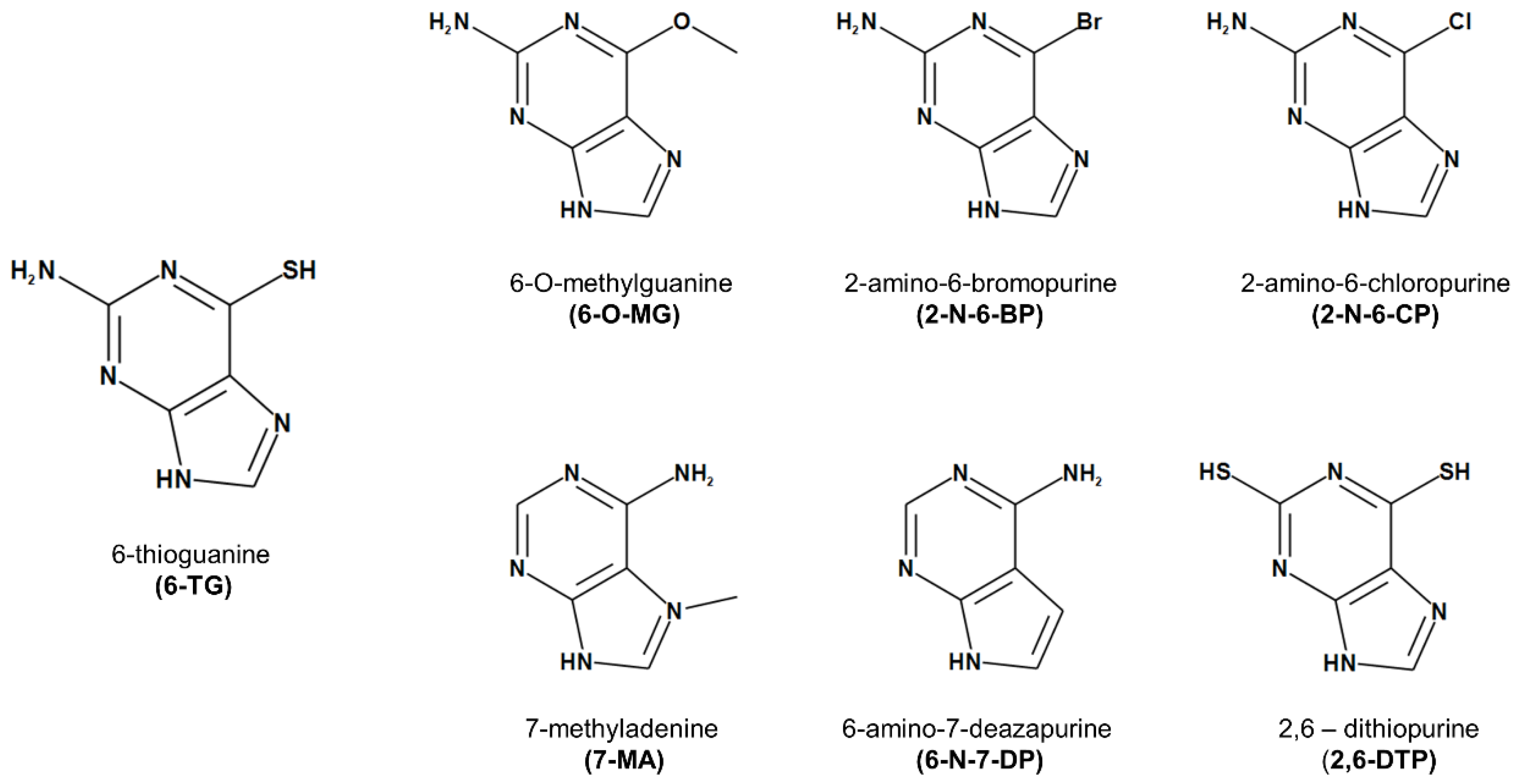 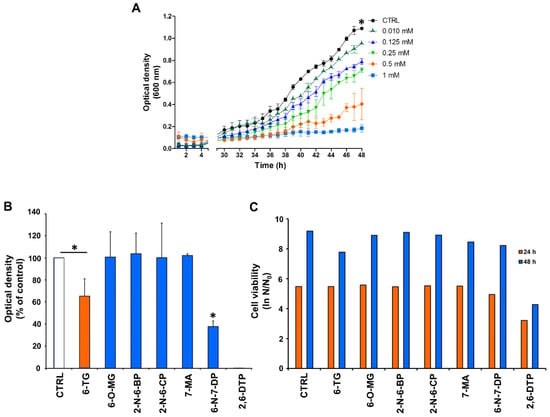 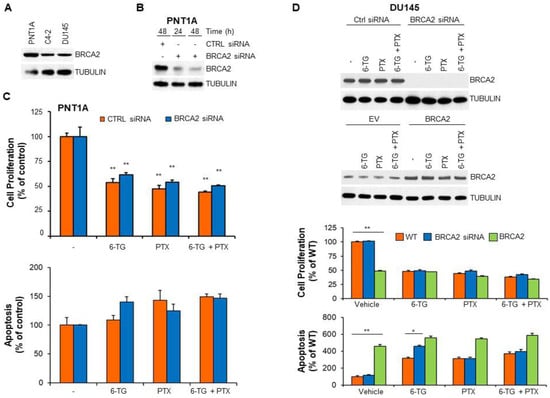 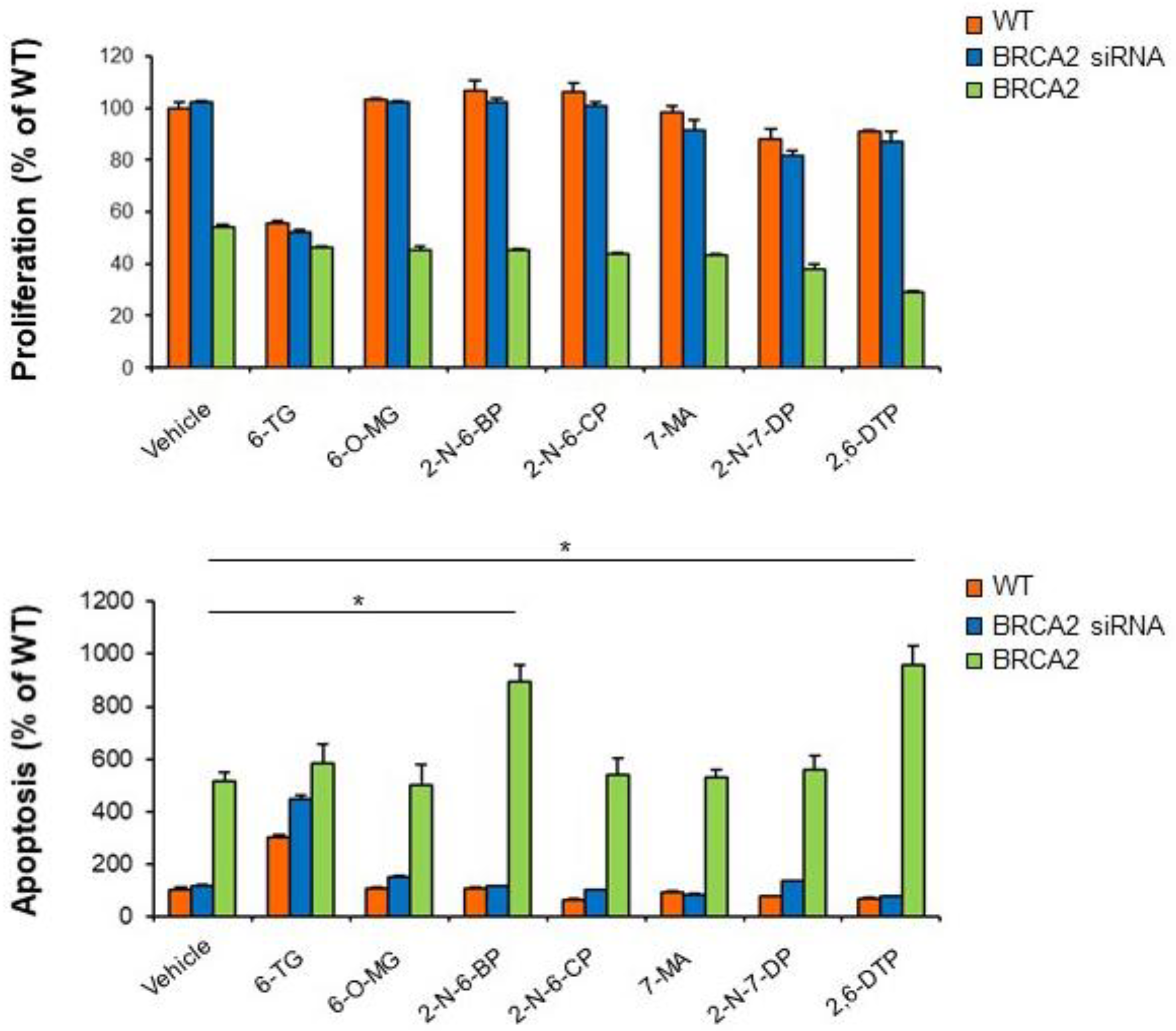