A Multiplexed Microfluidic Platform for Bone Marker Measurement: A Proof-of-Concept

Microorganisms, which utilize complex metabolic reactions made increasingly sophisticated by natural selection, have been powerful and useful chemical plants throughout human history. Due to the fast growth rate of microorganisms and the availability of inexpensive culture medium, their diverse metabolites have been used in various industries [1], including agriculture, food, wastewater treatment, pharmaceuticals, and biofuel. With the emergence of recombinant DNA technology, even eukaryotic biomolecules for therapeutics (e.g., insulin [2], human growth hormone [3]) and structural materials (e.g., spider silk [4], resilin [5]) have been produced in a microbial body.
To maximize the cost-effectiveness of white biotechnology, the methodology of microbial cultivation is critically important. Regarding mass-cultivation of microorganisms on an industrial scale, the cultivation systems are generally classified as closed or open [6]. The advantages of the closed cultivation system include good control of the cultivation condition and a reduced risk of contamination. However, the complex and expensive facility of the system increases the cost of the final product. On the other hand, an open cultivation system is cost-effective because it has fewer equipment requirements and can potentially be scaled up. Especially for the production of low-value commodities such as biofuels by photosynthetic microorganisms, cost is the most important dominant factor [7]. Therefore, an open cultivation system is the only choice for the cultivation of photosynthetic microorganisms [8].
For open cultivation systems, contamination from invading heterotrophs, pathogens, and grazers, as well as dust and sand, is the main restriction for commercial viability since the contaminants greatly reduce the growth rate of the target microorganisms [9]. Thus, many researchers have proposed open cultivation methods to overcome the problem of animate and inanimate contamination. One approach is to use chemical additives such as quinine sulfate [10,11], rotenone [12], and ammonium hydroxide [13]. Yet this method decreases the cell growth rate. Another approach is to use selective environments, such as high salinity or alkalinity [14]. However, this approach constrains the usable species (e.g., Dunaliella salina or Spirulina). The other solution to avoid the risk of contamination is to control the process for the desired culture condition, such as a temporary reduction in pH, thereby enabling a fast growth rate of the target microbes [15]. Although this strategy is applicable to various species, the additional costs necessary to install and operate a system for controlling the environment are prohibitive.
We previously introduced a concept for a new cultivation technique using hollow hydrogel microfibers to cultivate microorganisms in open cultivation systems [16]. In the present study, we conduct detailed analyses of the method, including enhancement of the mechanical toughness utilizing a double-network hydrogel. Figure 1 shows a conceptual schematic of the method; hollow hydrogel microfibers encapsulating the target microorganisms, which are produced using a three-dimensional co-axial microfluidic device, are immersed into open environments such as lakes and ponds. The pore size of the hydrogel fiber membrane allows nutrients, gases, and waste to pass through while preventing invading heterotrophs and viruses from entering the fiber [17]. This simple approach significantly reduces costs by using alginate, which is an earth-abundant biopolymer, and employing a microfluidic fabrication process, which is easy for scale-up and automation. In this study, we demonstrate cultivation of Corynebacterium glutamicum as the target microbe encapsulated in the microfiber for the proof of concept. First, the hollow hydrogel microfiber is formed by using a co-flowing microfluidic device. Second, growth rates of C. glutamicum with and without the hydrogel fiber are compared, employing Vibrio alginolyticus as an invading heterotroph. Third, the effect of the fiber wall thickness on the microbial growth rate is evaluated for characterization of the system. Finally, the applicability of the double-network hydrogel to increase the durability of the microfiber is assessed.

Figure 2 shows the co-flowing microfluidic device comprising a plastic connector (VTF 106, AS ONE, Osaka, Japan) with an inner diameter of 1.3 mm and a hollow glass needle. The design of the device is similar to designs reported elsewhere [18,19,20]. The glass needle was formed by pulling a hollow glass tube (Hirschmann Laboratory, Eberstadt, Germany) with an inner diameter of 0.47 mm and an outer diameter of 1.2 mm to have a sharp edge at the tip using a Puller PC-10 (Narishige Group, Tokyo, Japan). A coaxial laminar flow was formed by introducing a bacterial suspension from the inlet of the glass needle and sodium alginate solution (1.5% w/v) from the other inlet. The sodium alginate solidifies at the outlet when it encounters Ca2+ ions in a 150 mM calcium chloride solution. Thus, a hollow hydrogel microfiber encapsulating bacteria was obtained. The diameter of the microfiber can be controlled by changing the flow rates of the inner and outer flow. Syringe pumps (AS ONE) were used in the present study to control the flow rates.

2.3. Culture of Bacteria in Hollow Microfiber

3.1. Culture of Bacteria in Hollow Microfiber

This work was supported by Japan Society for the Promotion of Science.

K.H., H.O. and N.M. conceived the design of the design of the study. K.H., M.O. and K.F. fabricated microfibers. K.H. and M.O. designed all the experiments. M.O. performed the cultivation of C. glutamicum in bulk culture medium and the microfiber. M.O. performed the cultivation of C. glutamicum and V. alginolyticus. M.O. examined the effect of membrane thickness on the bacterial activity. M.O. and K.F. conducted the experiments of double-network hydrogel. H.O. provided considerable advice on the fabrication of hollow microfibers. K. H. wrote the paper. All authors discussed the results and commented on the manuscript. 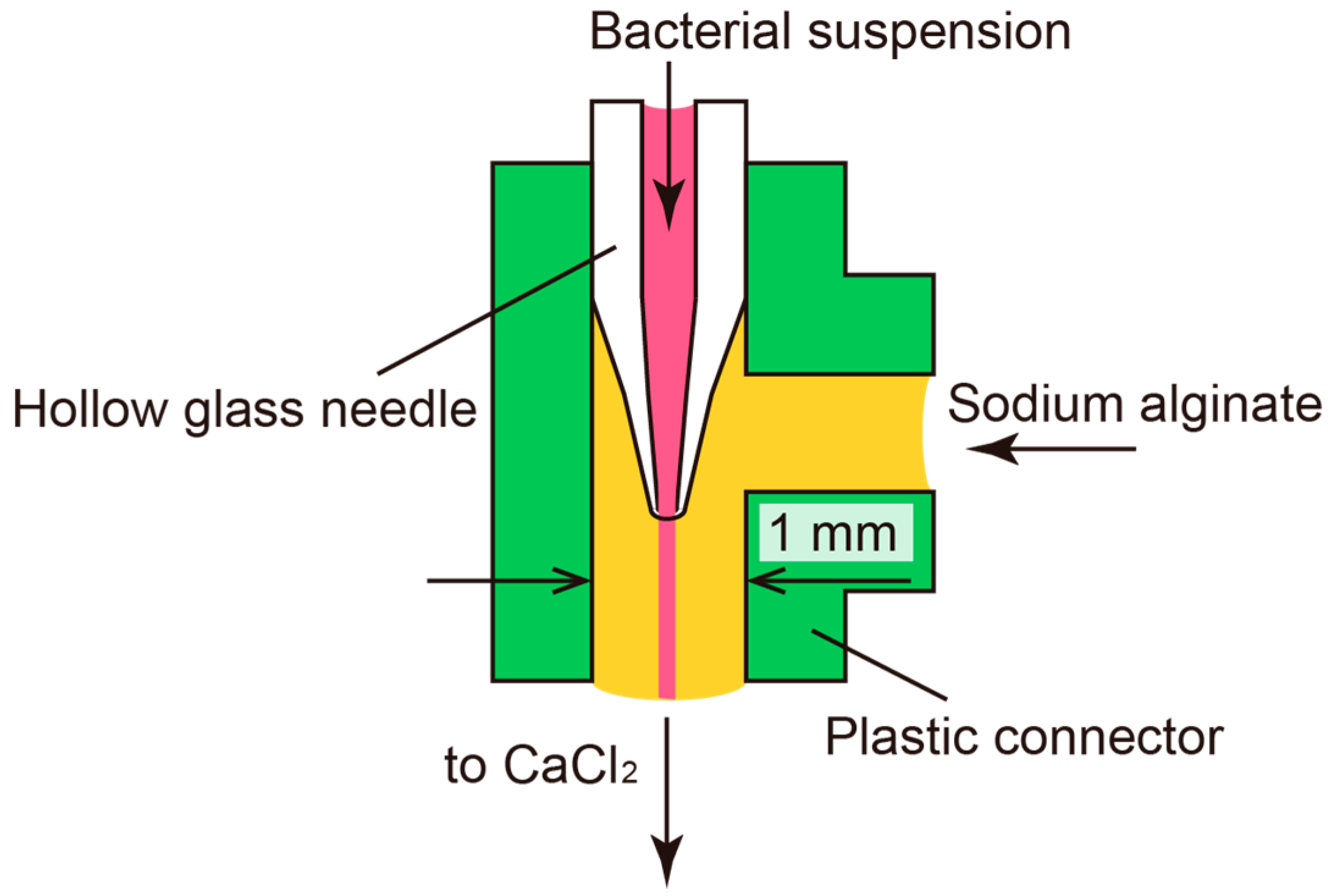 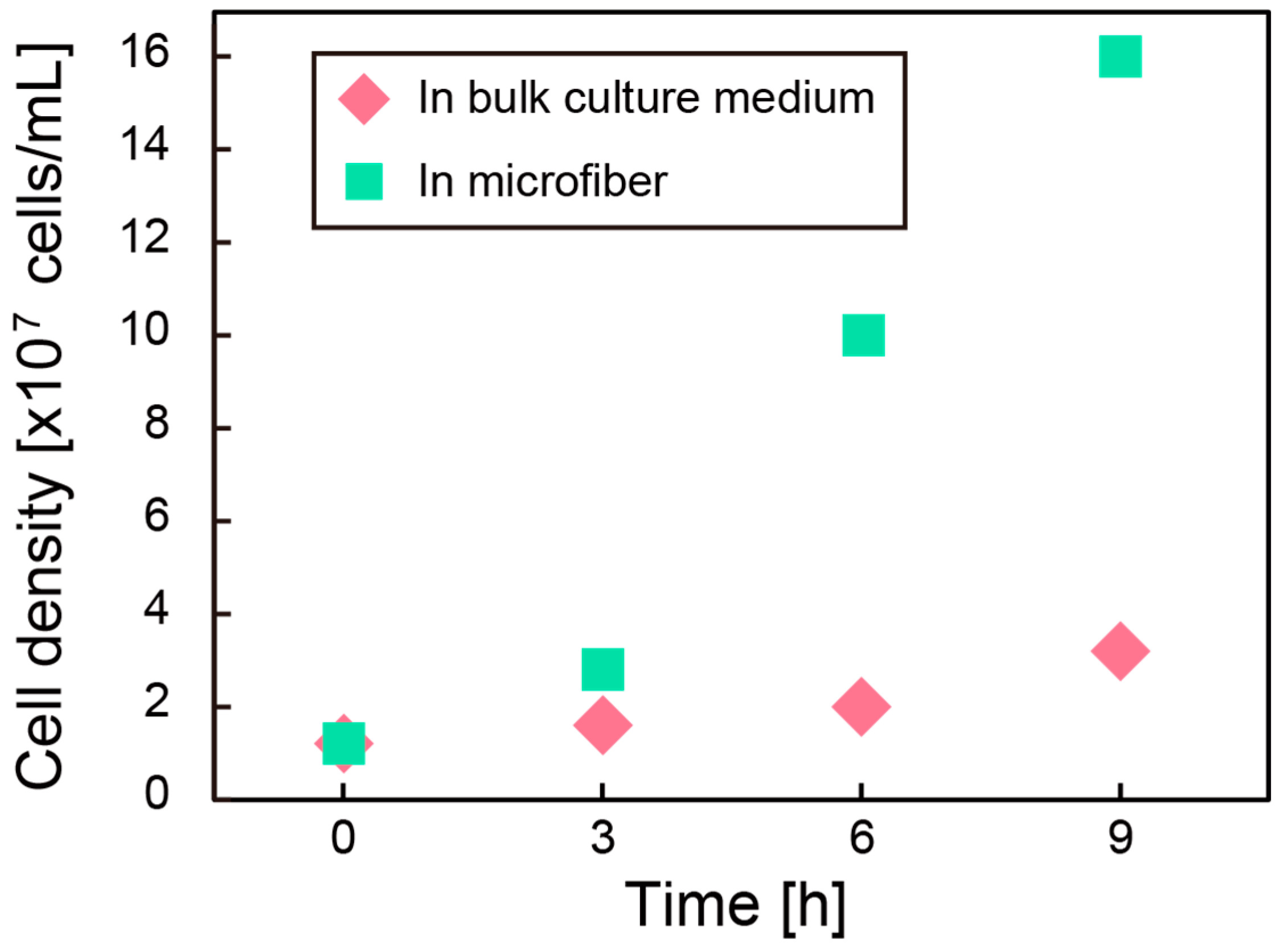