:
In this paper, a systematic study of a fully developed electroosmotic flow of power-law fluids in a rectangular microchannel bounded by walls with different zeta potentials is described. Because the upper and lower layers of most microchannels are made of different materials, it is necessary to study the flow characteristics for cases in which the microchannels have different zeta potentials at each wall. The electrical potential and momentum equations were solved numerically using a finite element analysis. The velocity profiles and flow rates were studied parametrically by varying the fluid behavior index, channel aspect ratio, and electrochemical properties of the liquid and the bounding walls. The calculated volumetric flow rates in a rectangular microchannel were compared with those between two infinite parallel plates.
Keywords:
electroosmosis; power-law fluid; zeta potential; microchannel

Electroosmotic flow (EOF) is one of the most important techniques in a microfluidic system because conventional pressure-driven flows are inefficient owing to a high surface-to-volume ratio at the microscale. The mechanism and underlying physics of an EOF are now considered rather classical materials, as described in many different textbooks [1,2,3,4]. Most studies on EOFs have assumed that the medium in the microchannel is a Newtonian fluid, which is a rational consideration because most electrolytes or buffer solutions used in microfluidic devices are Newtonian. However, biological fluids such as blood, saliva, and DNA solutions, which are frequently used in microfluidic devices such as biochips, are non-Newtonian in nature. Because non-Newtonian fluids show different flow behaviors than Newtonian fluids, it is suitable for a non-Newtonian model to predict the appropriate EOF [5,6,7,8,9,10,11,12].
Among the various models for non-Newtonian fluids, the power-law model has been the most chosen rheological model for EOFs occurring in a microchannel, owing to its simplicity and adequateness in terms of the flow behavior [13,14]. Using the power law, Das and Chakraborty analyzed the EOF behavior of blood samples as functions of the blood concentration [7]. Zhao et al. analyzed the behavior of an EOF in a slit channel using the power-law, and solved the analytical expressions for the shear stress, dynamic viscosity, and velocity distribution [15]. In addition, they obtained a general Smoluchowski slip velocity using the Carreau model [16]. Bharti et al. investigated the electroviscous effects in a steady, fully developed flow of a power-law fluid through a cylindrical microchannel using the finite difference method [13]. Tang et al. numerically studied a non-Newtonian power-law fluid in a microchannel when applying the lattice Boltzmann methodology [17]. Berli reported the theoretical expressions of the flow rate and output pressure of the electrokinetic pumping of non-Newtonian fluids through cylindrical and slit microchannels [18]. Vasu and De solved the EOF behavior of power-law fluids in a slit microchannel at a high zeta potential without applying a linear Debye-Hückel approximation [19]. Babaie et al. reported the EOF of a power-law fluid in a slit microchannel by combining the pressure gradient in the channel [20]. Ng and Qi presented an analytical model for the EOF of a power-law fluid through a slit channel while gradually varying the channel height and wall potential [14]. In addition, some efforts have focused on viscoelastic fluids in two-dimensional microchannels under the combined influence of electroosmotic and pressure gradient forces. Afonso et al. investigated the steady-state slip flow with symmetric or asymmetric zeta potentials at the walls [21]. Wang et al. investigated the unsteady slip flow with asymmetric zeta potentials at the walls [22].
In most lab-on-a-chip systems, the cross-sections of the microchannels, made using modern micromachining technology, are close to a rectangular shape [23,24]. However, in studies on the EOF of a non-Newtonian fluid, there has been very little research on the flow inside a rectangular channel as compared to research on circular and parallel plate microchannels. Park and Lee obtained the volumetric flow rate using the Helmholtz-Smoluchowski velocity for viscoelastic fluids while applying the Phan-Thien Tannar model with and without a pressure gradient [12]. Vakili et al. reported a hydrodynamically fully developed EOF of a power-law fluid in a rectangular channel with a changing aspect ratio using a numerical solution through a finite difference procedure [24]. Zhao et al. studied the transient EOF of power-law fluids in a rectangular microchannel driven by three modes of an electric field, i.e., a direct current (DC) electric field, an alternating current (AC) electric field, and a combined AC and DC electric field using a finite element method [25]. The above studies are based on a symmetric rectangular channel structure, assuming identical zeta potentials of the walls encompassing the microchannel. However, there are many cases that call for using different materials to fabricate a useful microchannel. A common example is a microchannel made with a polydimethylsiloxane (PDMS) top and a silicon dioxide (glass) bottom [26]. Datta et al. obtained analytical solutions in the form of a Fourier series for EOF in a rectangular channel with variable wall zeta-potential for Newtonian fluids [27], however, EOF in a rectangular channel with asymmetric zeta potential for non-Newtonian fluids has not yet been reported.
In the present study, we generalize previous studies on power-law fluids and introduce bounding walls with different zeta potentials and different aspect ratios of the rectangular channel. Herein, we report the characteristics of an EOF by comparing and looking into the velocity profiles and volumetric flow rates in rectangular channels and between infinite parallel plates.

We consider a fully developed steady-state electroosmotic flow, as shown in Figure 1, where a constant direct current (DC) of electric field is applied to a non-Newtonian fluid with a constant density and electric permittivity confined to a rectangular channel, where and indicate the width and height, respectively. Each boundary bears an electric charge upon contact with a fluid. We assume that the top and side walls are quantified based on zeta potential , and that the bottom wall is quantified based on zeta potential . Thin nano-scale regions with excess ions, called an electrical double layer (EDL), are formed adjacent to each boundary, as indicated by the hatched area in the figure, and are labeled as exaggerated EDL for clarity. The flow is caused by the electrostatic reaction between an external electric field and an excessive amount of ions in the EDLs, which will drag the entire fluid through viscous dissipation.
We describe this EOF theoretically based on a system of equations nondimensionalized using , , , and as the characteristic length, electric potential, velocity, and time, respectively, where and are the conventional Smoluchowski velocity and dynamic viscosity of Newtonian fluids, and the superscript tilde denotes dimensional form. The velocity field of a fluid in a rectangular channel is governed by the dimensionless continuity and Cauchy momentum equations, which are given as follows: where is the velocity vector, is the pressure, is the stress tensor, and is the body force. The dimensionless stress tensor can be expressed based on the strain rate tensor, , as: where and is the effective viscosity. The effective viscosity for the power law fluid is given by: where is the flow consistency index, which is nondimensionalized using , and is the flow behavior index. We consider the unidirectional flow that can be represented as , where is the x-component of velocity and is the unit vector along the x-direction. For the EOF, the only driving force is generated through the interaction between the external electric field and the charge density in the EDL region. A dimensionless body force in Equation (2) can be obtained by introducing dimensionless zeta potential based on the top and side walls to the Cauchy momentum equation, which gives us : the details of the dimensionless form are described in Appendix A. The total electric potential can be represented as , where and are the electric potential owing to an external electric field and the zeta potentials, respectively. If we limit the present analysis to microchannels where the Debye length is much smaller than the height of the channel, the electric potential owing to the zeta potential can be described through the Poisson-Boltzmann equation, which can be linearized using a Debye-Hückel approximation as: where is the nondimensional Debye length. Here, the Debye length , a measure of the EDL thickness, is expressed as for an aqueous solution of a symmetrical electrolyte, where is a Boltzmann constant, is the absolute temperature, is the elementary charge density, is the charge number of ions, is the Avogadro’s number, and is the mole concentration (mol/m3).
In the present analysis, both EDL potential field and electroosmotic flow field are solved in the partial differential equation (PDE) module of finite element numerical analysis package COMSOL Multiphysics 5.1. In our work, a PDE governing the EDL potential (Equation (5)) and a PDE governing electroosmotic flow field (Equation (2)) are both constructed from the general form of PDE in COMSOL, which is based on the numerical method used in the work by Zhao et al. [15]. Through the body force term , these two PDEs are coupled together. A no-slip condition was applied to each wall, and a symmetric condition was applied to the symmetric surface, as shown in Figure 1.
The parameters used in this study are the zeta potential ratio , ranging from −1 to 2; the fluid behavior index , ranging from 0.8 to 1.2; the channel aspect ratio , ranging from 0.5 to 5; and the dimensionless Debye length , ranging from 0.005 to 0.01.

We studied electroosmotic flows of non-Newtonian fluids with an asymmetric boundary in a rectangular microchannel by applying the power-law method. Zeta potentials on the top and bottom boundaries are allowed to assume mutually different values, and thus they can be made up of different materials. Based on numerical simulations, the fluid flow and electric potential distribution, coupled through the hydrodynamic and Maxwell stress contributions, were analyzed based on the conservation laws, including the momentum and linearized Poisson-Boltzmann equation.
Flow enhancement of a power-law fluid was characterized in terms of the ratio of zeta potential, behavior index, aspect ratio of the channel, and Debye length. The velocity profiles of the power-law fluids show a more enhanced flow as the behavior index decreases, corresponding to the shear-thinning hydrodynamic features. In addition, it is apparent that an increase in the flow rate gives rise to a higher and lower when the zeta potential of the bottom is substantial . Power-law fluids in the presence of side walls consistently have flow rates beyond the EOF generated between infinite parallel plates when the zeta potential at the top is substantial . As the Debye length increases, the flow rates of the power-law fluids decrease almost linearly. It can be concluded from the results that, depending on the Debye length and difference in zeta potential, the flow rate in a rectangular microchannel may be greater or less than the flow rate between two parallel infinite plates under identical conditions. This work can help in understanding the hydrodynamics of rheological fluids, such as biological fluids including blood, saliva, and DNA solutions, in a typical channel employed in a lab-on-a-chip system.

This work was supported by the Korea National University of Transportation in 2014.

The Cauchy momentum equation can be non-dimensionalized in the following ways: where the superscript tilde denotes dimensional form. 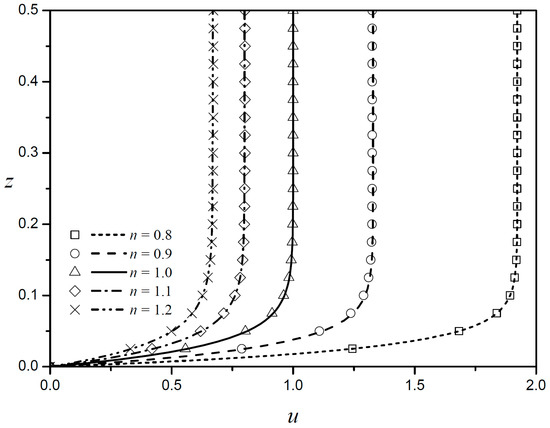 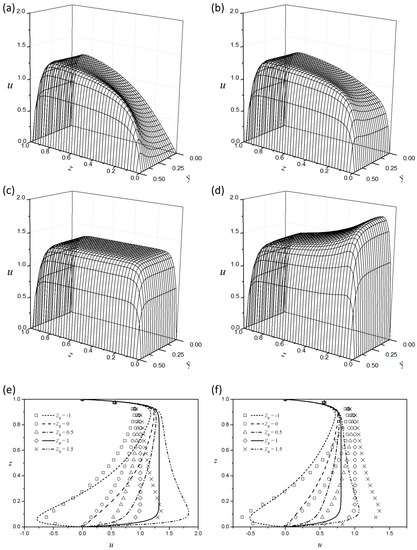 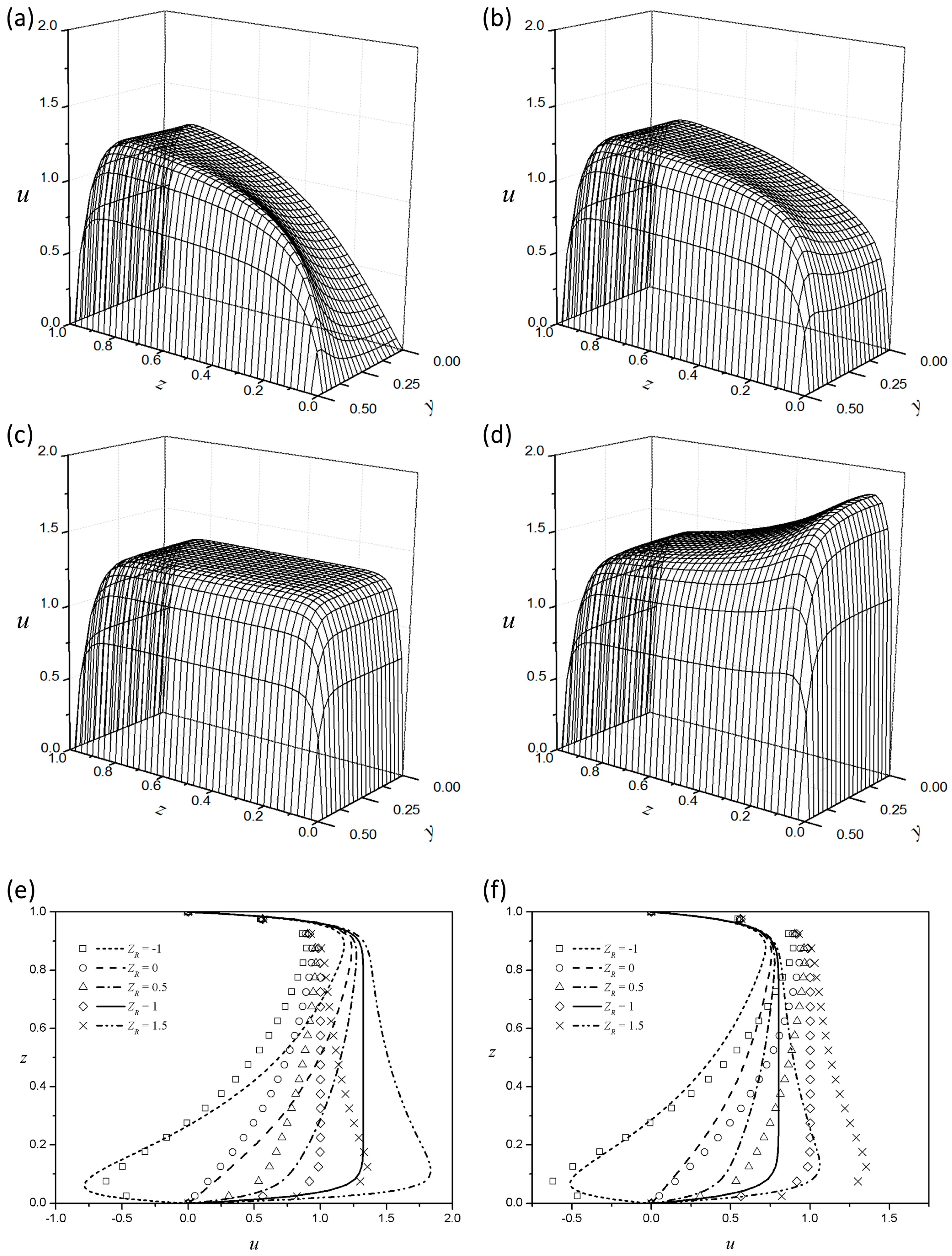 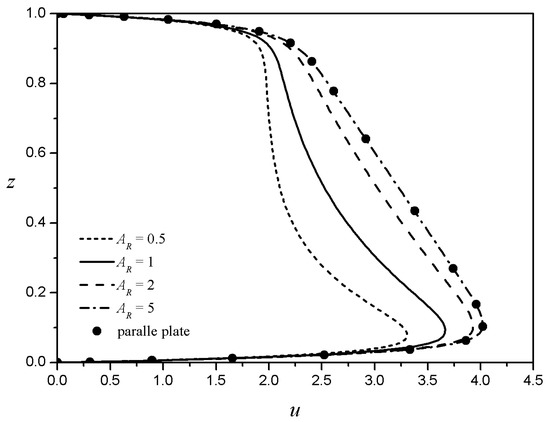 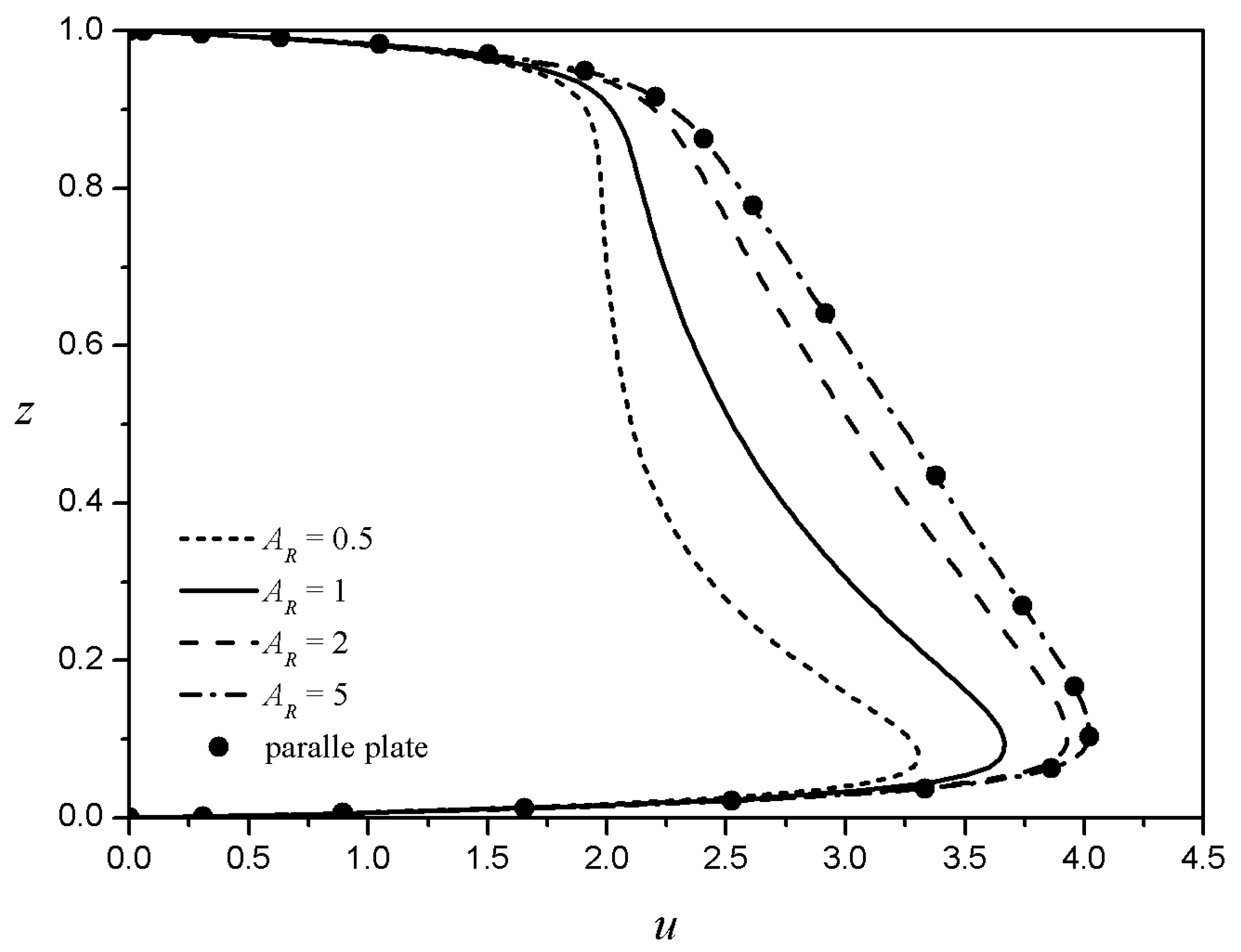 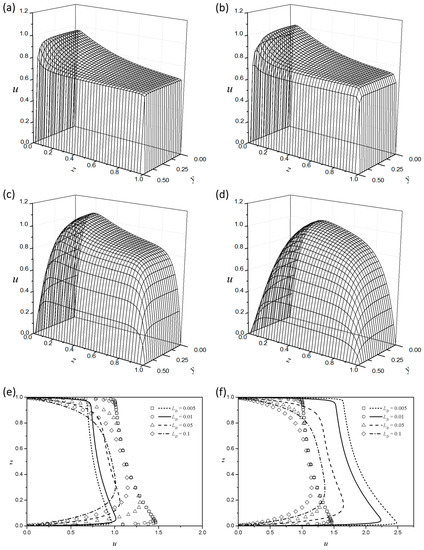 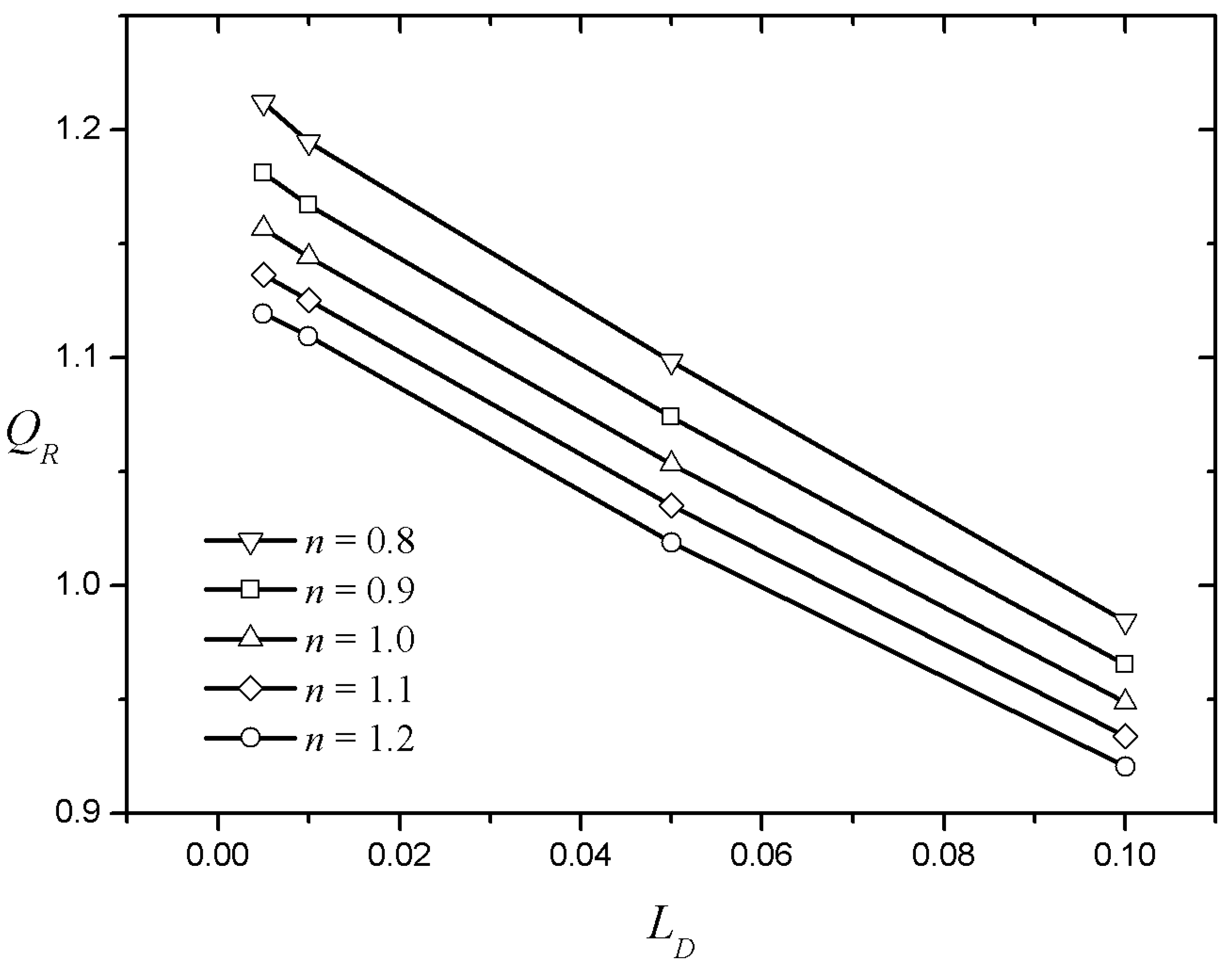