Opportunities and Challenges in Flexible and Stretchable Electronics: A Panel Discussion at ISFSE2016

:
Selective laser sintering enables the facile production of metal nanoparticle-based conductive layers on flexible substrates, but its application towards large-area electronics has remained questionable due to the limited throughput of the laser process that originates from the direct writing nature. In this study, modified optical schemes are introduced for the fabrication of (1) a densely patterned conductive layer and (2) a thin-film conductive layer without any patterns. In detail, a focusing lens is substituted by a micro lens array or a cylindrical lens to generate multiple beamlets or an extended focal line. The modified optical settings are found to be advantageous for the creation of repetitive conducting patterns or areal sintering of the silver nanoparticle ink layer. It is further confirmed that these optical schemes are equally compatible with plastic substrates for its application towards large-area flexible electronics.
Keywords:
laser sintering; metal nanoparticle; micro lens array; cylindrical lens; flexible electrode

A metal electrode layer, either patterned or in a thin-film form, is an inevitable component of an electronic device. Fabrication of a metal electrode layer based on conventional photolithographic means with vacuum evaporation techniques has achieved tremendous success with silicon-based electronics thus far, however, it has often been found to be improper for flexible and stretchable electronics. New types of conductive layers based on metal nanoparticle (NP) ink have provided a possible solution to this problem. As the melting temperature of metal NPs decreases according to its diameter due to the size effect, [1,2] a metal electrode layer is easily created on an arbitrary substrate at a mild temperature in ambient conditions through the direct coating and sintering of metal NP ink. However, despite its advantages, the minimum feature size of the resultant electrode prepared by metal NPs was relatively coarse due to the limited resolution of the conventional printing techniques which were employed for the selective deposition of metal NP ink [3]. At the same time, the sintering scheme remained questionable for a number of heat-sensitive substrates, as it was experimentally verified that the conventional sintering step with substantial sintering time can damage the underlying substrate [4].
As an alternative to the conventional sintering scheme, selective laser sintering of metal NPs was introduced to conduct patterning and sintering of metal NP ink simultaneously using a focused laser beam [5,6]. The focused laser beam is employed as a localized heat source based on the photothermal reaction, [7] and the area subject to heating is mainly determined by the spatial intensity distribution of the focused laser beam. Yeo et al. [8] demonstrated that the feature size of the resultant electrode can be easily reduced down to several micrometers using a laser beam focused by a telecentric lens module, which is difficult to achieve with other printing techniques. In addition, it was confirmed that the thermal damage on the underlying substrate can be minimized owing to the reduced heat-affected zone generated by a focused laser. These results suggest that laser sintering can be a convenient technique for the creation of metal patterns on flexible substrates. At the early stage, noble metal NPs such as gold (Au) [5,6,9,10,11,12,13,14,15] and silver (Ag) NP ink [1,2,4,8,16,17,18,19,20,21,22,23] were employed as the target materials for laser sintering, but recent studies demonstrate that the application of laser sintering can be extended to other oxidation-sensitive metal NPs such as copper (Cu) [24,25,26], even in ambient conditions, by reducing the local heating time through rapid scanning of the focused laser beam.
Laser sintering, however, is often considered to be inappropriate for mass production since it is a direct writing method in principle. As the electrode pattern becomes denser, the time required for the scanning increases linearly. At the same time, a thin-film electrode is another form of electrode that is difficult to be manufactured by the laser sintering method. Laser sintered thin-film electrodes not only require raster scanning of the entire area, but also often show imperfect electrical conductivity due to the discontinuities in electrical path originated from separate scanning steps. In this study, we introduce extended laser sintering schemes with a spatially modified focused beam to assist in the facile production of the electrodes with denser patterns or thin-film metal layers. In detail, a focusing lens is substituted by a micro lens array (MLA) and a cylindrical lens, designated for the fabrication of densely patterned electrodes and thin-film metal layers, respectively. It is also confirmed that the proposed optical schemes are still compatible with plastic substrates for their application in large-area flexible electronics.

Ag NP ink is firstly synthesized with the two-phase method, as reported in previous studies [8,17]. The resultant Ag NP is ~5 nm in diameter and encapsulated with self-assembled monolayer (SAM) to prevent agglomeration between NPs. It is confirmed that the Ag NP ink experiences melting when the temperature reaches ~150 °C, which is significantly lower than its bulk counterpart, due to the melting point depression from the size effect [2]. The synthesized Ag NP ink is coated on arbitrary substrates by spin-coating at 1000 rpm, and dried in a convection oven at 70 °C for 3 min to evaporate the excessive solvent. The target substrate can be either a rigid substrate such as a silicon wafer or a slide glass, or a flexible substrate. Polyimide (PI) thin film with a thickness of 150 μm is selected as the flexible substrate throughout the study.
A thin-film composed of Ag NPs is prepared on the substrate after the coating and drying steps, as shown in Figure 1a. Although Ag NPs are closely packed together, the as-prepared NP ink layer does not exhibit good electrical conductivity since the Ag NPs exist as separate entities. These Ag NPs can be transformed into a continuous conductive layer once a focused laser beam is scanned along the designated path, as shown in Figure 1b. The local temperature of the area subject to the laser irradiation increases rapidly and the Ag NPs experience melting and solidification steps as a consequence. The Ag NPs after the laser scanning subsequently show different physical properties from the as-deposited area, such as reflective color and high electrical conductivity.
An optical system is required to focus the laser beam on a designated spot, and an objective lens is frequently employed for the focusing, as shown in Figure 2a. The scanning path is controlled by a programmable motorized stage. Instead of moving the stage, a galvano-mirror together with a telecentric lens can be employed to achieve fast scanning of the laser beam over a large area [8,17]. Together with single focusing scheme, an MLA and cylindrical lens have been exploited in this study as new optical schemes for large-area compatible laser sintering, as depicted in Figure 2b,c. For single focusing, a green wavelength continuous wave laser (Millenia V, Spectra-Physics, Santa Clara, CA, USA) is scanned by a 2D galvano-mirror scanning system (hurrySCAN II, Scanlab GmbH, Puchheim, Germany) while the laser is focused by an f-theta telecentric lens with f = 100 mm. The laser scanner system is controlled by a computer with CAD software (SAMLight, SCAPS GmbH, Oberhaching, Germany) to draw arbitrary patterns. For the generation of multiple beamlets, an MLA with 400–900 nm anti-reflective coating is employed together with a 5× objective lens. More detailed information on the optical system is included in the Results and Discussions section. The MLA has a pitch of 300 µm and a focal length of 18.6 mm. For a focal line, the MLA is replaced by a plano-convex cylindrical lens with f = 50 mm. The laser scanning speed is fixed at 5 mm/s in every case. 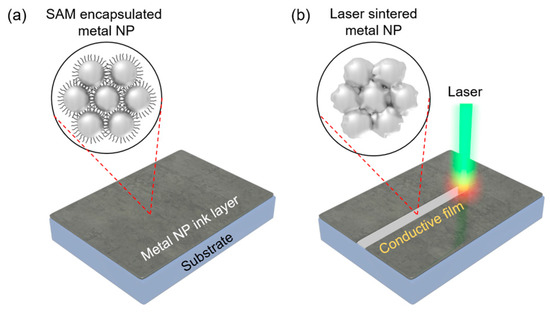 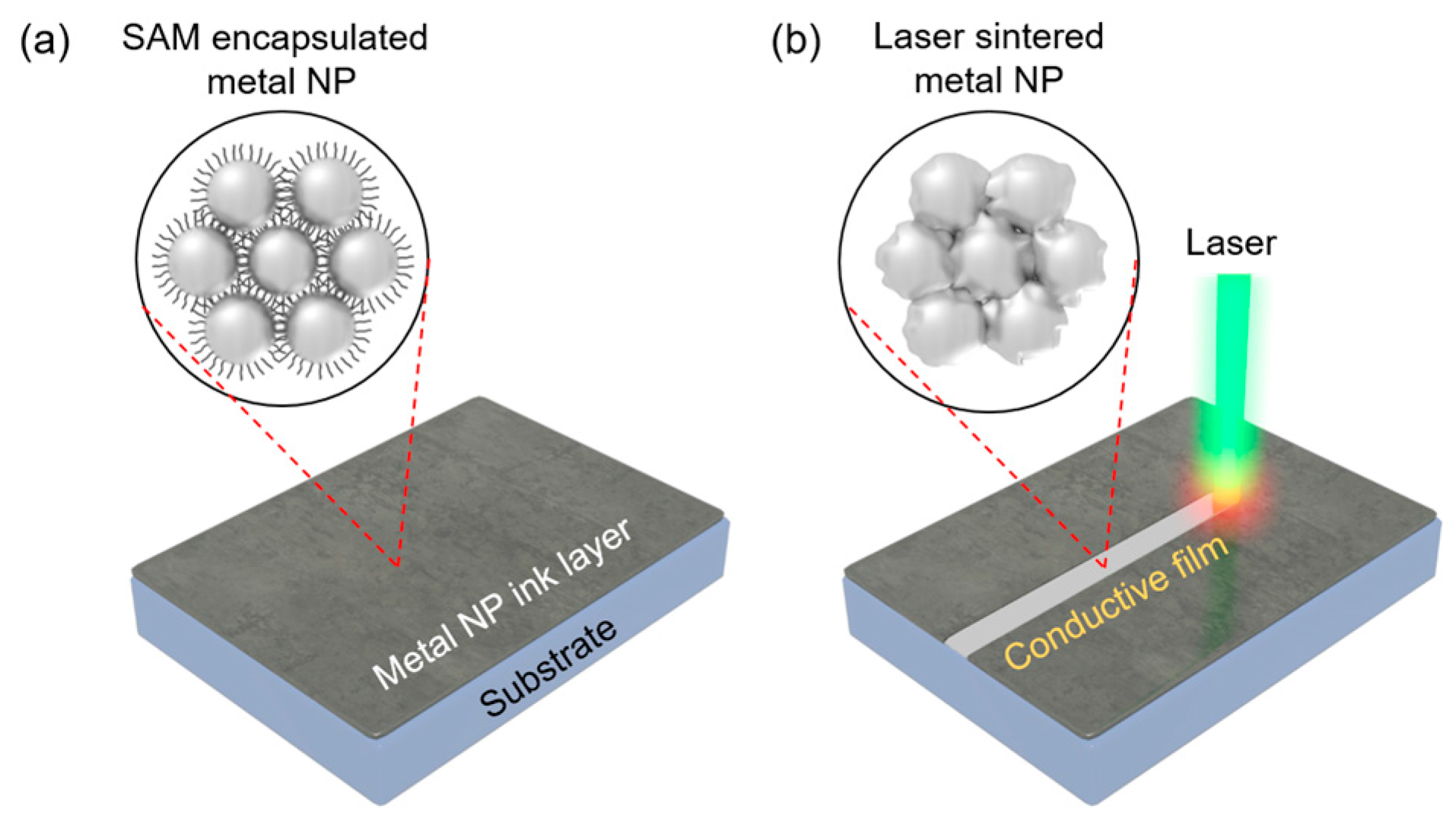 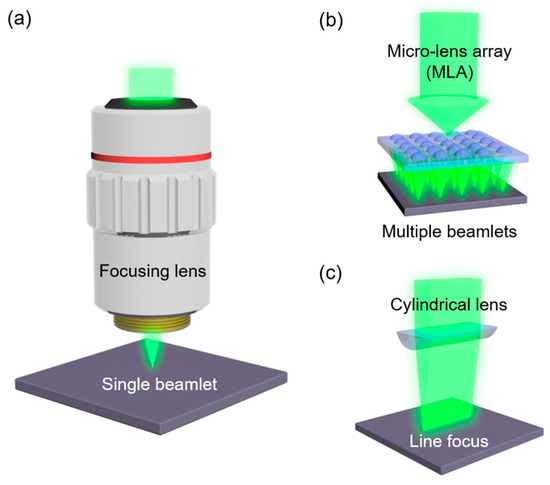 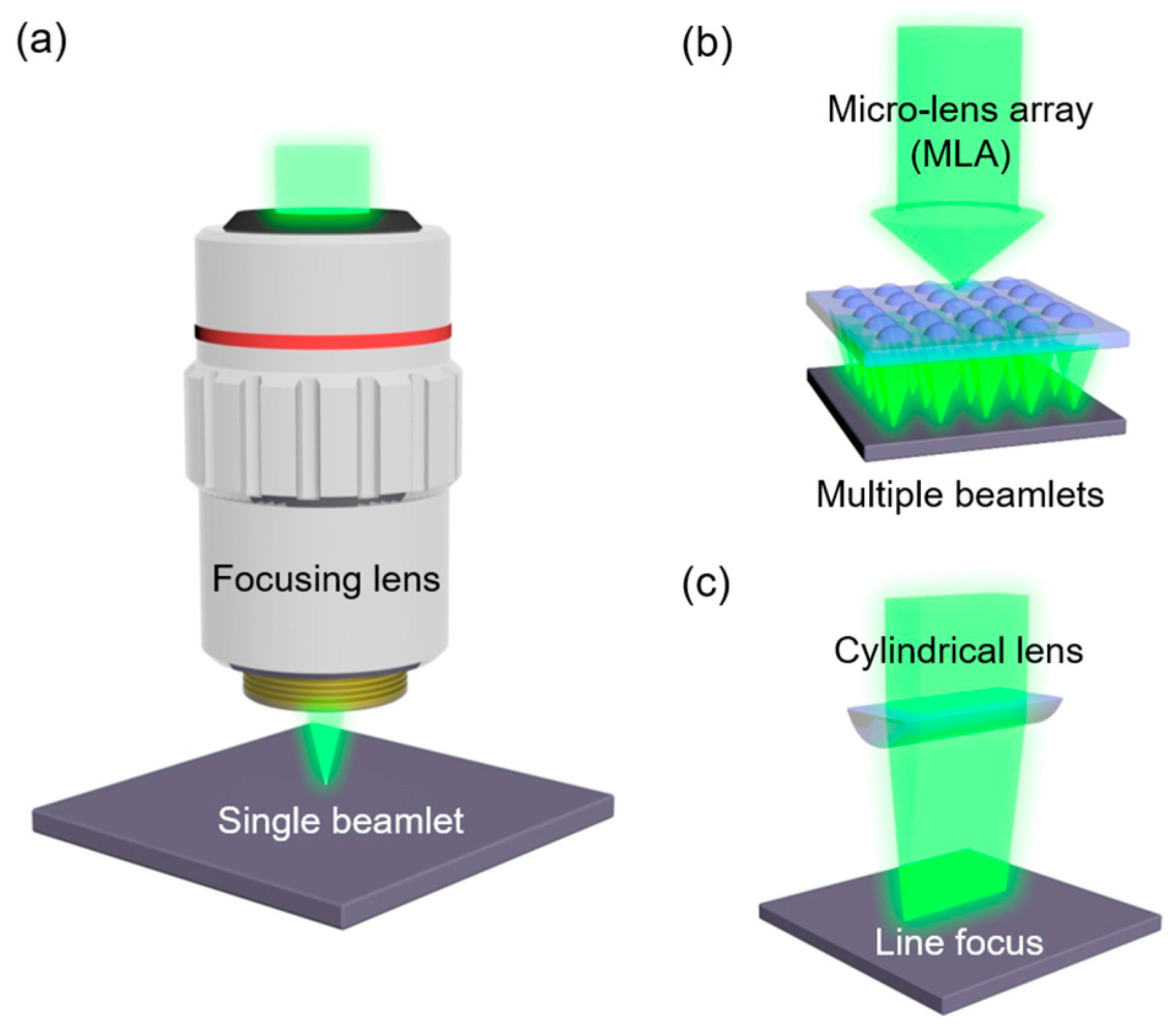 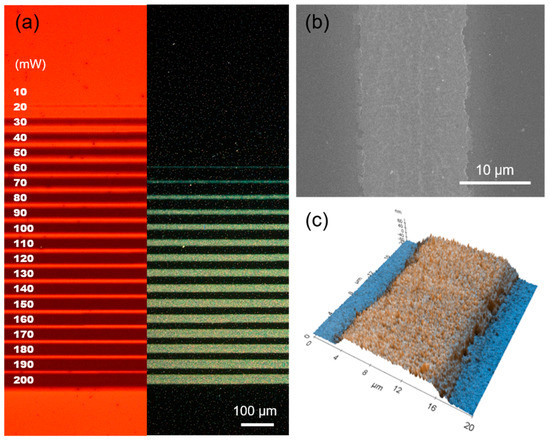 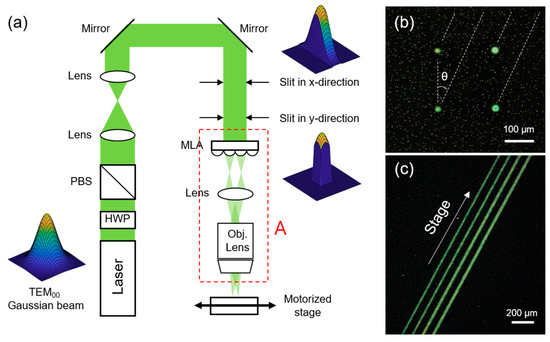 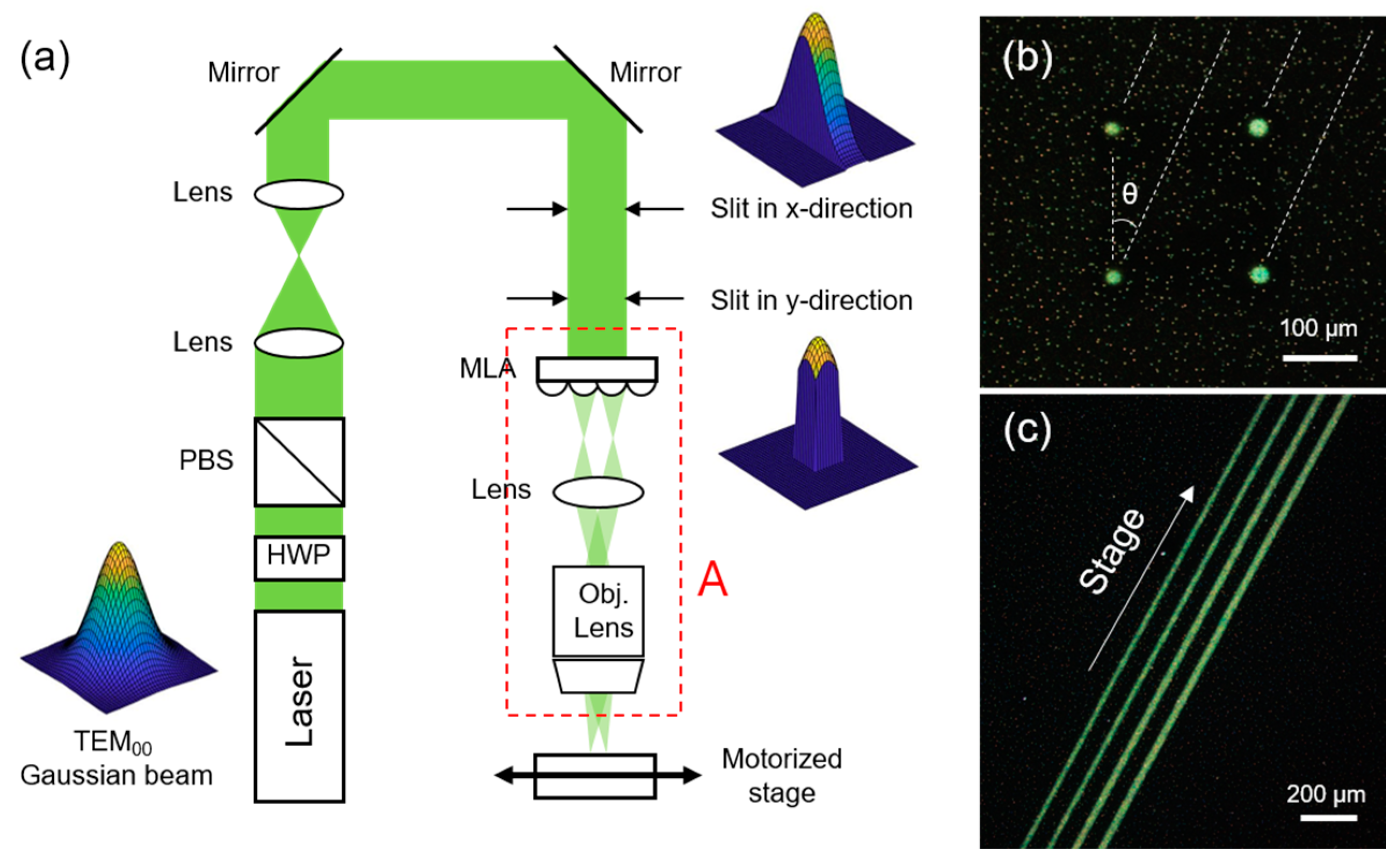 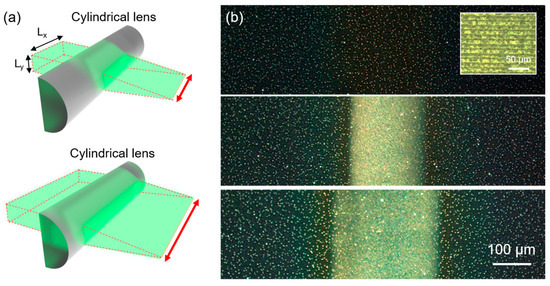 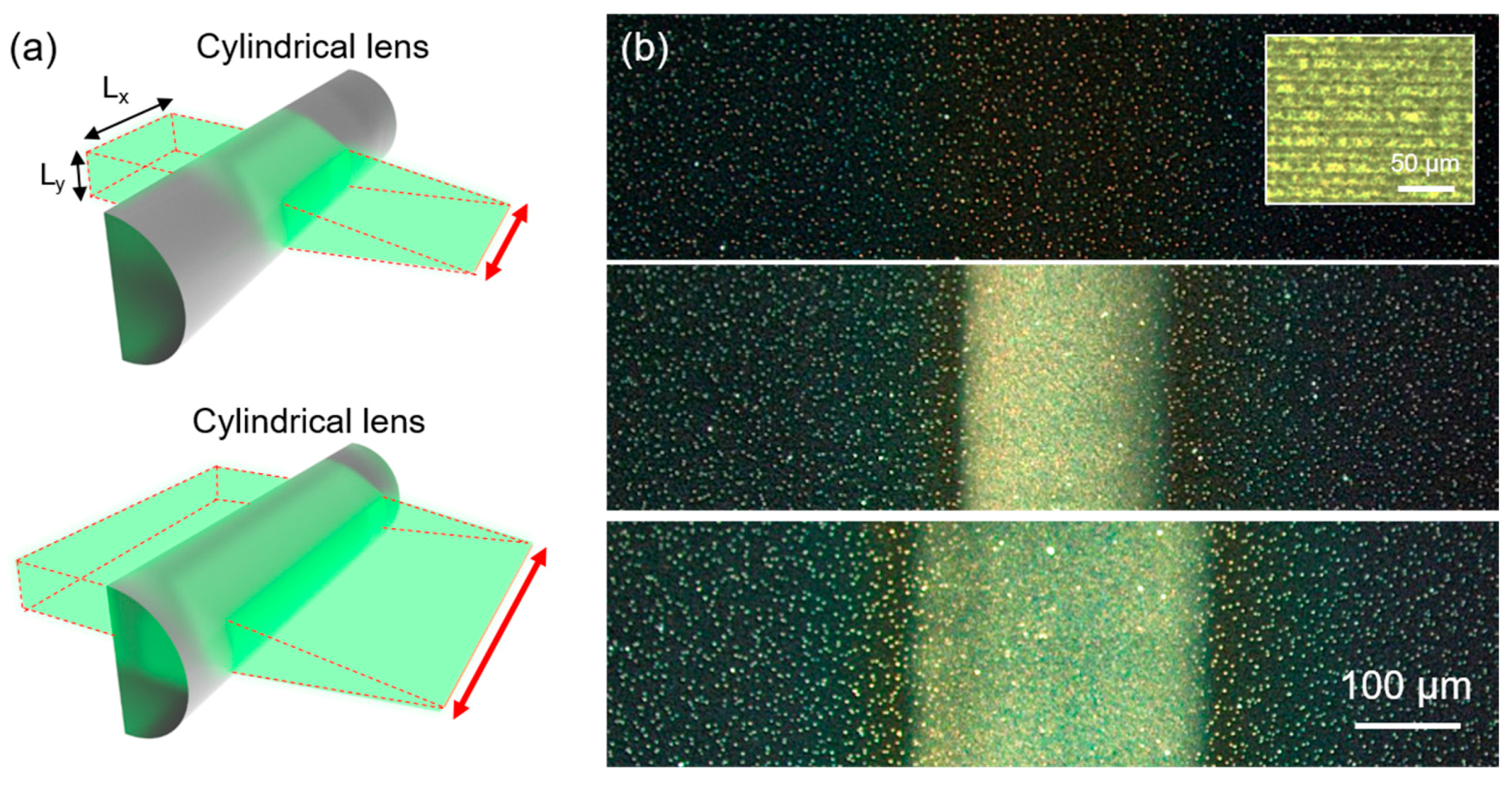