A linear piezoelectric actuator based on the stick-slip principle is presented and tested in this paper. With the help of changeable vertical preload force flexure hinge, the designed linear actuator can achieve both large travel stick-slip motion and high-resolution stepping displacement. The developed actuator mainly consists of a bridge-type flexure hinge mechanism, a compound parallelogram flexure hinge mechanism, and two piezoelectric stacks. The mechanical structure and motion principle of the linear actuator were illustrated, and the finite element method (FEM) is adopted. An optimal parametric study of the flexure hinge is performed by a finite element analysis-based response surface methodology. In order to investigate the actuator’s working performance, a prototype was manufactured and a series of experiments were carried out. The results indicate that the maximum motion speed is about 3.27 mm/s and the minimum stepping displacement is 0.29 μm. Finally, a vibration test was carried out to obtain the first natural frequency of the actuator, and an in situ observation was conducted to investigate actuator’s stick-slip working condition. The experimental results confirm the feasibility of the proposed actuator, and the motion speed and displacement are both improved compared with the traditional stick-slip motion actuator. View Full-Text
Keywords: piezoelectric; actuator; flexure hinge; stick-slip piezoelectric; actuator; flexure hinge; stick-slip
►▼ Show Figures 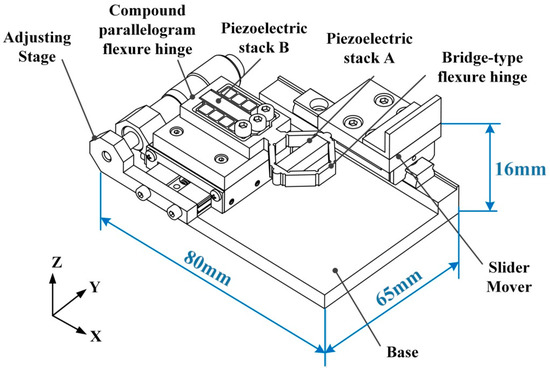