Quantification of Vortex Generation Due to Non-Equilibrium Electrokinetics at the Micro/Nanochannel Interface: Spectral Analysis

To compensate for the insufficiency and instability of solder paste dispensing and printing that are used in the SMT (Surface Mount Technology) production process, a noncontact solder paste jetting system driven by a piezoelectric stack based on the principle of the nozzle-needle-system is introduced in this paper, in which a miniscule gap exists between the nozzle and needle during the jetting process. Here, the critical jet ejection velocity is discussed through theoretical analysis. The relations between ejection velocity and needle structure, needle velocity, and nozzle diameter were obtained by FLUENT software. Then, the prototype of the solder paste jetting system was fabricated, and the performance was verified by experiments. The effects of the gap between nozzle and needle, the driving voltage, and the nozzle diameter on the jetting performance and droplet diameter were obtained. Solder paste droplets 0.85 mm in diameter were produced when the gap between the nozzle and needle was adjusted to 10 μm, the driving voltage to 80 V, the nozzle diameter to 0.1 mm, and the variation of the droplet diameter was within ±3%.
Keywords: solder paste; jetting; piezoelectric; ejection behavior solder paste; jetting; piezoelectric; ejection behavior

In the SMT (Surface Mount Technology) production process, the solder paste printing on the circuit board is often the first step of the entire SMT production process; the printing is also one of the most critical and important processes [1]. The solder paste printing process can be divided into three types: printing, dispensing, and jetting, which is the most recently developed process [2]. Printing is only suitable for mass production because of long production and low flexibility. Needle dispensing relies on the dispensing needle guide solder paste point formed on the substrate. The main types are time pressure [3,4], rotary screw [5], and piezoelectricity [6]. Needle dispensing is a useful supplement in Ball Grid Array (BGA) rework, being solder coated, forming 3D graphics, and other aspects of the screen printing. However, the most important feature of this technology is that there is a need for accurate control of the needle height, that solder dispensing is slow, and that dispensing repeat accuracy is poor. As electronic products miniaturize, and with improvements in density and 3D-structures, traditional solder paste dispensing technology has been unable to meet the existing technology market. The appearance of the solder paste jetting system is a major breakthrough in the SMT industry.
Jetting is the process in which fluid is ejected rapidly through a nozzle, using fluid momentum to break free from the nozzle [7,8]. Jetting technology has been widely used in rapid manufacture [9,10], life sciences [11,12,13], electronic fabrication [14,15], and so on due to the fast manufacturing time, high operating flexibility, and low production cost. To use these advantages in small-scale, high-mix electronics solder paste printing, the Swedish company Mycronic developed the first solder paste jetting system [2,16,17]. In this jetting system, the solder paste is acted upon by instant high pressure from the impact of an plunger and then ejected rapidly onto the substrate through a nozzle [18]. This system can make 3D deposits, a complete BGA rework, and replace printing with mass production. A drawback of this system [2] is that the number of certified jettable solder pastes is limited; these are only supported by the machine supplier.
In order to achieve a wider variety of solder paste jetting for 3D circuitry, a solder paste jetting system driven by piezoelectric stack is introduced and experimented in this paper based on the principle of the nozzle-needle-system. Nozzle-needle-systems [19,20,21,22] are widely used to jetting high viscosity adhesives in electronic packaging technology, in which the fluid in the nozzle orifice is forced by a high pressure, induced by the needle’s impact on the nozzle and jetting out to produce a drop. However, for solder paste, which is a liquid-solid two-phase fluid, the solder particles will be crushed and accumulated under the impact force. That will not only destroy the internal components of the solder paste, but also clog the nozzle orifice. Thus, the present study proposes a solder paste jetting system driven by a piezoelectric stack, in which a miniscule gap exists between the nozzle and needle instead of the needle hitting the nozzle directly. Fundamental equations and simulation analysis by FLUENT software (v6.3.26) for the jetting system are presented to express the critical jet ejection velocity. Then, the prototype of the solder paste jetting system was fabricated, and the performance was then verified by experiments.

2. Principle of the Jetting System

The model structure shown in Figure 4 uses a concave spherical needle to strengthen the driving force by focusing on the solder paste. The simulation model divided the grid and then imported it into FLUENT for analysis by using the mixture model, in which the boundary conditions for the inlet pressure and outlet pressure were 0.2 and 0 MPa, respectively. The solder paste flow could be approximated as a stable laminar flow motion. Certain parameters of the solder paste are shown in Table 1.

Considering the above simulation boundary conditions, and the needle accelerates to move 180 μm within different times from a stationary state, Figure 6 shows the velocity distribution in the nozzle.
The simulation in Figure 6 indicates that the maximum solder paste velocity in the nozzle orifice is gradually reduced with the increase in the moving time. When the moving times change from 0.1 ms to 0.25 ms, the needle impact velocity dropped from 3 to 1.44 m·s−1, and the maximum solder paste velocity drops from 31.7 to 14 m·s−1. One reason is that the solder paste jetting relies on the pressure in the chamber to instantly increase in a short time by the movement needle. High needle velocity easily produces high instantaneous pressure in the gap between nozzle and needle, which also corresponds to higher ejection velocity. Predictably, solder paste injection cannot be formed when the movement time of the needle is greater than a certain value.

3.2. Gap Between Nozzle and Needle

The gap was adjusted by the sleeve. The piezoelectric drive power output voltage (80 V) was set so that the needle reached maximum displacement. We adjusted the sleeve and nozzle upward until the nozzle contacted with the needle, and we adjusted then the sleeve and nozzle downward. Scales were present on the sleeve, and the nozzle moved 10 μm relative to the needle of each scale. In the experiment, the nozzle diameter, supply pressure, and drive signal were 0.1 mm, 0.6 MPa, and high-voltage 80 V, 5 ms; low-voltage 0 V, 2.5 ms, respectively. The droplet diameter under different gap between the nozzle and needle is shown in Figure 9.
As shown in Figure 9, the droplet diameter was inversely proportional to the gap. The smaller the gap was, the bigger the droplet diameter of injected solder paste became. However, when the gap was bigger than 60 μm, the solder paste could not jet out and instead hung at the nozzle, as shown in Figure 10. That is, the bigger the gap between the nozzle and needle was, the smaller the instantaneous pressure generated between the nozzle and needle when the needle moved toward the nozzle. So that, the smaller amount of solder paste can be injected. When the gap increased to more than 60 μm, the instantaneous pressure was not sufficient to generate enough velocity to overcome the tensile viscous force, and the solder paste could not be separated from the nozzle. Assuming the solder paste viscosity η is constant, so that the extensional viscosity was three times that of the solder paste viscosity η. From Equation (8), the ejection velocity to achieve injection had to exceed 1.54 m/s when the gap was 60 μm.

The same solder paste was used in the experiment. Multiple droplets on the same location or droplets ejected quickly were achieved by the solder paste jetting system. Figure 13 shows a 10 × 10 droplet array with an average diameter of 0.85 mm when the gap between the nozzle and needle was adjusted to 10 μm, the driving voltage to 80 V, the nozzle diameter to 0.1 mm, and the variation of the droplet diameter was within ±3%.

This study is supported by the National Natural Science Foundation of China (Grant No. 51475198). 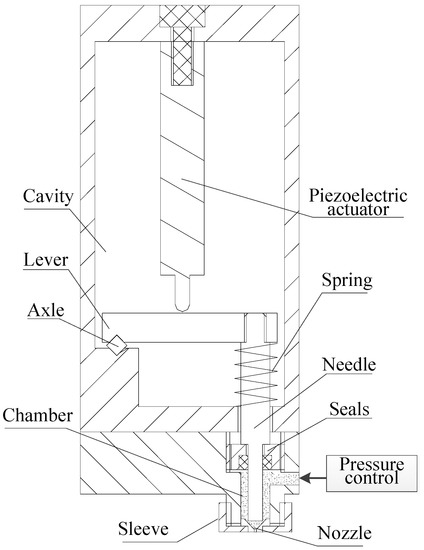 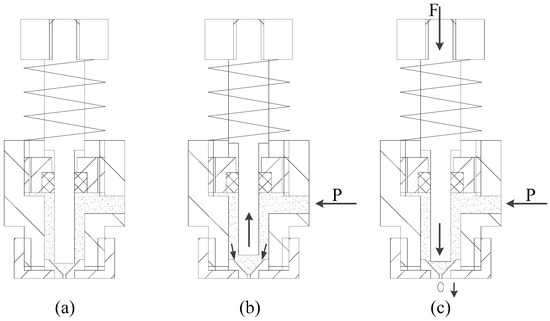 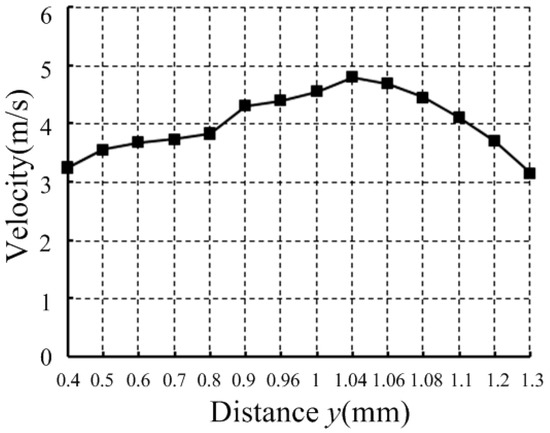 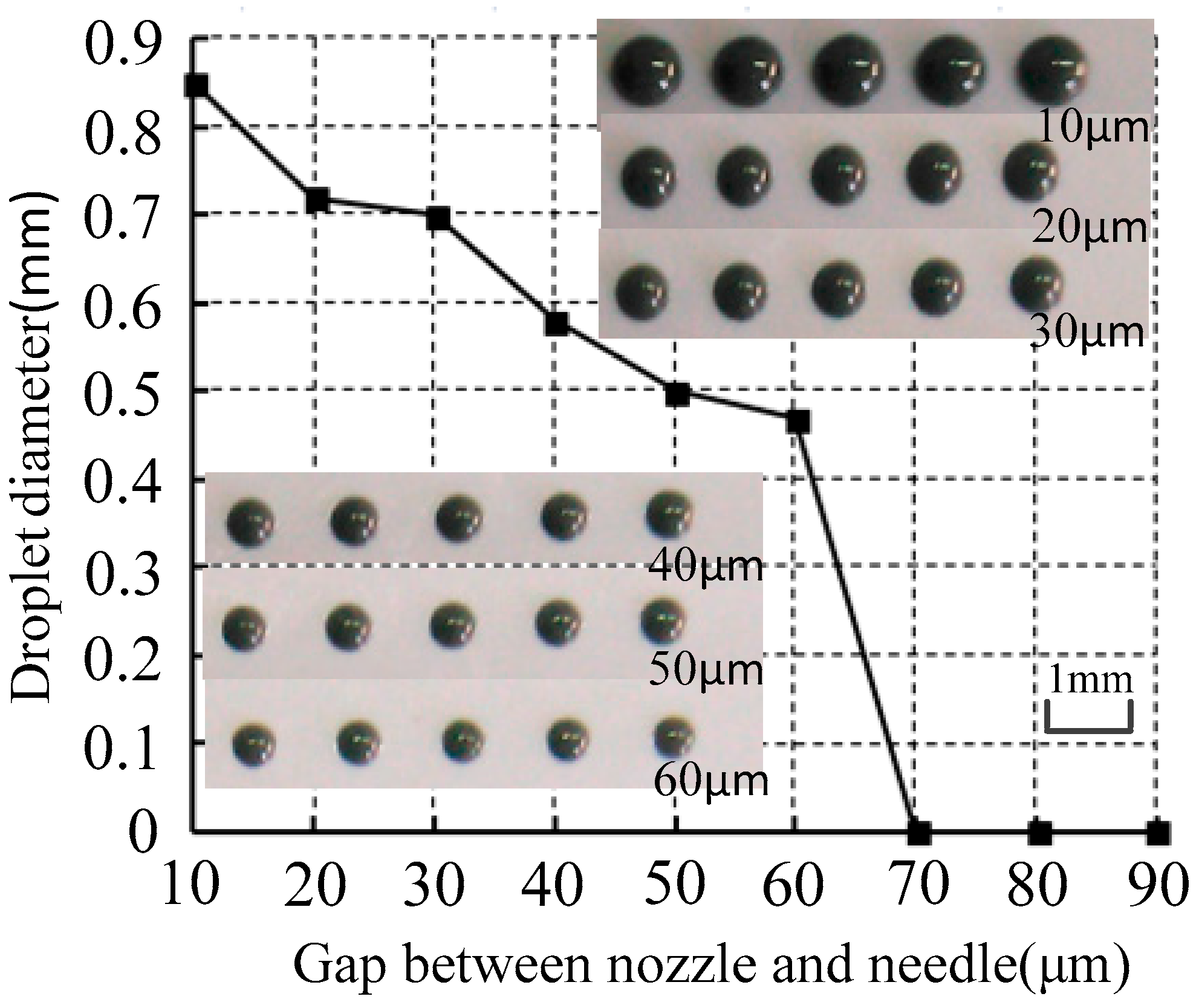 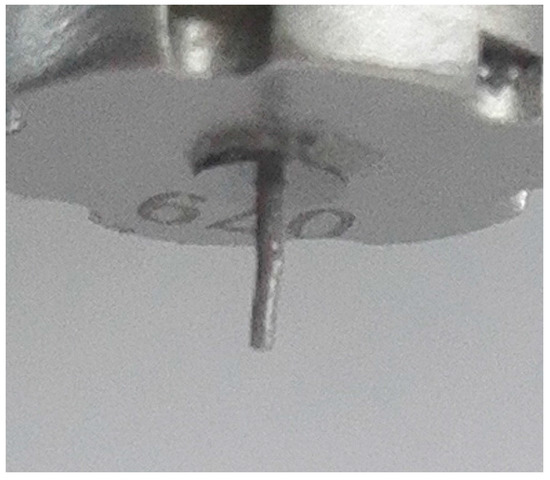 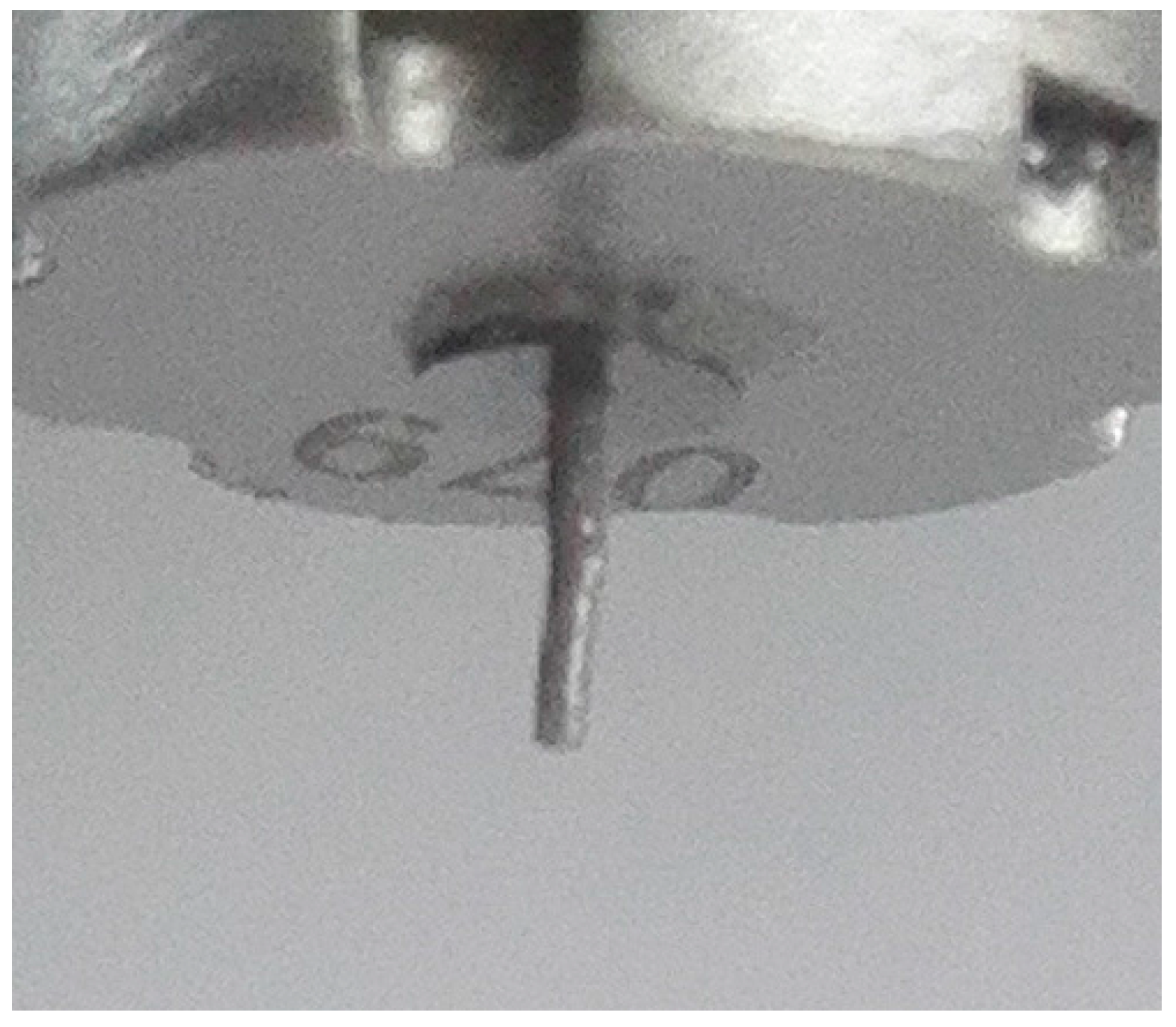 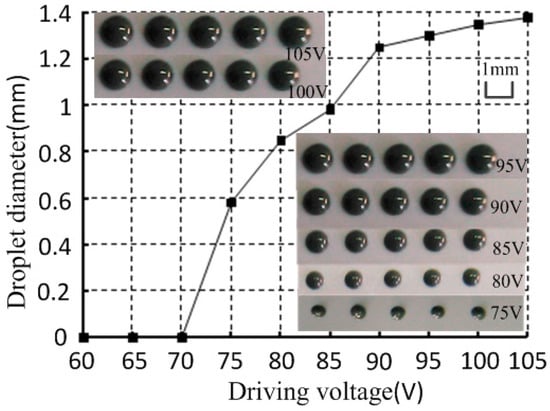 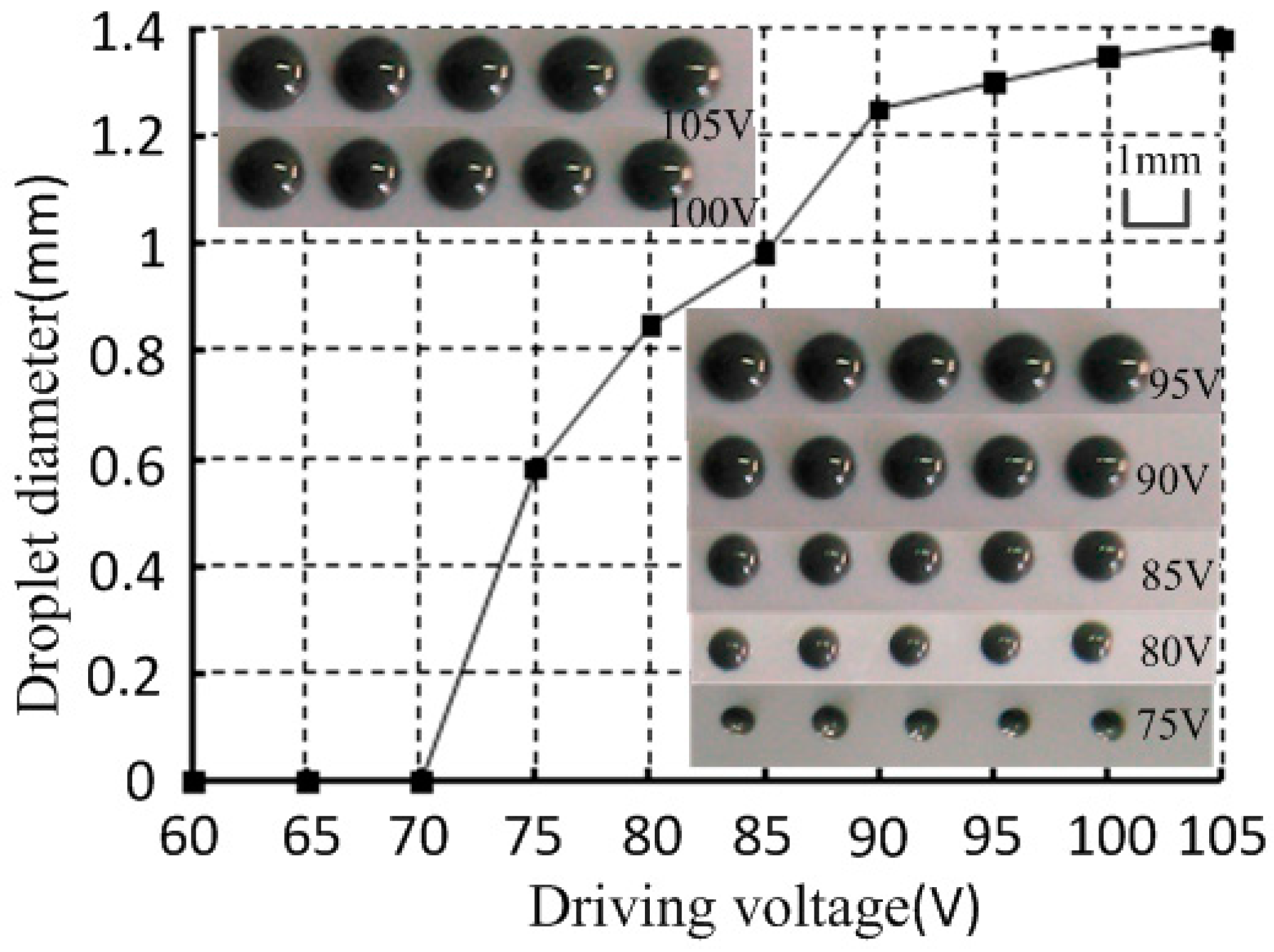 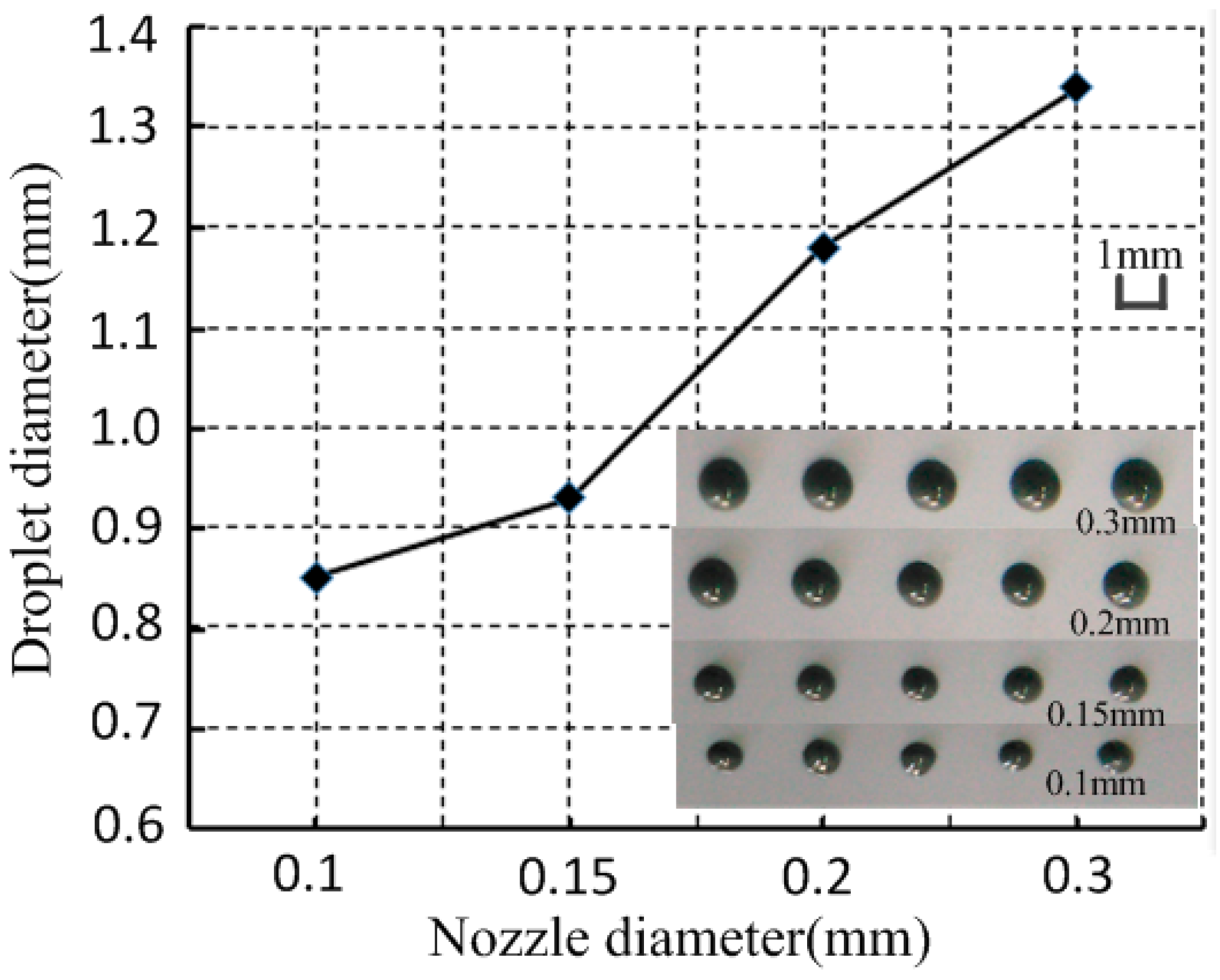 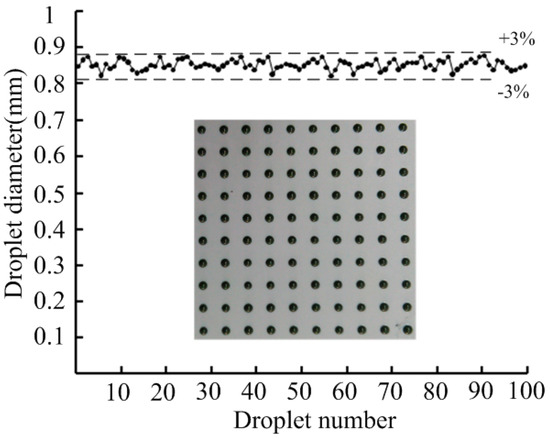 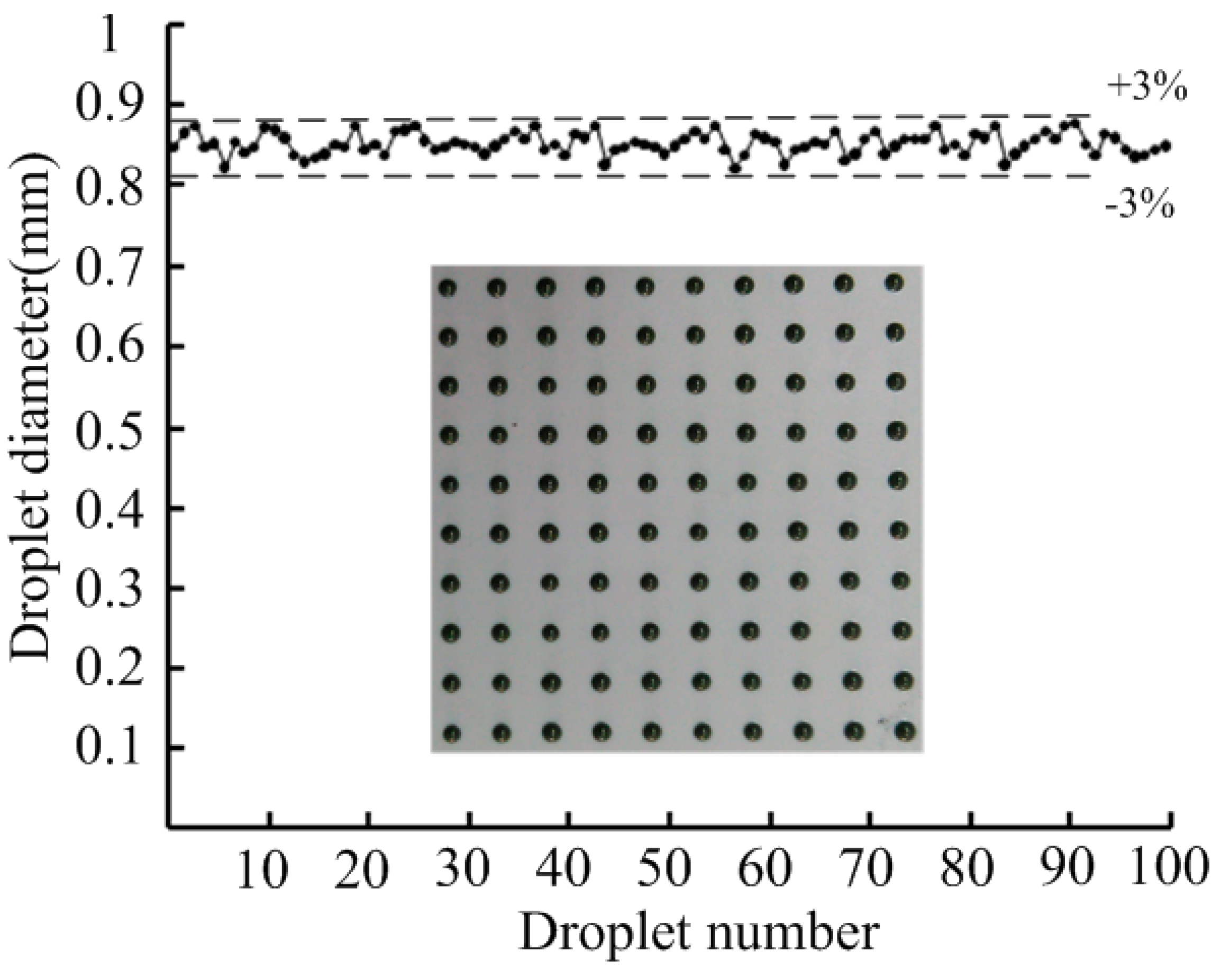 Table 1. Parameters of the solder paste.