α-conotoxin GI, a short peptide toxin in the venom of Conus geographus, is composed of 13 amino acids and two disulfide bonds. It is the most toxic component of Conus geographus venom with estimated lethal doses of 0.029–0.038 mg/kg for humans. There is currently no reported analytical method for this toxin. In the present study, a sensitive detection method was developed to quantify GI in human plasma using a solid-phase extraction (SPE) column (polystyrene–divinyl benzene copolymer) combined with liquid chromatography/electrospray ionization tandem mass spectrometry (LC-ESI-MS/MS) in the multiple reaction monitoring (MRM) mode. The plasma samples were treated with a protein precipitating solvent (methanol: acetonitrile = 50:50, v/v). GI in the solvent was efficiently extracted with an SPE column and was further separated by a Grace Alltima HP C18 (50 × 2.1 mm, 5 μm) column at a flow rate of 0.4 mL/min. Water (with 2% methanol) acetonitrile (with 0.1% acetic acid) was selected as the mobile phase combination used in a linear gradient system. α-Conotoxin GI was analyzed by an API 4000 triple quadrupole mass spectrometer. In the method validation, the linear calibration curve in the range of 2.0 to 300.0 ng/mL had correlation coefficients (r) above 0.996. The recovery was 57.6–66.8% for GI and the internal standard. The lower limit of quantification (LLOQ) was 2 ng/mL. The intra- and inter-batch precisions were below 6.31% and 8.61%, respectively, and the accuracies were all within acceptance. GI was stable in a bench-top autosampler through long-term storage and freeze/thaw cycles. Therefore, this method is specific, sensitive and reliable for quantitative analysis of α-conotoxin GI in human plasma.
Keywords: α-conotoxin GI; detection; solid-phase extraction; LC-ESI-MS; human plasma α-conotoxin GI; detection; solid-phase extraction; LC-ESI-MS; human plasma

Commonly known as cone snails, the marine gastropod genus Conus is a hyperdiverse group of specialized predators, which use venom to subdue the prey and for self-defense. There are an estimated number of more than 700 species of cone snails around the world [1]. Generally, cone snails are divided into three groups based on the prey they subdue: piscivorous, molluscivorous and vermivorous [2,3]. The vermivorous species are predominant and account for about 75% of all cone snails [4], but the piscivorous (~10%) species are the most poisonous and some even fatal to humans [5,6,7]. Among all piscivorous species, Conus geographus (C. geographus) is the most dangerous to humans, which resulted in half of the known human envenomations and almost all were fatal [8,9]. The estimated lethal dose of the C. geographus venom is about 0.029 mg/kg~0.038 mg/kg for humans [10]. After being stung by this species, people experience numbness and local swelling at the sting site, followed by a series of toxic symptoms, including blurred vision or diplopia, fatigue, nausea, stomach cramps, facial paralysis, etc. [7]. Symptoms can aggravate over time leading to generalized paralysis and respiratory failure. Without medical treatment, coma and death may follow.
A series of paralytic peptides have so far been found in the venom of C. geographus [11]. These peptide conotoxins selectively target ion channels, e.g., Na+, K+ and Ca2+ channels, or membrane receptors (nAChR, NMDAR and G-protein-coupled receptors) [12,13,14,15]. For example, α-conotoxins GI, GIA and GII are potent antagonists for nicotine acetylcholine receptors (nAChRs) [16,17,18]; μ-conotoxins GIIIA, GIIIB and GIIIC selectively target sodium ion channels [19,20,21]; ω-conotoxins GVIA, GVIB, GVIC, GVIIA and GVIIB inhibit calcium ion channels [22,23,24]. GI (Figure 1) contains 13 amino acid residues and two disulfide bridges and is the most poisonous of all the peptide toxins in the venom of C. geographus. It functions by selectively inhibiting muscular nAChRs. The lethal dose of GI in mice is between 8 and 12 μg/kg (intraperitoneal, i.p.) [25,26]. Moreover, no antidote or anti-venom is currently available for GI. Due to of its ease of production, GI may be potentially used by terrorists as a biological weapon [27].
In the present study, a sensitive analytical method for GI in human blood plasma was developed. GI was sensitively detected using a solid-phase extraction (SPE) column combined with liquid chromatography/electrospray ionization tandem mass spectrometry (LC-ESI-MS/MS) in the multiple reaction monitoring (MRM) mode. After precipitation with the mixed solvents of methanol and acetonitrile, GI in human plasma was efficiently concentrated with an SPE column and was further separated by a reverse-phase column. The analytical method was validated for linearity, accuracy, precision, lower limit of quantification (LLOQ), and stability. The recovery rate of GI in blood samples was also determined. The results demonstrate that this method can achieve quick and sensitive determination of GI in human plasma and blood in envenomation accidents and potential bioterrorism incidents.

The plasma samples of GI were treated with methanol/acetonitrile (50:50, v/v) for protein precipitation. The percent recoveries of GI and internal standard (IS) MI[ΔR2] (Figure 1) were better than those obtained by using acetonitrile alone (data not shown). After the dilution of the above extract with water (the final ratio of solvent to water was 1:3), the GI samples were further concentrated and purified by an SPE column with methanol/water. GI was eluted with 70% methanol/water containing 1% acetic acid and collected after washing with 10% and 40% methanol.

Stock solution of GI or internal standard MI[ΔR2] was diluted with the diluent and injected in the peristaltic pump mode. The optimized parameters for the MRM analysis of analytes (GI) and internal standard (MI[ΔR2]) were 480.0/473.6 and 446.5/437.6, respectively. In addition, transition 480.0→626.6 was also used to avoid false positives in the GI analysis. The MS/MS full scan spectrogram is shown in Figure 3.

The stabilities of benchtop, freezer storage and freeze/thaw cycles of the QC samples were evaluated. The results are summarized in Table 4. GI was stable after three freeze (−20 °C) and thaw cycles in plasma. It was also stable in the plasma for at least 5.25 h at room temperature and for 14 days at −20 °C. Stock solutions of GI and internal standard MI[ΔR2] were found to be stable for 19 days at 2–8 °C and for 6 h at room temperature.

2.9. Analysis of GI in Human Blood

Generally, a precipitating solvent is used to precipitate most proteins in plasma and keep the analytes in solution [24,28,29]. In the present assay, a mixed solvent of methanol/acetonitrile (50:50, v/v) was used. α-Conotoxin GI and internal standard MI[ΔR2] were soluble upon addition of the mixed solvent to the plasma samples. This method is similar to the analyses of small compounds, but different from the analyses of longer 125-I-peptides, in which the analyte is also precipitated together with plasma proteins.
Several columns have been used to enrich analytes so far, such as the C18 reverse phase column, ion exchange column and magnetic beads [30,31,32,33]. In this experiment, the polystyrene–divinyl benzene SPE column was used to recover α-conotoxin GI in the precipitating solvent. Compared to other SPE columns, the polystyrene–divinyl benzene column was less expensive, easier to use, and the recovery (>52.8%) was satisfactory. It is possible to improve the recovery by increasing the volume of elution solvent. However, the interfering substances would also increase, resulting in matrix effects.
α-conotoxin MI, another α-conotoxin found in C. magus, is also fatal to human [26]. In order to obtain the internal standard where the molecular weight is close to GI and contains 13 amino acids with two disulfide bonds, MI mutant (MI[ΔR2]) was selected as an internal standard.
Furthermore, our results demonstrated that GI was stable in the plasma for at least 5.25 h at room temperature and for 14 days at −20 °C; it was also stable in human blood for at least 3 h at room temperature. Accounting for the absolute recovery of conotoxin GI in human blood (42%) and the LLOQ of GI (2 ng/mL) in human plasma, this analytical method can detect GI in the blood as low as 5 ng/mL. The lethal dose of GI (intravenous, i.v.) in human has not been established so far. However, the lethal dose of GI in mice (i.p.) has been determined to be 8~12 μg/kg [25,26], suggesting a possible LD50 of more than 8 μg/kg (~8 ng/mL, i.v.) for humans. Therefore, this method is able to detect GI in at least 3 h after intoxication, requiring approximately 2 ml of the blood of the poisoned victim.

In this study, we developed an SPE-LC-ESI-MS method for the detection of α-conotoxin GI in human plasma. GI and internal standard MI[ΔR2] were well recovered from human plasma after protein precipitation with the mixed solvent of methanol/acetonitrile (50/50%, v/v) and an SPE column (polystyrene–divinyl benzene copolymer). This method is sensitive with the LLOQ of 2.0 ng/mL and has good linearity (r > 0.996) in the concentration range of 2.0–300.0 ng/mL. The intra- and inter-batch precisions were below 6.31% and 8.61%, respectively, and the accuracies were all within acceptance. GI in the plasma could be sensitively detected after storage in the plasma at room temperature for at least 5.25 h and at −20 °C for 14 days. Furthermore, this method was successfully applied to the quantification of GI in human blood. It may be valuable for the identification of envenomation accidents and possible bioterrorism incidents.

A 0.30 mL aliquot of human drug-free plasma sample was spiked with 30 μL of the working solution of GI or QC. Unknown samples or blank control samples were spiked with 30 μL of the diluent. The internal standard solution (30 μL) was then spiked into each sample and fully mixed, followed by the addition of 0.60 mL precipitating agent (methanol:acetonitrile = 50:50, v/v). The solution was vortexed and centrifuged at 12,000 rpm for 5 min. A 0.750 mL aliquot of the supernatant in each sample was mixed with 2.250 mL water. The resulting solution was extracted on the SPE column. The SPE column was rinsed with methanol (0.500 mL) twice, and conditioned twice with pure water (0.500 mL) prior to use. The prepared sample (3.0 mL) was then transferred onto the SPE column, and washed by 0.50 mL of 10% and 40% methanol/water (v/v) sequentially. Finally, 0.15 mL of 70% methanol/water with 1% acetic acid was added, and the eluent was collected, diluted five times in water, and analyzed by LC-MS/MS.

5.6. Analysis of GI in Human Blood

The blood samples were collected from four individuals, each with two duplicate samples. A 40 μL aliquot of the GI working standard solution (5 μg/mL) was diluted in 1960 μL human blood and mixed slightly, resulting in a final GI concentration 100 ng/mL. The blood samples were incubated at 37 °C for 10 min to test recoveries and were incubated at room temperature for 3 h to test stabilities. The samples used for the recovery test were centrifuged at 3000 rpm to separate plasma. A 0.30 mL aliquot of the plasma samples was then processed as described in the “sample preparation” section and prepared for LC-MS/MS analysis. The mixed plasma was used in the preparation of standard curves.

S.Y. synthesized peptides and verified the results; B.Y. and L.Y performed the experiments; Q.D. designed research and wrote the paper. 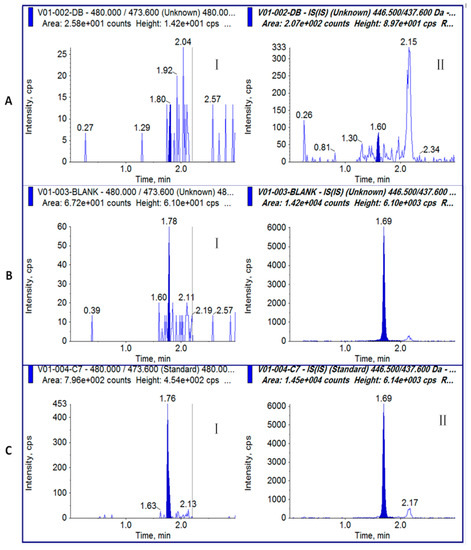 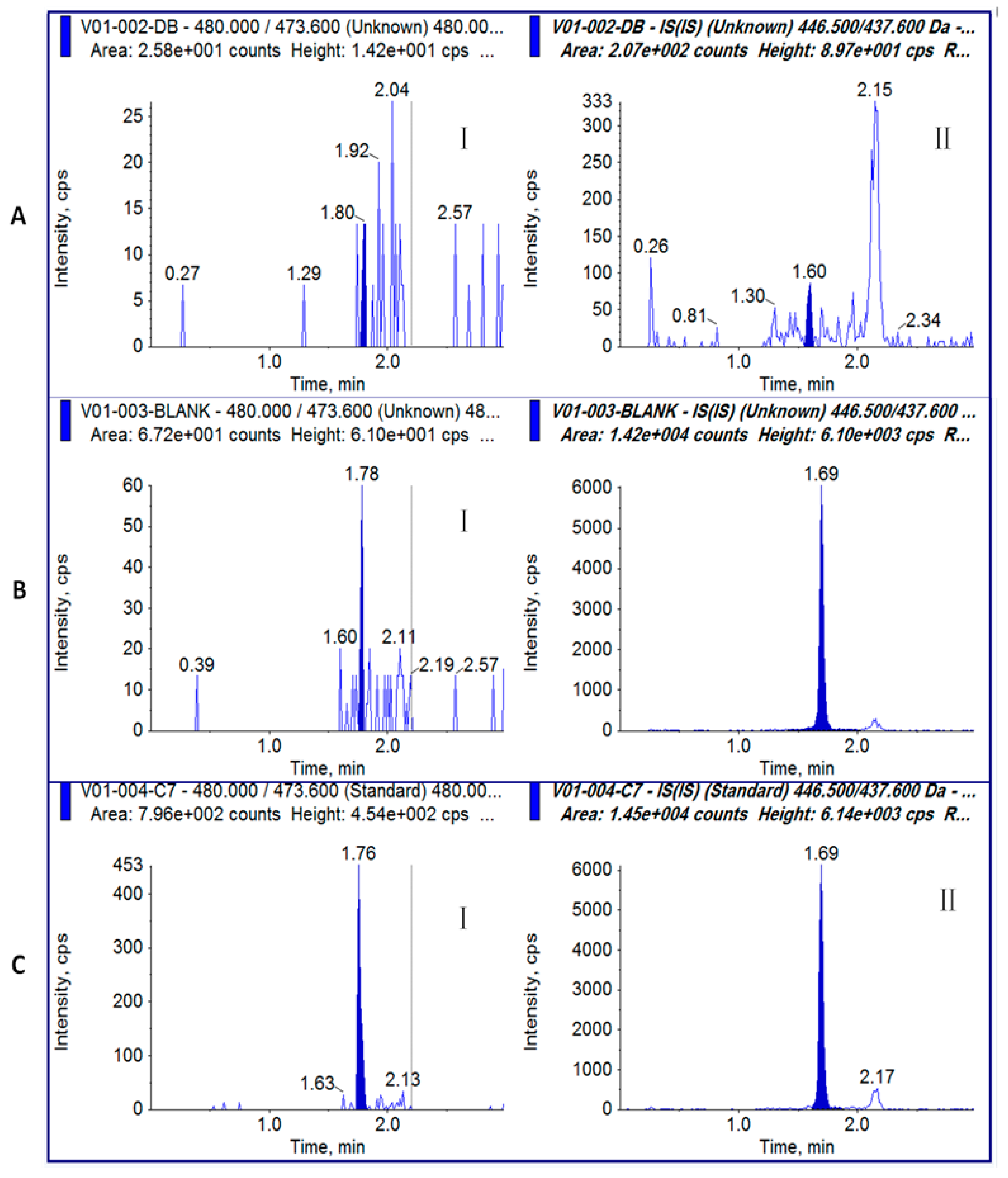 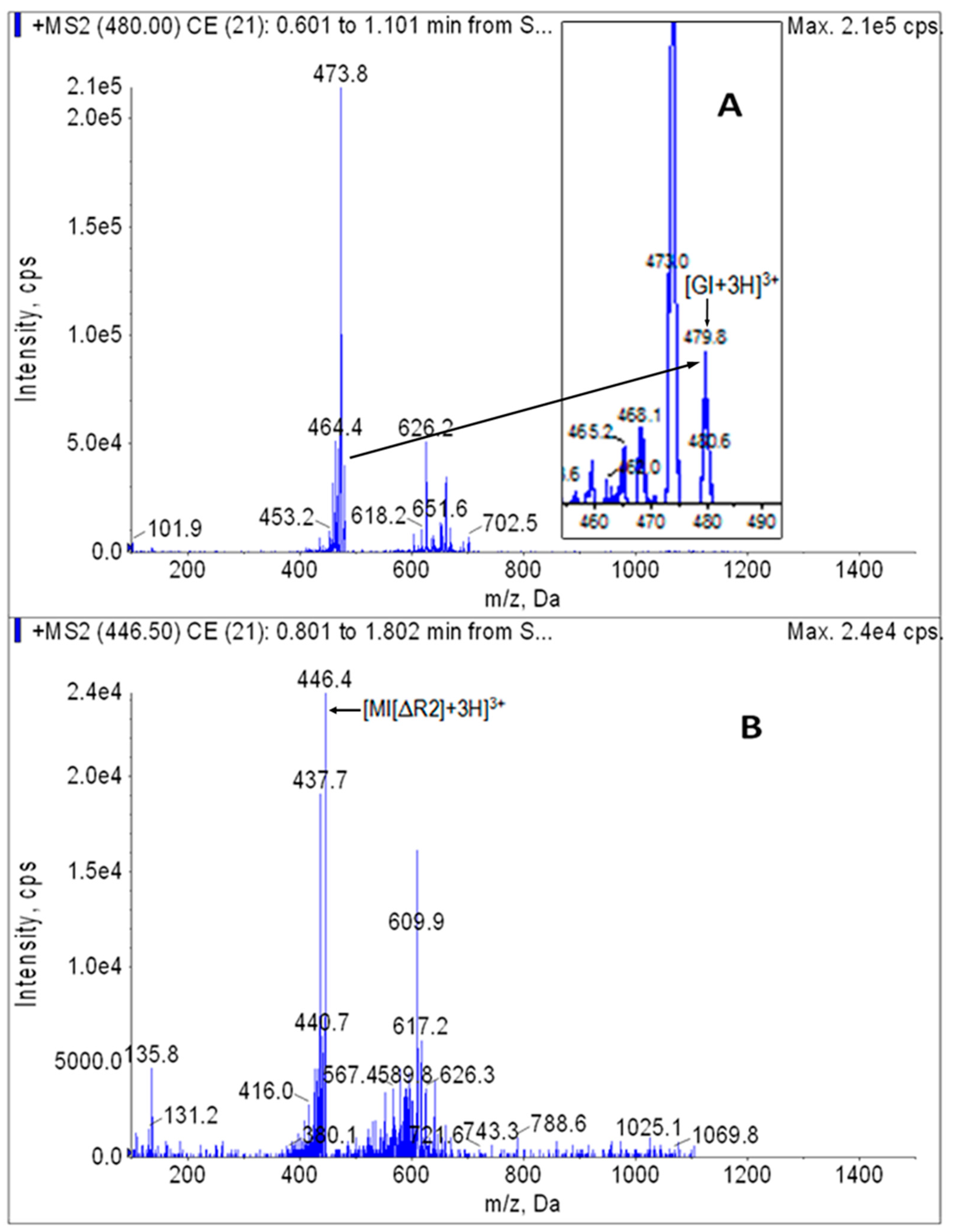