α-conotoxin GI, a short peptide toxin in the venom of Conus geographus, is composed of 13 amino acids and two disulfide bonds. It is the most toxic component of Conus geographus venom with estimated lethal doses of 0.029–0.038 mg/kg for humans. There is currently no reported analytical method for this toxin. In the present study, a sensitive detection method was developed to quantify GI in human plasma using a solid-phase extraction (SPE) column (polystyrene–divinyl benzene copolymer) combined with liquid chromatography/electrospray ionization tandem mass spectrometry (LC-ESI-MS/MS) in the multiple reaction monitoring (MRM) mode. The plasma samples were treated with a protein precipitating solvent (methanol: acetonitrile = 50:50, v/v). GI in the solvent was efficiently extracted with an SPE column and was further separated by a Grace Alltima HP C18 (50 × 2.1 mm, 5 μm) column at a flow rate of 0.4 mL/min. Water (with 2% methanol) acetonitrile (with 0.1% acetic acid) was selected as the mobile phase combination used in a linear gradient system. α-Conotoxin GI was analyzed by an API 4000 triple quadrupole mass spectrometer. In the method validation, the linear calibration curve in the range of 2.0 to 300.0 ng/mL had correlation coefficients (r) above 0.996. The recovery was 57.6–66.8% for GI and the internal standard. The lower limit of quantification (LLOQ) was 2 ng/mL. The intra- and inter-batch precisions were below 6.31% and 8.61%, respectively, and the accuracies were all within acceptance. GI was stable in a bench-top autosampler through long-term storage and freeze/thaw cycles. Therefore, this method is specific, sensitive and reliable for quantitative analysis of α-conotoxin GI in human plasma. View Full-Text
Keywords: α-conotoxin GI; detection; solid-phase extraction; LC-ESI-MS; human plasma α-conotoxin GI; detection; solid-phase extraction; LC-ESI-MS; human plasma
►▼ Show Figures 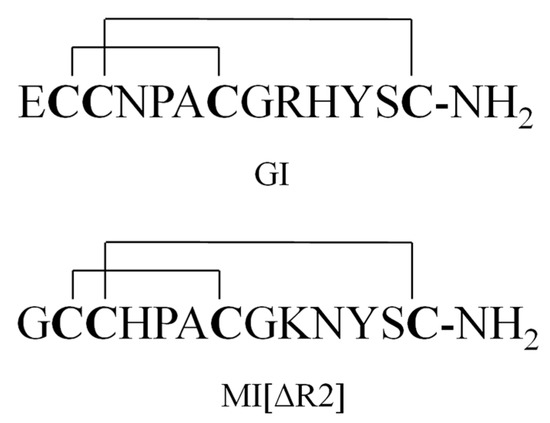