Tetrodotoxin-Producing Bacteria: Detection, Distribution and Migration of the Toxin in Aquatic Systems
Next Article in Special Issue

A Biologically-Based Computational Approach to Drug Repurposing for Anthrax Infection

Anthrax lethal toxin (LeTx) is a key virulence factor of Bacillus anthracis, the causative agent of anthrax [1]. It comprises the intracellular transporter protective antigen (PA) and the metalloprotease lethal factor (LF), where LF cleaves and inactivates the mitogen-activated protein kinase (MAPK) kinases (MEK) 1 to 6, except 5 [2,3]. Inactivation of MEKs results in an almost complete inactivation of the extracellular signal-regulated kinases (ERKs) and p38 MAPKs, but partial or no effects on c-Jun N-terminal kinases [3,4,5,6]. Inactivation of ERKs and p38 MAPKs leads to cell cycle arrest and cell death in both immune and non-immune cells [4,7,8,9,10,11,12,13,14,15,16]. However, the extent of cytotoxicity elicited by LeTx is dependent on cell types, differentiation stages and their capacity in activating adaptive responses [4,14,15,16]. In human macrophages, inhibition of ERKs by LeTx leads to cell cycle arrest at G0/1 phase due to depletion of cyclin D1 [15], which is required for cell cycle progress from G1 to S phase [17]. In contrast, cells with constitutively active or adaptively activating the PI3K-AKT (also known as protein kinase B) signaling axis are resistant to LeTx- or ERK inhibition-induced cell cycle arrest through protecting degradation and/or inducing expression of cyclin D1 [15,18,19]. However, the mechanism by which LeTx activates the adaptive PI3K-AKT signaling axis is yet to be elucidated.
In certain murine macrophages, LeTx rapidly induces pyroptosis, which is a programmed necrotic cell death mediated by the NACHT-leucine-rich repeat and pyrin domain-containing protein 1b and inflammasome [20]. These macrophages also undergo a similar adaptive response as in human monocytes and become resistant to LeTx-induced pyroptosis [5,21,22]. Our previous studies elucidated the adaptive response as an epigenetic phenomenon that silences mitochondrial cell death genes through the histone deacetylase (HDAC) 8 [23,24]. This study examined the role and mechanism of HDAC8 in adaptive responses of the human monocytic THP-1 cells to LeTx-induced cell cycle arrest. We found that HDAC8 played a pivotal role in activating the PI3K-AKT signaling axis in LeTx-exposed cells through inducing histone H3 lysine 27 tri-methylation (H3K27me3) and subsequent inhibition of PTEN expression.

To examine the role of HDAC8 in cytotoxic effects of LeTx, THP-1 cells were treated with LeTx in the presence or absence of the HDAC8-specific activator TM-2-51 (TM) [25] or inhibitor PCI-34051 (PCI) [26], and total live cell numbers were counted each day for four days (Figure 1A). Cell numbers of LeTx-treated cells remained constant for 2–3 days and then started increasing on Day 3 (Figure 1A). Numbers of cells treated with both LeTx and PCI were steadily decreased throughout the experimental period (four days). However, cells treated with both LeTx and TM were continuously increased, albeit with a slower rate than that of non-treated cells. The cytotoxic and cytoprotective effects of PCI and TM, respectively, were similarly observed in two different doses of LeTx (Figure 1B). Significant cytoprotective effects of TM were detected, starting at 13 µM and maximum at 25 µM (Figure 1C). In contrast, PCI gradually increased cytotoxicity of LeTx, becoming statistically significant at 0.5 µM and maximally at 5 µM (Figure 1D).

2.3. HDAC8 Activity is Required for Activating AKT in LeTx-Treated Cells

Previously, we showed that activation of PI3K-AKT signaling axis prevents LeTx-induced cell cycle arrest [15]. To examine if HDAC8 is involved in the activation of AKT in LeTx-treated cells, we analyzed phosphorylation of AKT at the Serine 473 residue. AKT phosphorylation was increased in 24 h and peaked in 72 h after LeTx treatments (Figure 3A). In line with the previous results (Figure 1 and Figure 2), AKT phosphorylation was inhibited by PCI in 48 h post LeTx treatment; whereas, TM further enhanced AKT activation in 24 h after LeTx-treatment. The differences in AKT activation were not due to the levels of LeTx present in cells, since almost complete degradation of MEK3 was detected in all samples throughout the experimental time frame (Figure 3A, the 2nd lane). In addition, the AKT phosphorylation was inhibited by the PI3K inhibitors LY294002 (LY) and wortmannin (Wort; Figure 3B, upper panel), and LY further enhanced cytotoxic effects of LeTx (Figure 3B, lower panel). These results suggest that both HDAC8 and PI3K were involved in LeTx-induced AKT activation.

HDAC8 is an epigenetic modifier that regulates gene transcription. Among several signaling molecules known to regulate PI3K and AKT activation, expression levels of PTEN have shown to be inversely correlated with AKT activation in many cell types [27]. In THP-1 cells, LeTx suppressed PTEN expression in both mRNA and protein levels in 48 h after treatments (Figure 4A). PCI inhibited PTEN down-regulation and subsequently reduced AKT phosphorylation in LeTx-treated cells (Figure 4B). In line with these results, the PTEN-specific inhibitor VO-OHpic enhanced AKT phosphorylation (Figure 4C, upper panel) and cell proliferation (Figure 4C, lower panel) even in the presence of PCI in LeTx-treated cells. These results suggest that AKT activation in LeTx-treated cells was likely due to HDAC8-mediated PTEN down-regulation.

We previously showed that LeTx or HDAC8 overexpression leads to H3K27Ac deacetylation in murine macrophages [22,28]. Since the levels of H3K27Ac and H3K27me3 are inversely correlated, and an increase of H3K27me3 leads to down-regulation of PTEN expression [29,30,31,32], we examined both acetylation and methylation levels of H3K27. As expected, LeTx reduced H3K27Ac but induced H3K27me3 (Figure 5A). However, H3K27 methylation peaked in 24 h, which was faster than the rate of deacetylation that gradually occurred over 72 h of LeTx treatments. We then examined the expression levels of HDAC8, and the H3K27-specific methyltransferase enhancer of zeste 2 (EZH2)[33] and demethylase JMJD3 [34,35] in response to LeTx. LeTx had no effects on the expression levels of EZH2, but induced and inhibited, respectively, the expression of HDAC8 and JMJD3 (Figure 5B). To further examine if JMJD3 and EZH2 regulate HDAC8 expression or vice versa, THP-1 cells were treated with the JMJD3 inhibitor GSK-J4 and EZH2 inhibitor EPZ-6438. As expected, H3K27me3 levels were increased by GSK-J4 and decreased by EPZ-6438; however, these inhibitors had no effects on HDAC8 expression (Figure 5C). In addition, none of these inhibitors affected the expression levels of HDAC8 in LeTx-treated cells (Figure 5D, left panel). In contrast, PCI was able to prevent down-regulation of JMJD3 expression (Figure 5D, right panel) and subsequently decreased H3K27me3 levels (Figure 5E). These results suggest that HDAC8 regulates JMJD3 expression and H3K27me3 levels.

2.6. GSK-J4 Induces AKT Activation and Prevents Cell Cycle Arrest even in the Presence of PCI in LeTx-Treated Cells

Living cells in Figure 1A were counted using a hemocytometer after trypan blue staining. MTT (3-(4,5-dimethylthiazol-2-yl)-2,5-diphenyltetrazolium bromide) assay was also used for cell viability assay as described in previous studies [24]. Briefly, THP-1 cells were cultured in 96 well plates and treated with LeTx with or without subsequent treatments with chemical reagents for the time indicated. MTT was then added at a final concentration of 0.5 mg/mL, and incubated at 37 °C for an additional 2 h. Culture media was aspirated and 100 µL of dimethyl sulfoxide was added to dissolve crystals. Optical densities of each well were analyzed at OD570 nm using a microplate reader (Synergy H4 Hybrid Reader; BioTek Instruments Inc., Winooski, VT, USA). The percentage of cell survival was estimated based on OD570 nm of wells by comparing those from non-treated cells.

Data were analyzed using GraphPad Prism 4.0 (GraphPad Software Inc., San Diego, CA, USA). The results are presented as the means ± SD of three independent repeats. Statistical significance was defined as p < 0.05 (*). Otherwise, it was mentioned in the figure legends. 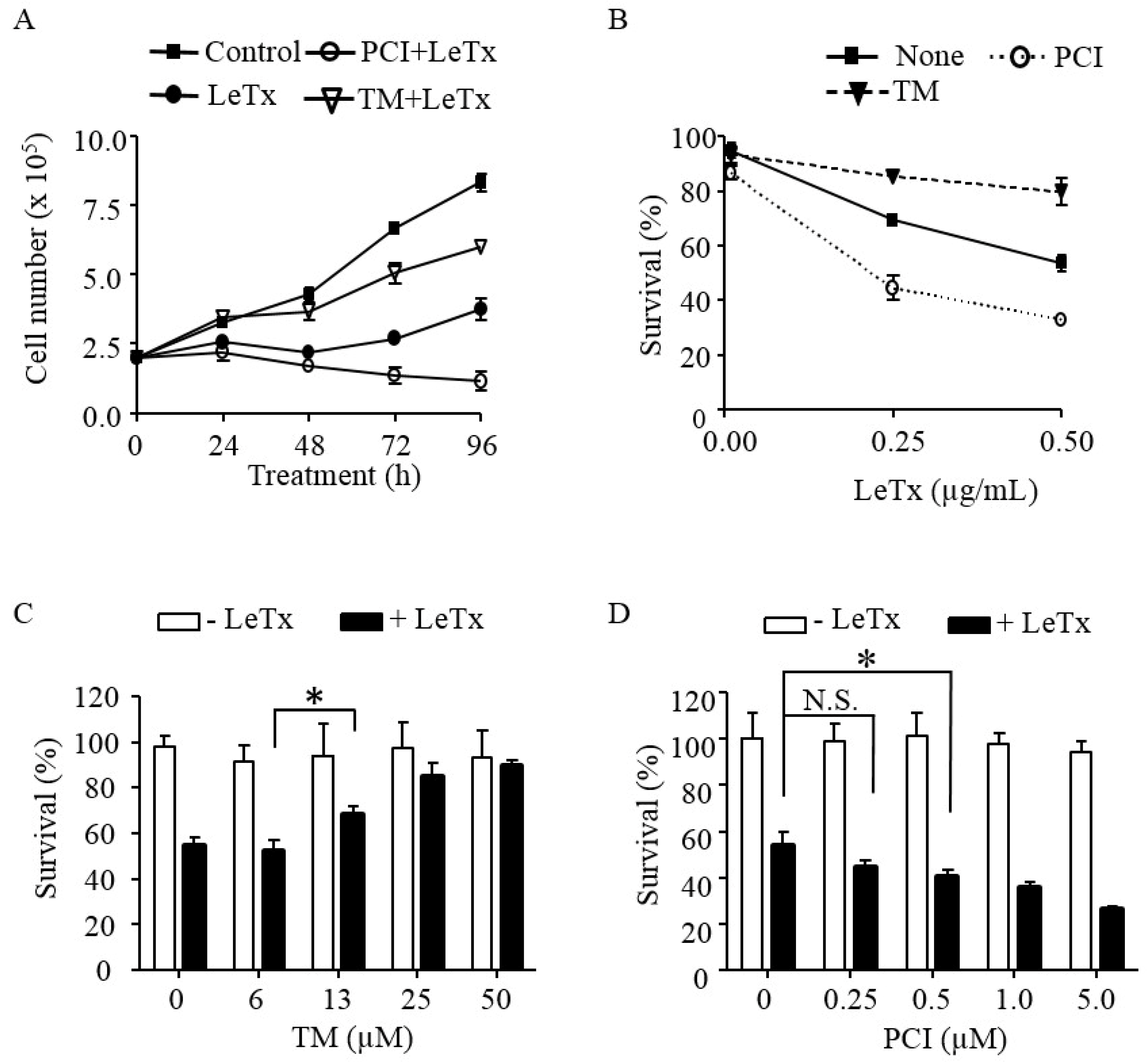