Ants (hymenoptera: Formicidae) have adapted to many different environments and have become some of the most prolific and successful insects. To date, 13,258 ant species have been reported. They have been classified into 333 genera and 17 subfamilies. Except for a few Formicinae, Dolichoderinae, and members of other subfamilies, most ant species have a sting with venom. The venoms are composed of formic acid, alkaloids, hydrocarbons, amines, peptides, and proteins. Unlike the venoms of other animals such as snakes and spiders, ant venoms have seldom been analyzed comprehensively, and their compositions are not yet completely known. In this study, we used both transcriptomic and peptidomic analyses to study the composition of the venom produced by the predatory ant species Odontomachus monticola. The transcriptome analysis yielded 49,639 contigs, of which 92 encoded toxin-like peptides and proteins with 18,106,338 mapped reads. We identified six pilosulin-like peptides by transcriptomic analysis in the venom gland. Further, we found intact pilosulin-like peptide 1 and truncated pilosulin-like peptides 2 and 3 by peptidomic analysis in the venom. Our findings related to ant venom peptides and proteins may lead the way towards development and application of novel pharmaceutical and biopesticidal resources. View Full-Text
Keywords: Odontomachus monticola; venom gland; transcriptome; peptidome; pilosulin-like peptide Odontomachus monticola; venom gland; transcriptome; peptidome; pilosulin-like peptide
►▼ Show Figures 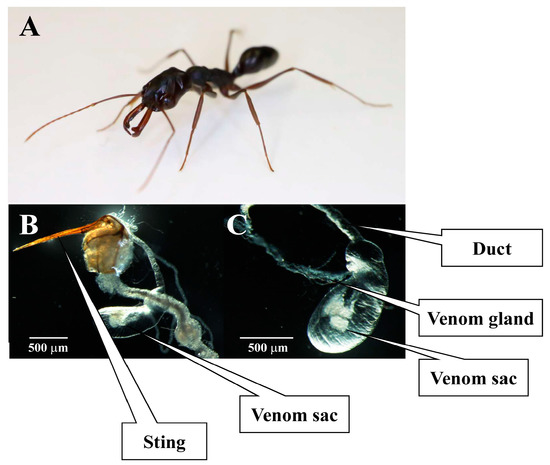