Advances in Biosensors, Chemosensors and Assays for the Determination of Fusarium Mycotoxins
Previous Article in Special Issue

Ellagitannins in Cancer Chemoprevention and Therapy

Epithelial-mesenchymal transition (EMT) plays a key role in tumor progression. The cells undergoing EMT upregulate the expression of cell motility-related proteins and show enhanced migration and invasion. The hallmarks of EMT in cancer cells include changed cell morphology and increased metastatic capabilities in cell migration and invasion. Therefore, prevention of EMT is an important tool for the inhibition of tumor metastasis. A novel preventive therapy is needed, such as treatment of natural dietary substances that are nontoxic to normal human cells, but effective in inhibiting cancer cells. Phytoestrogens, such as genistein, resveratrol, kaempferol and 3,3′-diindolylmethane (DIM), can be raised as possible candidates. They are plant-derived dietary estrogens, which are found in tea, vegetables and fruits, and are known to have various biological efficacies, including chemopreventive activity against cancers. Specifically, these phytoestrogens may induce not only anti-proliferation, apoptosis and cell cycle arrest, but also anti-metastasis by inhibiting the EMT process in various cancer cells. There have been several signaling pathways found to be associated with the induction of the EMT process in cancer cells. Phytoestrogens were demonstrated to have chemopreventive effects on cancer metastasis by inhibiting EMT-associated pathways, such as Notch-1 and TGF-beta signaling. As a result, phytoestrogens can inhibit or reverse the EMT process by upregulating the expression of epithelial phenotypes, including E-cadherin, and downregulating the expression of mesenchymal phenotypes, including N-cadherin, Snail, Slug, and vimentin. In this review, we focused on the important roles of phytoestrogens in inhibiting EMT in many types of cancer and suggested phytoestrogens as prominent alternative compounds to chemotherapy. View Full-Text
Keywords: dietary phytoestrogens; DIM; kaempferol; resveratrol; genistein; epithelial-mesenchymal transition; cancer metastasis dietary phytoestrogens; DIM; kaempferol; resveratrol; genistein; epithelial-mesenchymal transition; cancer metastasis
►▼ Show Figures 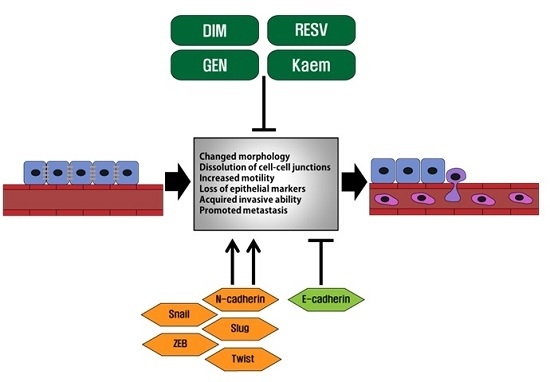