Structural Characterization of Humanized Nanobodies with Neutralizing Activity against the Bordetella pertussis CyaA-Hemolysin: Implications for a Potential Epitope of Toxin-Protective Antigen
Next Article in Special Issue

Mechanisms that Determine the Differential Stability of Stx+ and Stx− Lysogens

Phages 933W, BAA2326, 434, and λ are evolutionarily-related temperate lambdoid phages that infect Escherichia coli. Although these are highly-similar phages, BAA2326 and 933W naturally encode Shiga toxin 2 (Stx+), but phage 434 and λ do not (Stx−). Previous reports suggest that the 933W Stx+ prophage forms less stable lysogens in E. coli than does the Stx− prophages λ, P22, and 434. The higher spontaneous induction frequency of the Stx+ prophage may be correlated with both virulence and dispersion of the Stx2-encoding phage. Here, we examined the hypothesis that lysogen instability is a common feature of Stx+ prophages. We found in both the absence and presence of prophage inducers (DNA damaging agents, salts), the Stx+ prophages induce at higher frequencies than do Stx− prophages. The observed instability of Stx+ prophages does not appear to be the result of any differences in phage development properties between Stx+ and Stx− phages. Our results indicate that differential stability of Stx+ and Stx− prophages results from both RecA-dependent and RecA-independent effects on the intracellular concentration of the respective cI repressors. View Full-Text
Keywords: Shiga toxin; bacteriophage; induction; virulence; RecA Shiga toxin; bacteriophage; induction; virulence; RecA
►▼ Show Figures 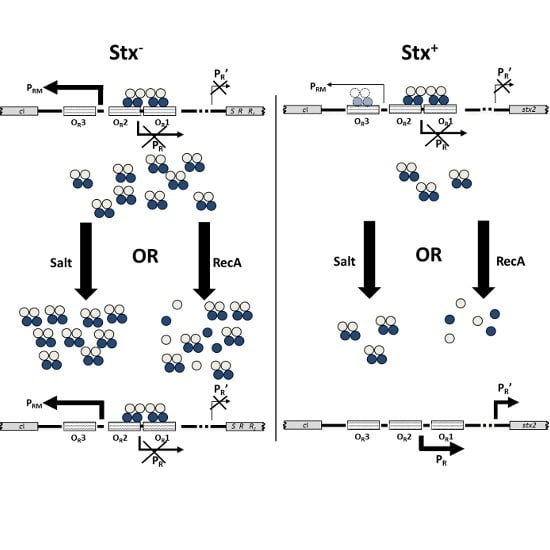