The in vivo neuroprotective effect of PhTx3-4, a spider toxin N-P/Q calcium channel blocker, was studied in a rat model of NMDA-induced injury of the retina. NMDA (N-Methyl-d-Aspartate)-induced retinal injury in rats reduced the b-wave amplitude by 62% ± 3.6%, indicating the severity of the insult. PhTx3-4 treatment increased the amplitude of the b-wave, which was almost equivalent to the control retinas that were not submitted to injury. The PhTx3-4 functional protection of the retinas recorded on the ERG also was observed in the neuroprotection of retinal cells. NMDA-induced injury reduced live cells in the retina layers and the highest reduction, 84%, was in the ganglion cell layer. Notably, PhTx3-4 treatment caused a remarkable reduction of dead cells in the retina layers, and the highest neuroprotective effect was in the ganglion cells layer. NMDA-induced cytotoxicity of the retina increased the release of glutamate, reactive oxygen species (ROS) production and oxidative stress. PhTx3-4 treatment reduced glutamate release, ROS production and oxidative stress measured by malondialdehyde. Thus, we presented for the first time evidence of in vivo neuroprotection from NMDA-induced retinal injury by PhTx3-4 (-ctenitoxin-Pn3a), a spider toxin that blocks N-P/Q calcium channels.
Keywords: Neuroprotection; retina; phoneutria nigriventer; spider toxins; PhTx3-4 Neuroprotection; retina; phoneutria nigriventer; spider toxins; PhTx3-4

N-Methyl-d-Aspartate (NMDA) basically induces excitotoxicity contributing to damage in stroke and neurodegenerative retinopathies, leading to blindness, such as diabetic retinopathy, glaucoma, retinal vascular occlusion, optic nerve neuropathy, and retinopathy of prematurity [1,2].
The etiology and pathogenesis of these neurodegenerative diseases are different; however, at the cellular and molecular level, retinal injury is present in all of them [3]. The excitotoxicity injury consists of a self-reinforcing destructive cascade involving neuronal depolarization, calcium influx and oxidative stress that are initiated by energy failure and increased glutamatergic stimulation [4].
The electroretinogram (ERG) is a composite signal generated by the retina in response to light stimuli. The b-wave of the ERG is a particularly sensitive index of retinal injury of the retina, and ERG can be used to evaluate the efficacy of therapeutic drugs.
Glutamate is the major excitatory retinal neurotransmitter and is released in vivo by photoreceptors, bipolar cells and ganglion cells [5]. In the retinal injury, excessive amounts of glutamate are released and lead to neuronal cell toxicity [6]. Experimentally, in adult rats, intravitreal administration of glutamate causes retinal toxicity [7]. Evidences indicates that glutamate initiates neurotoxic cascades by several different mechanisms, most of which depend on [Ca2+]i increases. The activation of NMDA receptors depolarizes neurons and subsequently activates voltage-dependent Ca2+ channels (VDCCs) [8]. The net result of this process is an increase in the cytoplasmic calcium concentration, which activates proteases, nucleases, phospholipases, nitric oxide synthase and other degradative enzymes. This activation leads to an increase in free radicals production and subsequent cell death [9,10]. Several studies reported that ROS, including superoxide radicals, induces oxidative stress in many neurodegenerative diseases, including optic neuropathies.
An excessive influx of Ca2+ that causes an intracellular overload of Ca2+ in neurons is a crucial step for excitotoxicity, causing a large release of glutamate and enhanced production of ROS. Ca2+ overload, glutamate release and ROS formation are the major pathophysiological processes that contribute to retina injury. Therefore, one method to prevent the harmful effects of injury might be to block the excessive influx of calcium using calcium channel blockers.
PhTx3-4 is a toxin purified from the spider Phoneutria nigriventer venom that blocks N and P/Q voltage gated calcium channels with a similar potency [11,12]. R-type currents can also be inhibited by PhTx3-4, but with a lower potency [11]. Multiple binding sites appear to be involved in the PhTx3-4 action in the central nervous system. PhTx3-4 inhibits calcium influx [13,14] and exocytosis in synaptosomes by targeting P/Q calcium channels in nerve endings and glutamate release in synaptosomes [15]. Previously, we have shown that PhTx3-4 reduced the glutamate content and cell death of retinal ischemic slices submitted to oxygen-deprived low glucose medium [16]. The aim of the present work was to study the in vivo intravitreal injection of the purified toxin, PhTx3-4, in an in vivo model of retinal injury induced by NMDA injection.

2.2. PhTx3-4 Causes Cell Protection of NMDA-Induced Injury of the Retina

2.4. PhTx3.4 Treatment Reduces ROS in NMDA-Induced Injury of the Retinas

An enhanced production of ROS is suggested to be one of the major pathophysiological processes that contribute to retinal damage. ROS production induced by NMDA-induced injury of the retina increased by 4.0-fold in the aqueous humor of the retina, Figure 5. The ROS control value for the retinas without injury was 28 ± 5 u.a/µL (arbitrary unit/ µL) and increased to 115 ± 8 u.a/µL in the NMDA-induced injury condition (p < 0.01). The PhTx3-4 treatment reduced the ROS production to 56 ± 14 u.a/µL, a value not different from the control retinas without injury (p > 0.05).

Male Wistar rats (180–220g) were used in this study. Five rats were used in each experiment. All of the experiments were performed in accordance with the current guidelines for the care of laboratory animals. The Ethics Committee of the Federal University of Minas Gerais, CEUA, authorized the studies (Protocol number 347/2012), in 14 March 2013. We followed the guidelines for the Use and Care of Animals for Research issued by the NIH.

PhTx3-4 was purified using a combination of gel filtration, reverse-phase FPLC (GE, MN, USA) ion exchange HPLC(Shimadzu, Tokyo, Japan), as described previously. Pro-Rpc columns, reverse phase high-performance liquid chromatography (HPLC) on Vydac C18, and ion exchange HPLC on cationic and anionic columns [49,50]. By mass spectroscopy analysis, PhTx3-4 has a molecular weight of 8449 DA, and the amino acid sequence is: SCINVGDFCDGKKDCCQCDRDNAFCSCSVIFGYKTNCRCEVGTTATSYGICNAKHKCGRQTTCTKPCLSKRCRRNHG, accession NCBI P81790. The predicted mass of the sequence of PhTx3-4 is 8419 and the mass spectroscopy analysis is 8449 DA. The difference may be due to the fact that when a proline residue of peptide is not stabilized by disulfide bridges, artificial components are generated by the mass spectrometer conditions, due to the cleavage of the peptide bond at the proline position [51]. The snail toxin ω-conotoxin MVIIC was obtained from Peptides, Osaka, Japan. All other chemicals were of analytical grade.

Retinal injury of the retinas was induced by intravitreal injection of 200 nmol of NMDA in a volume of 5 µL [52]. The injection was performed with a 10 µL Hamilton micro syringe inserted 1 mm below the corneal limbus through the infero-temporal sclera. Rats were under anesthesia in a chamber with 4% halothane in 25% oxygen.
Two hundred nanomolar of NMDA were injected into the vitreous cavity of the right (injury group). Contralateral eye was treated with co-administration of PhTx3-4 (90 pmol/eye) and NMDA (200 nM) or with MVIIC (30 pmol/eye) + NMDA (200 nM). In other rats, 5 µL of saline was injected in one eye (control), and 200 nmol NMDA was injected in the contralateral eye (injury group). At 7 days after the intravitreal injection of NMDA, the eyes were evaluated.

After 7 days of the NMDA-induced injury, electroretinogram (ERG) recordings of the retina in control (saline treatment), injury, injury/ PhTx3-4 and injury/MVIIC treated were performed. General anesthesia was induced by an intraperitoneal injection of a mixture of ketamine (50 mg/kg) and xylazine (8 mg/kg). The pupils were dilated with a mixture of tropic amide (Mydriaticum; Alcon, São Paulo, Brazil) and phenylephrine (Allergan, São Paulo, Brazil). The anesthetized rats were placed in a ganzfeld bowl on a sliding table (Electrophysiological diagnostic systems-Professional Series P227f, Roland Consult, Brandenburg, Germany). The body temperature was maintained at 38 °C by means of a heating pad and monitored rectally. Silver needle electrodes served as the reference (forehead) and ground (tail), while gold wire rings were used as the active electrodes. An ophthalmic 2% methylcellulose solution (Mediphacos, Belo Horizonte, Brazil) was applied to the cornea to keep it hydrated for the electrical conductance. In previous photopic ERG sessions, the rats were subjected to adapt to the light background of 25 cd.s/m2. cd.s/m2 (candela.seconds/squared methods) is the unit for luminous intensity of the international system of units. The intensity of the light responses was 0.01, 0.1, 0.3, 1, 3, and 10 cd.s/m2. The ERG was used to measure the amplitude of the b-wave, and the results were presented as the mean compared with the average values of all of the animals [53].

To analyze the cell viability, the rats were killed by decapitation, and the retinas were removed and double stained with 6 µmol/L ethidium homodimer-AM and 300 nM DAPI for 30 min. Then, they were washed for 15 min in 2 mL of PBS (Phosphate Buffer Saline), 95% O2/5% CO2 at room temperature. Cells nuclei showed blue fluorescence of DAPI (4,6-diamidino-2-phenylindole) and dead cells were indicated by the red fluorescence of ethidium homodimer. The images were acquired using an Axiovert Zeiss 200 M (Zeiss, Oberkochen, Germany) using the ApoTome (Zeiss, Oberkochen, Germany). The objectives were used without immersion at a 20× magnification. Imaging analysis was performed as previously described [54]. The images showing specific red-fluorescent nucleic acid staining of the dead cells were used to quantify the NMDA-induced neurotoxicity. We used the Image J software (1.6.0, National Institute of Mental Health, Maryland, USA, 2015) to combine consecutive optical sections from a Z-series to create image reconstructions. To improve the images for the quantitative analysis, they were processed using the median filter. In the current approach, we define the nucleus as connected pixels that were above a threshold. This threshold was calculated using the image histogram, and pixels below the threshold were set to 0.

The retinas were fixed in 4% formaldehyde in 10 mM of phosphate-buffered saline and rinsed with phosphate-buffered saline. Then, they were stained with hematoxylin-eosin to assess the NMDA damage on the cells of the ganglion cell layer (GCL), inner nuclear layer (ICL), and outer nuclear layer (OCL). Conventional microscopy using Olympus® BH2 microscope (Olympus, Tokyo, Japan), 40× objective and software Image J. The live cells were analyzed in 20 fields per retinal slice. The results were expressed as the mean of the live cells per square millimeter.

The glutamate content of the vitreous humor of the control, NMDA injury and NMDA injury PhTx3-4 treated eyes were determined by monitoring the increase in the NADPH+ (1.0 mM) fluorescence in the presence of glutamate dehydrogenase (50 units), as previously described [55]. The excitation wavelength was set to 340–360 nm, and the emission wavelength was set to 450 nm in a Shimadzu spectrofluorometer (Kyoto, Japan).

The ROS measurements of the vitreous humor were performed by using DCF-DA, 2′,7′-dichlorofluorescein diacetate (Sigma-Aldrich (St. Louis, MO, USA) a fluorescent probe for the assay [56]. Briefly, 2 µL of the vitreous humor was incubated with 100 µL of 125-µM DCFH-DA stock solution at 37 °C for 30 min and protected from light. The formation of the oxidized fluorescent derivative (DCF) was monitored at excitation and emission wavelengths of 488 and 525 nm, respectively, in a fluorescent plate reader (PerkinElmer, Waltham, MA, USA).

Lipid peroxidation was determined by measuring the malondialdehyde (MDA) content in the retina homogenates [57]. Malondialdehyde is the principal and most studied product of polyunsaturated fatty acid peroxidation. Briefly, thiobarbituric acidic reacts with MDA at high temperatures (95–100 °C), and this reaction product was measured at 532 nm using a spectrophotometer (Ultrospec 2100, Amersham, Piscataway, NJ, USA). The results were normalized by the protein content and expressed as the percentage of increase of MDA relative to their respective controls. Measurements of MDA were performed 7 days after NMDA injection.

The experiments of cell viability and biochemical tests were analyzed with a one-way ANOVA followed by the Newman Keuls test. The results were expressed as the mean ± SEM from at least five independent experiments. p < 0.05 was considered statistically significant. 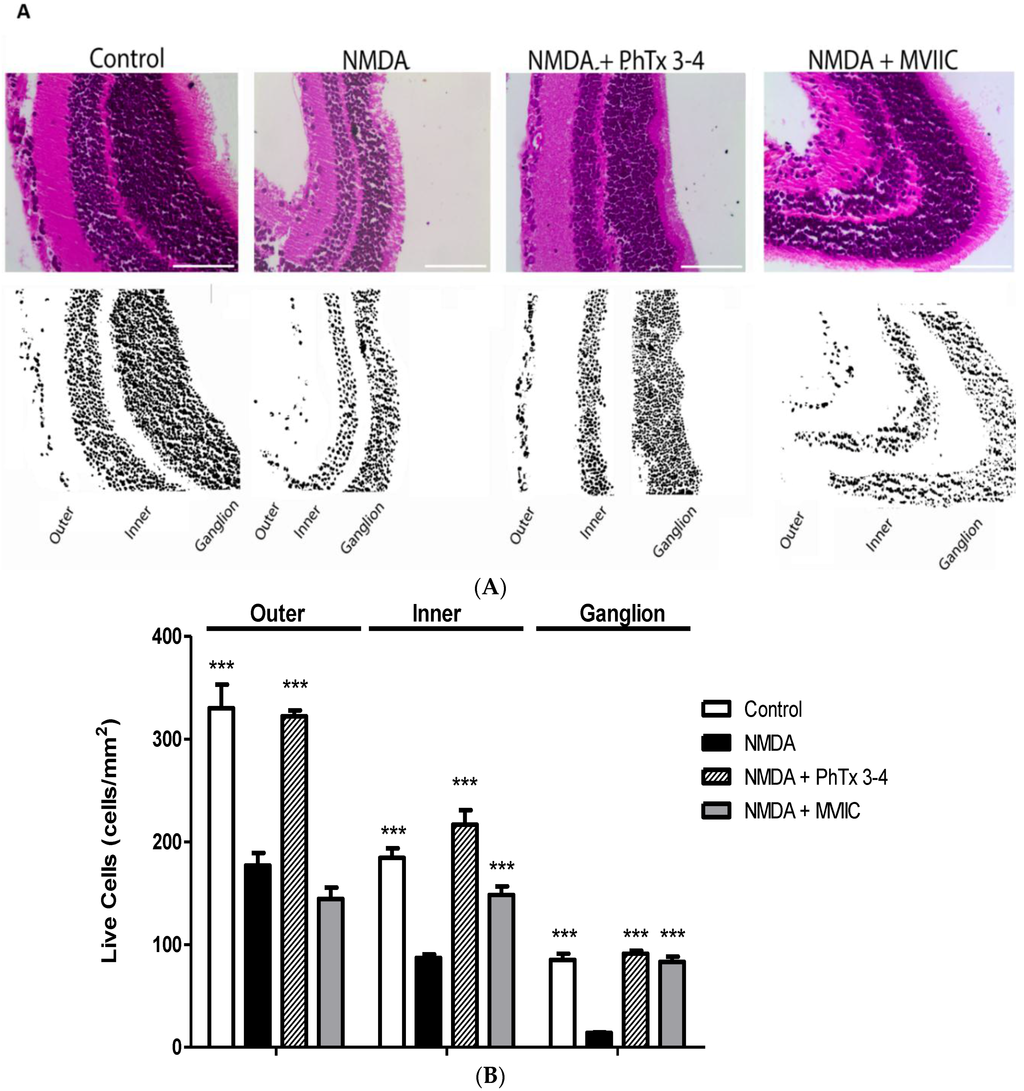 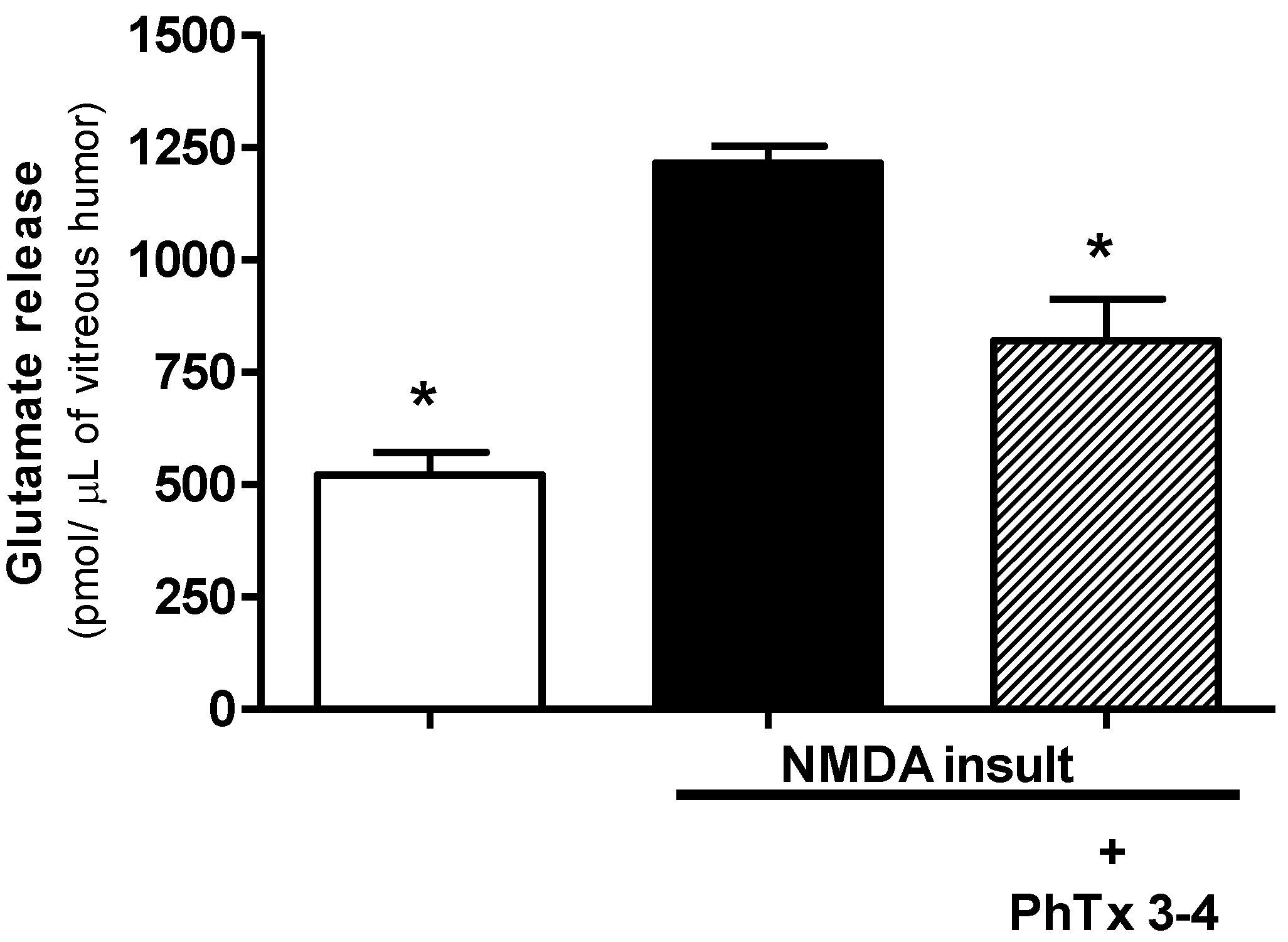 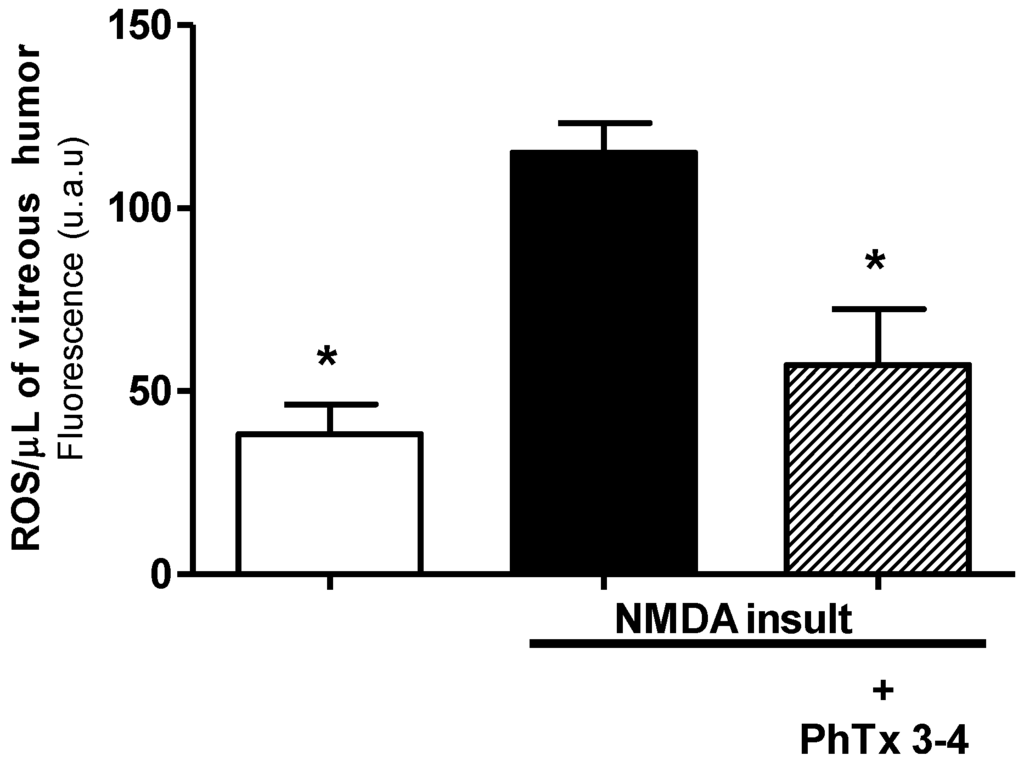 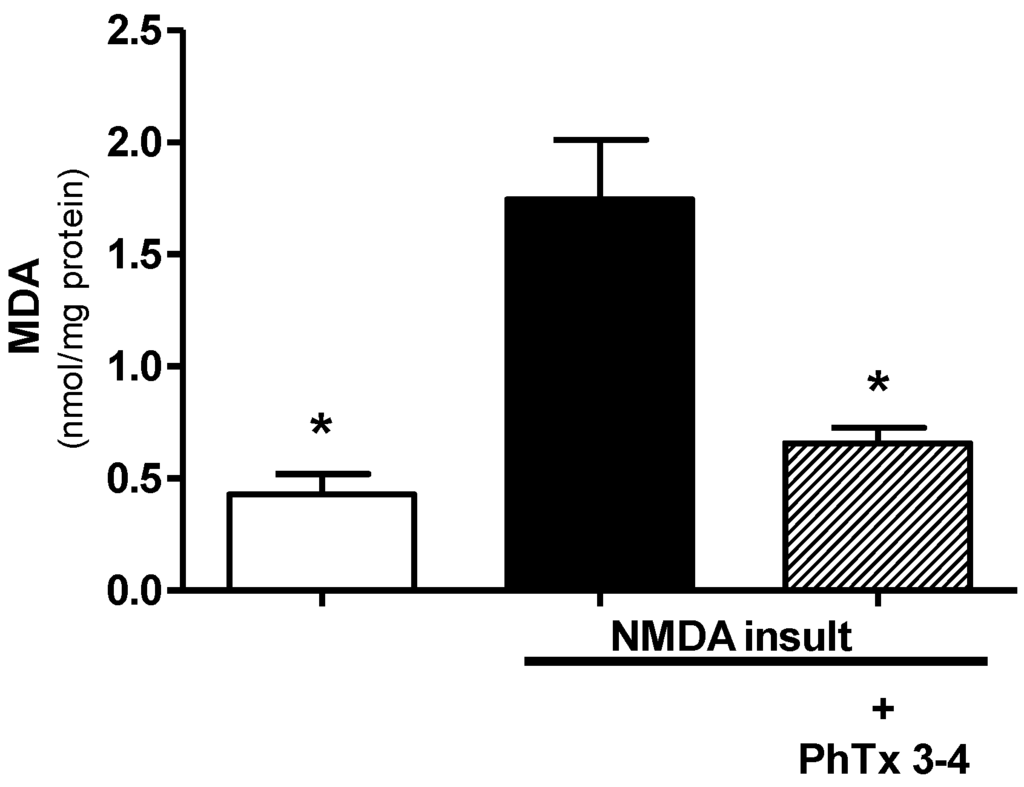