An Introduction to the Toxins Special Issue on “Bee and Wasp Venoms: Biological Characteristics and Therapeutic Application”
Next Article in Special Issue

Among the toxin family of bacterial superantigens, the six members of the enterotoxin gene cluster (egc) seem to have unusual characteristics. They are present in the majority of Staphylococcus aureus strains, but their role in disease remains uncertain. We assessed secretion levels, immunogenicity, and toxicity of native and recombinant egc proteins. After having developed enzyme-linked immunosorbent assays, we found different quantities of egc proteins secreted by bacterial isolates. Supernatants induced proliferation of human peripheral blood mononuclear cells. However, purified recombinant egc proteins were shown to have differing superantigenicity potentials. Immunization with identical amounts of all members of egc, and the prominent toxic agent SEB, resulted in neutralizing antisera. Two egc proteins, SEI and SElN, were found to play a predominant role within the cluster. Both displayed the highest potential to activate blood cells, and were essential to be neutralized in supernatants. The application of a supernatant of a strain bearing only egc was sufficient for a lethal outcome in a rabbit model. Again, neutralization of SEI and SElN led to the survival of all tested animals. Finally, nanogram amounts of purified rSEI and rSElN led to lethality in vivo, pointing out the importance of both as virulence determinants among egc superantigens. View Full-Text
Keywords: Staphylococcus; enterotoxin gene cluster; immunogenicity; toxicity Staphylococcus; enterotoxin gene cluster; immunogenicity; toxicity
►▼ Show Figures 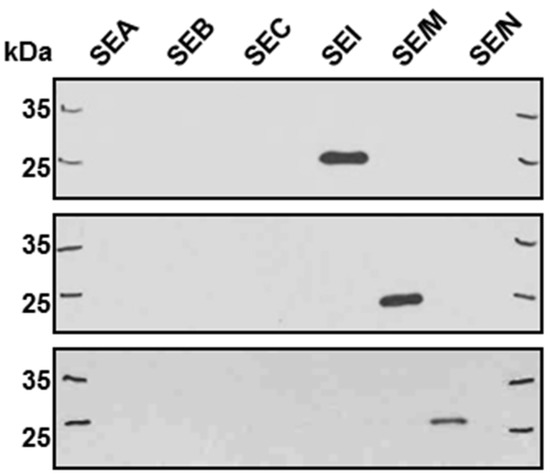