:
This study aims to determine the most efficacious dose of Botulinum neurotoxin type A (BoNT-A) in reducing sialorrhea in Asian adults with neurological diseases. A prospective, double-blind randomized controlled trial was conducted over 24 weeks. Thirty patients with significant sialorrhea were randomly assigned to receive a BoNT-A (Dysport®) injection into the submandibular and the parotid glands bilaterally via an ultrasound guidance. The total dose given per patient was either BoNT-A injection of (i) 50 U; (ii) 100 U; or (iii) 200 U. The primary outcome was the amount of saliva reduction, measured by the differential weight (wet versus dry) of intraoral dental gauze at baseline and at 2, 6, 12, and 24 weeks after injection. The secondary outcome was the subjective report of drooling using the Drooling Frequency and Severity Scale (DFS). Saliva reduction was observed in response to all BoNT-A doses in 17 patients who completed the assessments. Although no statistically significant difference among the doses was found, the measured reduction was greater in groups that received higher doses (100 U and 200 U). The group receiving 200 U of Dysport® showed the greatest reduction of saliva until 24 weeks and reported the most significant improvement in the DFS score.
Keywords:
botulinum toxin type A; neuromuscular agents; sialorrhea; salivary gland diseases; nervous system diseases; stroke 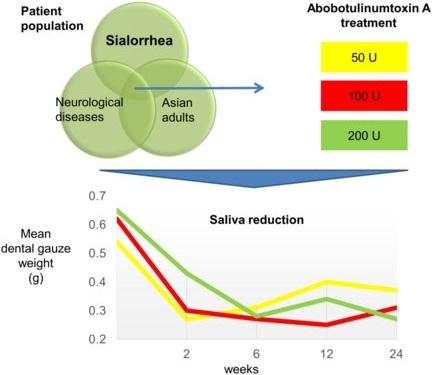 Sialorrhea is a well-recognized disabling symptom associated with 10% of chronic neurological diseases [1,2]. Significant sialorrhea can lead to social and functional impairments, including social embarrassment and isolation, oral and skin fungal infections, aspiration, skin maceration, halitosis, and dehydration [1,2,3,4,5]. Both non-invasive interventions (e.g., oral medications) and invasive interventions (e.g., surgery) are currently offered as treatments for the management of sialorrhea. Among these interventions, botulinum toxin-A injections (BoNT-A) to the salivary glands are considered minimally invasive and have been introduced as a non-permanent treatment for sialorrhea [6]. Based on the current level of evidence, both abobotulinumtoxin A (Dysport®, Paris, France) and onabotulinumtoxin A (Botox®, Irvine, CA, USA) are considered effective for the treatment of sialorrhea with limited side effects [7].
A previous meta-analysis study has shown the efficacy of BoNT-A compared with placebo in reducing sialorrhea in various neurological diseases such as Parkinson’s disease (PD), amyotrophic lateral sclerosis, and cerebral palsy, but the dose and preparation of BoNT-A has varied across studies [8]. The total dose of Botox® used in those studies ranged from 40 U to 100 U. On the other hand, the total dose of Dysport® used in studies for sialorrhea treatment in adult patients has ranged from 250 U to 450 U [9,10]. Based on a dosing conversion of 1:3 from Botox® to Dysport® [11], the total doses of Dysport® injected were slightly higher. The 2010 International Consensus Statement recommended a Dysport® dose between 15 U to 75 U for each submandibular and parotid gland, resulting in a total minimum dose of 60 U and a total maximum dose of 300 U. However, this consensus statement was based primarily on studies that included both pediatric and adult populations with sialorrhea [12].
To the best of our knowledge, no study has directly compared the efficacy and safety profile of different doses of BoNT-A in adult patients with sialorrhea. The current dosage recommendations are based on research conducted in Western countries; the safety profile may be different among Asian patients. Asian populations are generally physically smaller in size and a previous survey has shown that lower BoNT-A doses were commonly used in Asian countries, especially in BoNT-A intramuscular injections [13]. There are also country-specific recommendations for the total doses of BoNT-A used; found within the summary of product characteristics or prescribing information, especially for Dysport®. Thus, we conducted a study comparing different doses of BoNT-A in a cohort of adult neurological patients with sialorrhea to determine the lowest and safest effective dose of BoNT-A in our population.

Between September 2010 and February 2014, 41 patients were identified for the study. Eleven patients were excluded (four did not meet the inclusion criteria and seven refused to participate). Thirty patients were eligible and agreed to participate in the study as shown in Table 1 (20 males, 10 females; mean age 56 ± 16.1 years). Of these patients, 19 patients had suffered from a stroke; four patients had a traumatic brain injury; two patients had a motor neuron disease and PD, respectively; and one patient each had encephalitis, cerebral palsy, and a cerebellopontine angle tumor. Out of 19 stroke patients recruited in this study, 12 presented with ischemic strokes and 7 presented with hemorrhagic strokes. Ten stroke patients were on percutaneous endoscopic gastrostomy tube feeding and 12 had cognitive impairment. All patients in the study presented with sialorrhea for more than six months in duration. The patients were randomized to receive 50 U (n = 10), 100 U (n = 10), or 200 U (n = 10) of BoNT-A.
Table 1. The demographics of 30 patients recruited at baseline and the doses of botulinum toxin type A (BoNT-A) allocated. Patients No. 1–17 completed all assessments up to 24 weeks and were included in the analysis of outcome measures.
Note: CP = cerebral palsy; TBI = traumatic brain injury; MND = motor neuron disease; CPA = cerebellopontine angle, PD = Parkinson’s disease.

Figure 1 shows the flowchart describing adult patients with neurological diseases participating in the study and the dropouts. There were 10 patients in every group at the start of the study. One patient who received 50 U of BoNT-A died before the first post-injection assessment and therefore, 29 patients were included in the “intent-to-treat” analysis. For the “per-protocol” analysis, only 17 patients completed the follow-up assessments at the end of week 24 and included in the analysis. Two patients who died before the end of the study period and 11 patients who were lost to follow-up were excluded. Patients failed to follow-up because of caregiver’s inability to bring them to the hospital (n = 4), progression of neurological disease (n = 2), and transportation problems (n = 5). One traumatic brain injury patient died from pneumonia two weeks after the injection and one stroke patient died from status epilepticus 12 weeks after enrolment in the study. Both deaths were confirmed to be unrelated to the BoNT-A treatment. No patient dropped out of the study due to treatment side effects. The lowest BoNT-A dose group (50 U) had the highest dropout rate (n = 5).

The results from the “intent-to-treat” and “per-protocol” analyses are discussed together because similar findings were found in both analyses. Figure 2 shows the comparative mean dental gauze weights for 17 patients who completed the study. At 2 weeks post-injection, sialorrhea was reduced in all three BoNT-A dose groups, as seen from the lower mean values of the differential weight between wet and dry gauze compared with baseline.

Side effect data were gathered from all contactable patients, including those who dropped out of the study. The only reported toxin-related side effect was the modification of saliva thickness, which led to the transient viscous saliva observed in one patient. The injection-related adverse events were negligible. Two patients reported pain at the injection site during the procedure. None of the treated patients reported xerostomia, dysphagia, dental problems, facial weakness, or aspiration after the BoNT-A injection.

Statistical analysis was performed using the Statistical Package for the Social Sciences software version 17.0 (SPSS 17.0). Repeated measures analysis of variance (ANOVA) tests were used to assess differences in the mean dental roll gauze weight among the three dose groups followed by a post-hoc test (Bonferroni Test) for any significant results. The level of significance was set at p < 0.05. Data normality was tested by means of the Shapiro-Wilk W-test, and non-parametric statistics were used for variables that were not normally distributed.

This was an investigator-initiated study sponsored by Ipsen (Ipsen Pharma, Boulogne Billancourt, France). Ipsen Ltd., Slough, UK, provided the botulinum toxin type A (Dysport®) free of charge. We thank the staff at the department and the Clinical Research Center of Ministry of Health, Malaysia for their assistance with this project.

The authors received no financial support for authorship, and/or publication of this article. The sponsor (Ipsen Pharma) provided study drugs free of charge, support for investigator meetings, and patient education program during the study period.
All investigators have no competing interests. The investigators had full access to the data, and the final responsibility for the decision to submit the manuscript for publication, central statistical support, and data analysis.