The Effects of Low Doses of Two Fusarium Toxins, Zearalenone and Deoxynivalenol, on the Pig Jejunum. A Light and Electron Microscopic Study
Previous Article in Journal

Effects of Mycotoxins on Mucosal Microbial Infection and Related Pathogenesis

Growing evidence has revealed the deleterious influence of environmental and food contaminants on puberty onset and development in both animals and children, provoking an increasing health concern. T-2 toxin, a naturally-produced Type A trichothecene mycotoxin which is frequently found in cereal grains and products intended for human and animal consumption, has been shown to impair the reproduction and development in animals. Nevertheless, whether this trichothecene mycotoxin can disturb the onset of puberty in females remains unclear. To clarify this point, infantile female rats were given a daily intragastric administration of vehicle or 187.5 μg/kg body weight of T-2 toxin for five consecutive days from postnatal day 15 to 19, and the effects on puberty onset were evaluated in the present study. The results revealed that the days of vaginal opening, first dioestrus, and first estrus in regular estrous cycle were delayed following prepubertal exposure to T-2 toxin. The relative weights of reproductive organs uterus, ovaries, and vagina, and the incidence of corpora lutea were all diminished in T-2 toxin-treated rats. Serum levels of gonadotropins luteinizing hormone, follicle-stimulating hormone, and estradiol were also reduced by T-2 toxin treatment. The mRNA expressions of hypothalamic gonadotropin-releasing hormone (GnRH) and pituitary GnRH receptor displayed significant reductions following exposure to T-2 toxin, which were consistent with the changes of serum gonadotropins, delayed reproductive organ development, and delayed vaginal opening. In conclusion, the present study reveals that prepubertal exposure to T-2 toxin delays the onset of puberty in immature female rats, probably by the mechanism of disturbance of hypothalamic-pituitary-gonadal (HPG) axis function. Considering the vulnerability of developmental children to food contaminants and the relative high level of dietary intake of T-2 toxin in children, we think the findings of the present study provide valuable information for the health risk assessment in children. View Full-Text
Keywords: T-2 toxin; female rat; puberty onset; delay; HPG axis; GnRH T-2 toxin; female rat; puberty onset; delay; HPG axis; GnRH
►▼ Show Figures 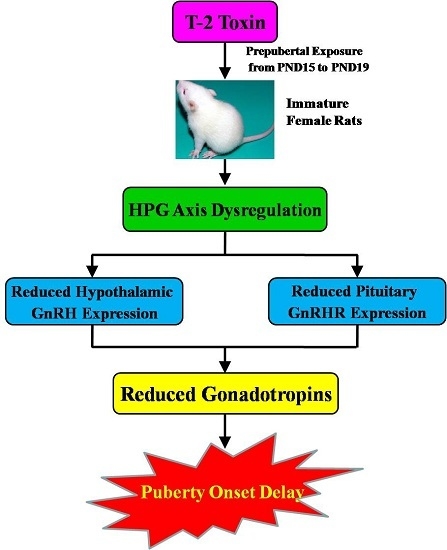