Lengthening of Insect Development on Bt Zone Results in Adult Emergence Asynchrony: Does It Influence the Effectiveness of the High Dose/Refuge Zone Strategy?
Next Article in Special Issue

:
The oral adsorbent AST-120 is composed of spherical carbon particles and has an adsorption ability for certain small-molecular-weight compounds that accumulate in patients with chronic kidney disease (CKD). So far, very few compounds are known to be adsorbed by AST-120 in vivo. To examine the effect of AST-120 in vivo, we comprehensively evaluated the plasma concentrations of 146 compounds (61 anions and 85 cations) in CKD model rats, with or without four weeks of treatment with AST-120. By capillary electrophoresis with mass spectrometry, we identified 6 anions and 17 cations that were significantly decreased by AST-120 treatment. In contrast, we also identified 2 cations that were significantly increased by AST-120. Among them, 4 anions, apart from indoxyl sulfate and hippurate, and 19 cations were newly identified in this study. The plasma levels of N-acetyl-neuraminate, 4-pyridoxate, 4-oxopentanoate, glycine, γ-guanidinobutyrate, N-γ-ethylglutamine, allantoin, cytosine, 5-methylcytosine and imidazole-4-acetate were significantly increased in the CKD model compared with the sham-operated group, and were significantly decreased by AST-120 treatment. Therefore, these 10 compounds could be added as uremic compounds that indicate the effect of AST-120 treatment. This study provides useful information not only for identifying the indicators of AST-120, but also for clarifying changes in the metabolic profile by AST-120 treatment in the clinical setting.
Keywords:
AST-120; uremic toxin; CE-MS

Wistar rats were obtained from Charles River (Kanagawa, Japan). At the age of nine weeks, 5/6 nephrectomy or sham operation was performed as previously reported [11]. Ten weeks after the operation, systolic blood pressure (SBP), body weight (BW), plasma creatinine (Cr) and creatinine clearance (Ccr) were measured, and then 5/6Nx rats were randomized into two groups, a control group (n = 13) and the AST-120 group (n = 12). The AST-120 group was fed powder chow (CE-2, CLEA Japan, Inc., Tokyo, Japan) containing 8% (w/w) AST-120 for four weeks, whereas the sham-operated (n = 3) and control (n = 13) groups were fed powder chow alone. After four weeks of treatment, SBP, BW, Cr and Ccr were measured again, the rats were then sacrificed and the plasma was subjected to CE-MS analysis. This animal experiment was approved by the Center for Laboratory Animal Research, Tohoku University.

There were no significant differences in the total amounts of food intake (data not shown), SBP, BW, Cr and Ccr between the control and AST-120 groups throughout the experiment (Table 1). An AST-120 rat died of uremia at three weeks. SBP and Cr were significantly lower and Ccr was significantly higher in the sham-operated group than in both the control and AST-120 groups at four weeks of treatment.
Using CE-MS analysis, 220 anionic and 300 cationic compounds whose molecular weights ranged from 71.1 to 784.2 m/z were analyzed and quantified. Among them, 146 compounds (61 anions and 85 cations) were detected (Supplementary Tables S1 and S2). The other compounds (159 anions and 215 cations) were below the detection limit in all samples and were excluded for the analysis.
Table 1. Parameters before and four weeks after administration of AST-120 to chronic kidney disease (CKD) rats. ** p < 0.01 vs. control at four weeks. 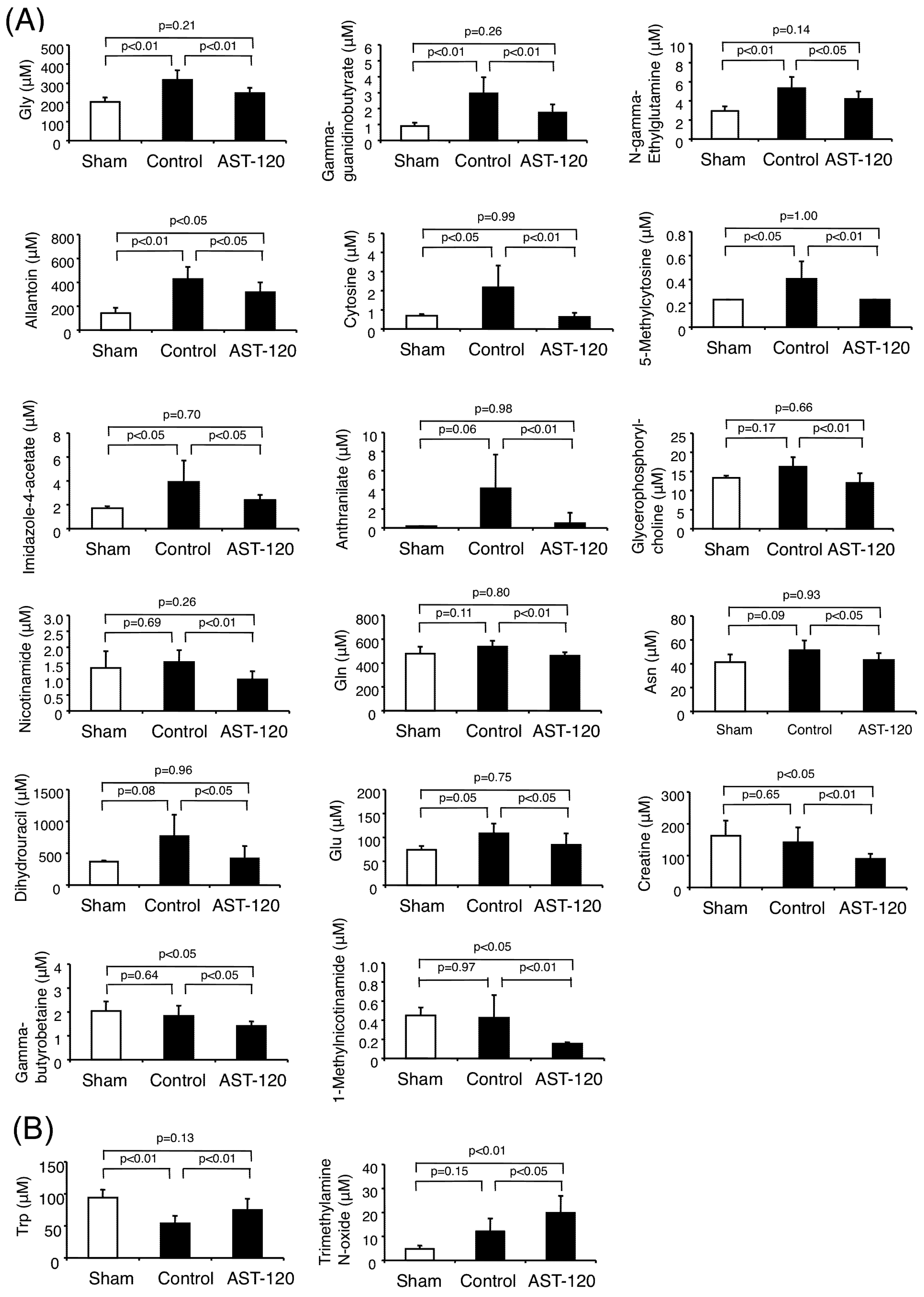 In this study, using the CE-MS method [11,12,13,14,18], we comprehensively analyzed over 500 compounds and quantified 146 compounds (Supplementary Tables S1 and S2). We identified 25 compounds (6 anions and 19 cations) whose plasma concentrations were significantly changed by AST-120 treatment in 5/6Nx rats (the results are summarized in Figure 1 and Table 2). Among them, the plasma levels of 11 compounds were significantly increased in the 5/6Nx rats compared with the sham-operated rats, suggesting that they were uremic compounds whose plasma concentrations were significantly decreased by AST-120 treatment (B and D groups in Figure 1). It has been reported that 4-oxopentanoate, hippurate, allantoin and cytosine also accumulate in CKD patients [13,19,20], suggesting that these four compounds may be common uremic compounds for both rats and human. On the other hand, among the compounds whose plasma concentrations were not changed by 5/6 nephrectomy in this experiment, some have been reported to be accumulated in 5/6Nx rats or CKD patients (Table 2). For example, although it is well known that indoxyl sulfate accumulates in both 5/6Nx rats and CKD patients [8,19], there was no significant difference in the plasma indoxyl sulfate concentration between the sham-operated and control groups in this study. Probably, this was because of the small number (n = 3) of sham-operated rats. Other than indoxyl sulfate, asparagine, creatine and γ-butyrobetaine have been reported to be accumulated in CKD patients [13,19]. Therefore, these compounds might be included among the uremic compounds that are indicators of the effects of AST-120. On the other hand, N-acetylneuraminate, 4-pyridoxate, N-γ-ethylglutamine, 5-methylcytosine and imidazole-4-acetate were not detected in CKD patients in our previous study [13]. Therefore, they may not be uremic compounds in humans. In addition to these, o-hydroxybenzoate, anthranilate, nicotinamide and dihydrouracil were not detected in CKD patients. These discrepancies between 5/6Nx rats and CKD patients may reflect differences in their metabolic profiles. Further studies are needed to clarify the differences in the uremic compounds and the effect of AST-120 between rats and human.
The plasma levels of creatine, γ-butyrobetaine and 1-methylnicotinamide were significantly lower in the AST-120 group than in the sham-operated group, which suggests that AST-120 may cause a shortage of these compounds. Among them, 1-methylnicotinamide is known as the major metabolite of nicotinamide. Because the plasma level of nicotinamide was also decreased by AST-120, the decrease of 1-methylnicotinamide may be caused by the decrease of nicotinamide. It has been reported that 1-methylnicotinamide and nicotinamide exert anti-inflammatory effects in vivo [21], and it has been also reported that 1-methylnicotinamide has anti-thrombotic activity [22] and anti-diabetic effects [23]. Therefore, the decreases of both compounds may have a bad influence on the immune system, cardiovascular system or glucose metabolism in rats. However, nicotinamide was not detected in human serum in our previous study [13]. This may be a result of differences in the profile of nicotinamide metabolism or distribution in the body between rats and human. Further studies are needed to clarify the effect of AST-120 on such compounds in human.
Although AST-120 is an adsorbent, it is unknown whether these compounds are directly adsorbed by AST-120. It is well known that the plasma indoxyl sulfate concentration is decreased by AST-120 treatment because, not indoxyl sulfate itself, but its precursor indole is adsorbed by AST-120 in the intestines. Plasma hippurate concentration is also decreased by AST-120 through adsorbing its precursor benzoic acid [9]. By the same mechanism as indoxyl sulfate and hippurate, the plasma concentration of one metabolite can be decreased if AST-120 adsorbs its precursor and prevents it from being absorbed into the body. In addition, theoretically, compounds that undergo enterohepatic circulation could be adsorbed directly by AST-120. However, so far, little is known about the metabolism and dynamics of the compounds identified in our present study. Therefore the mechanism(s) by which plasma levels of these compounds were lowered by AST-120 still remains largely unknown.
On the other hand, the plasma levels of tryptophan and trimethylamine N-oxide were increased by AST-120 treatment. These increases cannot be explained by the adsorbing effect of AST-120. It has been reported that the plasma tryptophan level is decreased in CKD patients and 5/6Nx rats [13,24]. Because Cr and Ccr did not differ between the control and AST-120 groups, it is suggested that AST-120 recovered the decline of the plasma tryptophan level in the CKD model by unknown mechanism(s) unrelated to renal function. In contrast to tryptophan, it has previously been reported that trimethylamine N-oxide accumulates in CKD patients [25]. AST-120 further increased the plasma level of trimethylamine N-oxide in 5/6Nx rats. Recently it has been reported that trimethylamine N-oxide is formed from dietary phosphatidylcholine through gut-flora-dependent metabolism and promotes atherosclerosis [26]. Therefore the increased level of trimethylamine N-oxide may be an adverse effect of AST-120 treatment. In addition, AST-120 may have change the gut-flora composition by its adsorption mechanism in 5/6Nx rats. Further study is needed to clarify the effect of AST-120 on plasma trimethylamine N-oxide level in CKD patients.
Previously, Kikuchi et al. reported that indoxyl sulfate, hippurate, phenyl sulfate, 4-ethylphenyl sulfate and p-cresyl sulfate were identified as the indicators of the effect of AST-120 in 5/6Nx rats by liquid chromatography/tandem mass spectrometry [9]. Although there were differences in the administration period (three days in Kikuchi et al.’s and four weeks in ours), our experimental model was similar to that of Kikuchi et al. As same as the result of Kikuchi et al., we also identified indoxyl sulfate and hippurate as the indicators of the effect of AST-120. However, the other compounds, i.e., phenyl sulfate, 4-ethylphenyl sulfate and p-cresyl sulfate, were not included in the measurement list in our CE-MS method. Therefore, it is unknown whether the same results were obtained for these compounds in our experimental model. The results of Kikuchi et al., and ours were summarized in Table 2.
Table 2. Changes in plasma concentration of the identified compounds in 5/6Nx rats or CKD patients. N.S. indicates that the compound concentration was not significantly changed in renal failure rats or human. Not Detected indicates that the compound concentration in plasma was lower than the detection limit of CE-MS. NA indicates that the compound was not assessed in this experiment.