Metabolism of Zearalenone in the Course of Beer Fermentation

The 6-hydroxytrypargine (6-HT) is an alkaloidal toxin of the group of tetrahydro-b-carbolines (THbC) isolated from the venom of the colonial spider Parawixia bistriata. These alkaloids are reversible inhibitors of the monoamine-oxidase enzyme (MAO), with hallucinogenic, tremorigenic and anxiolytic properties. The toxin 6-HT was the first THbC chemically reported in the venom of spiders; however, it was not functionally well characterized up to now. The action of 6-HT was investigated by intracerebroventricular (i.c.v.) and intravenous (i.v.) applications of the toxin in adult male Wistar rats, followed by the monitoring of the expression of fos-protein, combined with the use of double labeling immunehistochemistry protocols for the detection of some nervous receptors and enzymes related to the metabolism of neurotransmitters in the central nervous system (CNS). We also investigated the epileptiform activity in presence of this toxin. The assays were carried out in normal hippocampal neurons and also in a model of chronic epilepsy obtained by the use of neurons incubated in free-magnesium artificial cerebro-spinal fluid (ACSF). Trypargine, a well known THbC toxin, was used as standard compound for comparative purposes. Fos-immunoreactive cells (fos-ir) were observed in hypothalamic and thalamic areas, while the double-labeling identified nervous receptors of the sub-types rGlu2/3 and NMR1, and orexinergic neurons. The 6-HT was administrated by perfusion and ejection in “brain slices” of hippocampus, inducing epileptic activity after its administration; the toxin was not able to block the epileptogenic crisis observed in the chronic model of the epilepsy, suggesting that 6-HT did not block the overactive GluRs responsible for this epileptic activity. View Full-Text
Keywords: 6-hydroxytrypargine; fos protein; immunohistochemistry; hypothalamus; hippocampus; epilepsy; NMDA; neurotoxicity 6-hydroxytrypargine; fos protein; immunohistochemistry; hypothalamus; hippocampus; epilepsy; NMDA; neurotoxicity
►▼ Show Figures 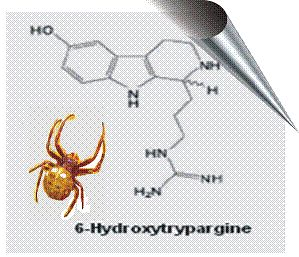