Is Toxin-Producing Planktothrix sp. an Emerging Species in Lake Constance?

Impact of Season, Region, and Traditional Agricultural Practices on Aflatoxins and Fumonisins Contamination in the Rice Chain in the Mekong Delta, Vietnam

The current study aimed to evaluate the impact of the crop season, cultivation region, and traditional pre- and post-harvest agricultural practices on mycotoxin contamination in the Mekong Delta rice chain of Vietnam. The results showed that aflatoxins (AFs) and fumonisins (FBs) were predominantly detected in both paddy (n = 91/184, 50%) and white rice (n = 9/46, 20%). Aflatoxin B1 (AFB1)-contaminated paddy samples (n = 3) exceeded the regulatory threshold (5 µg·kg−1). The contamination of paddy with AFs and FBs was not significantly different by growing seasons and cultivation localities. Evidently, in the winter–spring season, fumonisins frequently occurred in paddy planted in Can Tho, while AFs were found in paddy planted in regions Dong Thap and An Giang, and such toxins were absent in Can Tho. Furthermore, the selection of paddy varieties strongly impacted the occurrence of these toxins, especially AFs, for example, line DT8 and Jasmine were susceptible to AFs and FBs. In addition, poor pre- and post-harvest practices (such as crop residue-free fields, fertilizer application, unsanitary means of transport, delayed drying time) had an impact on the AFs and FBs contamination. Our findings can help to understand the dynamics of AFs and FBs in the rice chain in the Vietnamese Mekong Delta, leading to the mitigation of the contamination of AFs and FBs in rice. View Full-Text
Keywords: mycotoxins; crop season; cultivation area; rice chain; pre-and post-harvest; Vietnam mycotoxins; crop season; cultivation area; rice chain; pre-and post-harvest; Vietnam
►▼ Show Figures 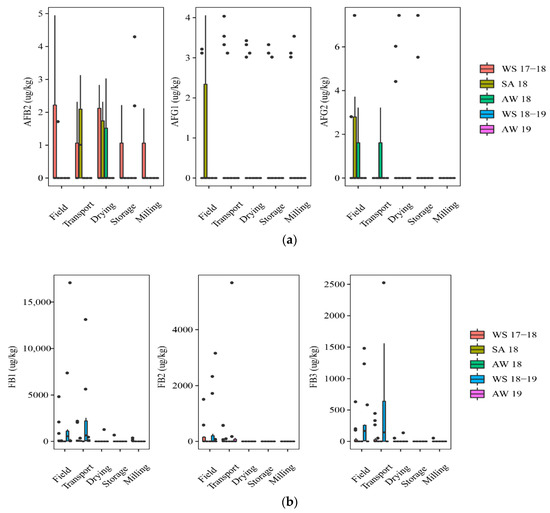