The Natterin Proteins Diversity: A Review on Phylogeny, Structure, and Immune Function

The Effects of Distributed vs. Condensed Schedule for Robot-Assisted Training with Botulinum Toxin A Injection for Spastic Upper Limbs in Chronic Post-Stroke Subjects

Robot-assisted training (RT) combined with a Botulinum toxin A (BoNT-A) injection has been suggested as a means to optimize spasticity treatment outcomes. The optimal schedule of applying RT after a BoNT-A injection has not been defined. This single-blind, randomized controlled trial compared the effects of two predefined RT approaches as an adjunct to BoNT-A injections of spastic upper limbs in chronic post-stroke subjects. Thirty-six patients received a BoNT-A injection in the affected upper extremity and were randomly assigned to the condensed or distributed RT group. The condensed group received an intervention of four sessions/week for six consecutive weeks. The distributed group attended two sessions/week for 12 consecutive weeks. Each session included 45 min of RT using the InMotion 2.0 robot, followed by 30 min of functional training. The Fugl-Meyer Assessment, Modified Ashworth Scale, Wolf Motor Function Test, Motor Activity Log, and Stroke Self-Efficacy Questionnaire were assessed at pre-training, mid-term, post-training, and at 6 week follow-up, with the exception of the Motor Activity Log, which did not include mid-term measures. After the intervention, both groups had significant improvements in all outcome measures (within-group effects, p < 0.05), with the exception of the Wolf Motor Function Test time score. There were no significant differences between groups and interaction effects in all outcome measures. Our findings suggest that RT provided in a fixed dosage as an adjunct to a BoNT-A injection has a positive effect on participants’ impairment and activity levels, regardless of treatment frequency. (ClinicalTrials.gov: NCT03321097). View Full-Text
Keywords: robotics; spasticity; stroke; rehabilitation; upper extremity robotics; spasticity; stroke; rehabilitation; upper extremity
►▼ Show Figures 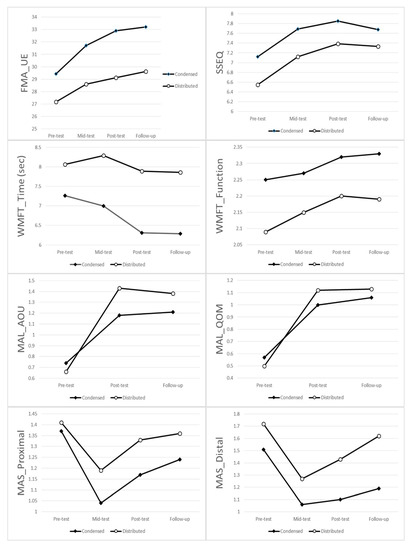