Correlations between Low Doses of Zearalenone, Its Carryover Factor and Estrogen Receptor Expression in Different Segments of the Intestines in Pre-Pubertal Gilts—A Study Protocol

Concentration of Zearalenone, Alpha-Zearalenol and Beta-Zearalenol in the Myocardium and the Results of Isometric Analyses of the Coronary Artery in Prepubertal Gilts

The carry-over of zearalenone (ZEN) to the myocardium and its effects on coronary vascular reactivity in vivo have not been addressed in the literature to date. Therefore, the objective of this study was to verify the hypothesis that low ZEN doses (MABEL, NOAEL and LOAEL) administered per os to prepubertal gilts for 21 days affect the accumulation of ZEN, α-ZEL and β-ZEL in the myocardium and the reactivity of the porcine coronary arteries to vasoconstrictors: acetylcholine, potassium chloride and vasodilator sodium nitroprusside. The contractile response to acetylcholine in the presence of a cyclooxygenase (COX) inhibitor, indomethacin and / or an endothelial nitric oxide synthase (e-NOS) inhibitor, L-NAME was also studied. The results of this study indicate that the carry-over of ZEN and its metabolites to the myocardium is a highly individualized process that occurs even at very low mycotoxin concentrations. The concentrations of the accumulated ZEN metabolites are inversely proportional to each other due to biotransformation processes. The levels of vasoconstrictors, acetylcholine and potassium chloride, were examined in the left anterior descending branch of the porcine coronary artery after oral administration of ZEN. The LOAEL dose clearly decreased vasoconstriction in response to both potassium chloride and acetylcholine (P < 0.05 for all values) and increased vasodilation in the presence of sodium nitroprusside (P = 0.021). The NOAEL dose significantly increased vasoconstriction caused by acetylcholine (P < 0.04), whereas the MABEL dose did not cause significant changes in the vascular response. Unlike higher doses of ZEN, 5 μg/kg had no negative influence on the vascular system. View Full-Text
Keywords: zearalenone; low doses; carry-over; myocardium; vascular reactivity zearalenone; low doses; carry-over; myocardium; vascular reactivity
►▼ Show Figures 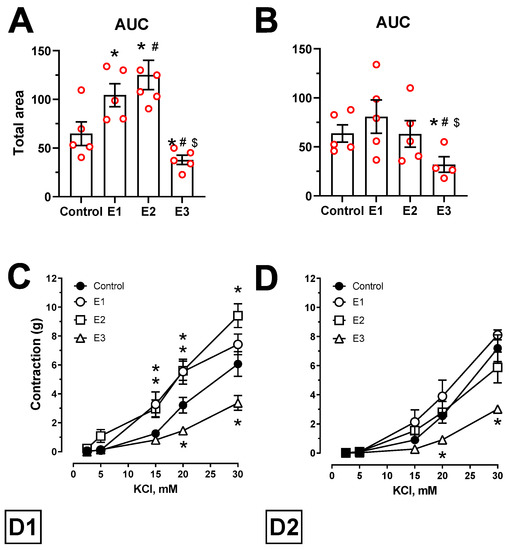