New Data on Cylindrospermopsin Toxicity
Next Article in Special Issue

Many pathogenic bacteria produce protein toxins and effectors that covalently modify host proteins to affect their functions or mimic host protein functions to interfere with host cell regulatory processes [1]. ADP-ribosyltransferases (ARTs) are a well-known type of bacterial toxin [2]. They transfer an ADP-ribose moiety from nicotinamide adenine dinucleotide (NAD+) onto a target protein to generate an ADP-ribosylated protein and nicotinamide. The bulky and negatively charged ADP-ribose moiety affects the protein function by sterically blocking interactions with partner molecules, inducing conformational changes, or creating docking sites for new interaction partners [3].
In addition to their function as bacterial toxins, ARTs have been implicated in a wide range of processes in organisms from all kingdoms of life, including the toxin–antitoxin system of bacteria and the DNA damage repair, transcription, cell-cycle progression, and cell division processes of eukaryotes [4]. Individual ARTs have specific substrates and modify specific residues or functional groups of not only proteins but also DNA, RNA, and antibiotics [5]. ARTs are subdivided into two classes based on their conservation of three significant motifs: the R-S-E class, which is related to cholera toxin; and the H-Y-E class, which is related to diphtheria toxin (Figure 1a) [6].
ARTs transfer an ADP-ribose moiety specifically onto nucleophilic atoms as follows: onto the oxygen atom of the carboxyl groups of aspartate and glutamate, the hydroxyl groups of serine and antibiotics, and the 5′ phosphate group of double-stranded DNA (dsDNA); onto the nitrogen atom of the amino group of the guanidino groups of arginine and guanine, the imidazole group of diphthamide, and the carboxamide groups of asparagine and glutamine; and onto the sulfur atom of the thiol group of cysteine [7]. However, the precise mechanism by which ARTs modify a specific residue or functional group remains an open question. In this review, we discuss the recognition mechanism of the target residues, including nucleophilic atoms, based on the complex structures of ARTs and their substrates.

Exotoxin A (ExoA) from Pseudomonas aeruginosa, diphtheria toxin (DT) from Corynebacterium diphtheriae, and cholix toxin from Vibrio cholera specifically modify translation elongation factor (eEF2) on diphthamide699 in yeast or diphthamide715 in mammals [37,38,39]. ADP-ribosylated eEF2 is unable to mediate the translocation of peptidyl-tRNA from the A to P sites on the ribosome, inhibiting protein synthesis. Arr ADP-ribosylates the hydroxyl group of rifamycins, leading to resistance against these antibiotics [40]. Arr is widely distributed in the genomes of pathogenic and nonpathogenic bacteria. Although Arr does not show sequence similarity to known ARTs, its structure is similar to those of known ARTs. The glutamate residue in the conserved motif H-Y-E is replaced by an aspartate residue that is located on the fourth strand (rather than the fifth strand) from the N-terminus. The poly(ADP-ribose) polymerase (PARP) family comprises 17 members: PARP1 to PARP16, which includes two tankyrases (PARP5a and PARP5b) [41,42]. Poly-ADP-ribose is removed by poly(ADP-ribose) glycohydrolase (PARG) and macrodomain proteins [43]. PARPs affect various cellular processes, such as DNA repair, DNA replication, transcriptional regulation, and cell division. The best-studied PARP, PARP1, is thought to be a key player in these processes and has shown promise as a target for anti-cancer drugs.

Some enzymes involved in ADP-ribosylation do not belong to the R-S-E or H-Y-E classes. ParST functions as a toxin–antitoxin (TA) system via ADP-ribosylation and is found in 18% bacterial species [44]. ParT from Sphingobium sp. YBL2 specifically modifies E. coli phosphoribosyl pyrophosphate synthetase (Prs) on Lys182 (located in the ATP binding site) or Ser202. Although Lys182 of Prs is well-conserved, Sphingobium sp. YBL2 has an aspartic acid, which is also known as an ADP-ribosylation target residue, at this position. ParT does not show sequence similarity with other ARTs, but its structure is similar to those of other ARTs; notably, the important residues H-Y-E are replaced by R-Y-N in ParT. ParS neutralizes ParT via protein–protein interaction. DarTG, which was originally identified from Mycobacterium tuberculosis, also functions in the TA system via reversible ADP-ribosylation of thymidine on single-stranded DNA (ssDNA) [45]. The ADP-ribosylation of ssDNA via DarT stalls DNA replication, and its potential toxicity can be counteracted by enzymatic removal or physical sequestration via the N-terminal macrodomain or C-terminal domain of DarG, respectively [46]. DarTs from M. tuberculosis and enteropathogenic E. coli specifically ADP-ribosylate the TNTC motif and the TTT or TCT motifs of ssDNA, respectively. Although the DarT sequence does not share sequence similarity with any other ART and its structure has not yet been revealed, DarT family sequences show conservation of the catalytic glutamate residue. Tpt1 is an essential enzyme in yeast for the final step of tRNA splicing, which generates mature tRNA from pre-tRNA [47]. Tpt1 catalyzes removal of the 2′-phosphate generated at the splice junction via a two-step reaction: (i) The 2′-phosphate of tRNA nucleophilically attacks the 1″-carbon of the ribose of NAD+ to form a tRNA with an ADP-ribosylated 2′-phosphate and release nicotinamide; and (ii) the 2″-hydroxyl of ribose of NAD+ nucleophilically attacks the 2′-phosphate to generate ADP-ribose 1″,2″ cyclic phosphate and tRNA with 2′-hydroxyl [48]. The overall structure of Tpt1 is similar to those of other ARTs, but the important residues H-Y-E are replaced by H-H-V. Generally, the last glutamate residue of H-Y-E is thought to be essential for the cleavage of NAD+ via the SN1 reaction. Therefore, it remains unclear how ParT and Tpt1 undertake the ADP-ribosylation reaction.
The human Deltex E3 ligases—DTX3L, DTX1, and DTX4—also catalyze the ADP-ribosylation of ubiquitin on Gly76 using the E2-ubiquitin thioester complex; this ADP-ribosylation does not exert a toxin function but rather contributes to the regulation of cellular processes via crosstalk between ADP-ribosylation and ubiquitination [49,50]. Deltex proteins have a conserved RING domain, which is characteristic of a RING-type E3 ligase and a Deltex carboxyl-terminal (DTC) domain in the C-terminus. Deltex forms a heterodimer with PARP9, which is a mono-ADP-ribosyltransferase reported to be enzymatically inactive, and Yang, C.-S. et al. reported that the heterodimer ADP-ribosylates the carboxyl group of ubiquitin Gly76, which is normally used for the conjugation of ubiquitin to protein substrates [49]. However, it was recently reported that this ADP-ribosylation is PARP9-independent, in that it requires only the RING and DTC domains of the Deltex protein [50]. Although the precise mechanism underlying this ADP-ribosylation remains unclear, the following mechanism is herein proposed: The E2-ubiquitin thioester complex binds to the RING domain, and the thioester bond is hydrolyzed to release ubiquitin. The carboxyl group of ubiquitin Gly76 nucleophilically attacks the NAD+ bound to the DTC domain to generate ubiquitin ADP-ribosylated on Gly76 and nicotinamide. Importantly, the structure of the DTC domain is not similar to those of the other ARTs, and the conformation of the bound NAD+ is also different from those bound to other ARTs. Thus, it seems that the DTC domain undertakes the ADP-ribosylation reaction via a totally different mechanism.

The ART core structures of the H-Y-E and R-S-E classes are similar; however, unlike the R-S-E class, members of the H-Y-E class do not have an ARTT loop, and any hypothesis on the substrate and target residue recognition mechanisms of this class have not been proposed. Two complex structures of H-Y-E ARTs and their substrate have been revealed to date, namely those of Arr and ExoA [40,60,61] (Figure 2b). The complex structure of Arr and its substrate antibiotic, rifampin, shows that they mainly interact via hydrophobic interactions. Although the complex structure with NAD is not available, superimposition of the complex structures for Arr–rifampin and ScARP–GDP–NADH shows that the H-Y-E motif of Arr and the nucleophilic oxygen atom of the rifampin hydroxyl group are located in spatially similar positions relative to the R-S-E motif of ScARP and the nucleophile nitrogen atom of GDP, respectively (Figure 2c). This suggests that the reactions of the H-Y-E and R-S-E classes proceed via a common SN1 mechanism. Another complex structure, ExoA–eEF2–NAD+, showed that the N3 atom of the imidazole ring of diphthamide (nucleophile) is 11.0 Å distant from the NC1 carbon atom of NAD (electrophile) [60,61]. Comparing the structures of ExoA–eEF2–NAD+ and ExoA–(ADPribosylated-eEF2) reveals that loop 1 of ExoA–(457-ARSQDLDA-464) is flexible. The conformation of loop 1 changes only in the NAD+-bound structure to form a hydrogen bond between Gln461 of loop 1 and diphthamide and to cap the diphthamide-binding pocket. In the transition state, it was proposed that diphthamide gets close enough to attack the electrophile [61]. It should be noted that this conformational change of the nucleophile contrasts with the electrophile conformation change seen in Ia. The positional relationship between diphthamide and NAD is different from that between NAD and Arg177 of actin, which is the target of Ia (Figure 2c): this may explain why the reaction mechanism is different.
PARP1 and PARP2 lack an ARTT loop and their structures show that they do not have a residue corresponding to the sixth residue of the ARTT loop. However, the accessory factor HPF1 binds to PARP1 and PARP2 and provides a glutamate residue that occupies a position equivalent to that of the sixth glutamate of the ARTT loop, leading to the formation of a composite active site [62]. Although the bindings of both HPF1 and NAD are sterically blocked by the α-helical domain of PARP, the binding of PARP to a dsDNA break induces a conformational change in the α-helical domain to enable the binding of both HPF1 and NAD [62,63]. The binding of HPF1 switches the specificity from aspartate or glutamate to serine [64]. Alanine substitution of the glutamate residue of HPF1 prevents serine ADP-ribosylation, suggesting that the glutamate from HPF1 determines the specificity for the serine residue, as seen in R-S-E class ARTs. However, it remains unclear whether the glutamate of HPF1 interacts with the target serine residue of its substrates, such as PARP1 and histone. In the future, analysis of the quaternary complex structure of PARP, HPF1, substrate, and NAD should provide deep insights into the functions of both H-Y-E and R-S-E class ARTs.

Recent reports revealing the complex structures of the protein-targeting ART, C3, and the DNA-targeting ART, ScARP, revealed that common mechanisms of target residue specificity are undertaken via the ARTT loop. However, the mechanisms underlying the specificities of TccC3, PT, and PARP for threonine, cysteine, and serine, respectively, remain unresolved. Moreover, the reaction mechanisms of ParT, DarT, and Tpt1 may be different, as these ARTs lack the key R-S-E or H-Y-E motifs. Going forward, efforts to determine the complex structures of ARTs and their substrates will provide important information and improve our understanding of the critical specificities of ARTs for their substrates and target residues.

Conceptualization and writing—original draft preparation, T.Y.; writing—review and editing, T.Y. and H.T. All authors have read and agreed to the published version of the manuscript.

Data sharing is not applicable.

We thank the staff at KEK-Photon Factory for the data collection. 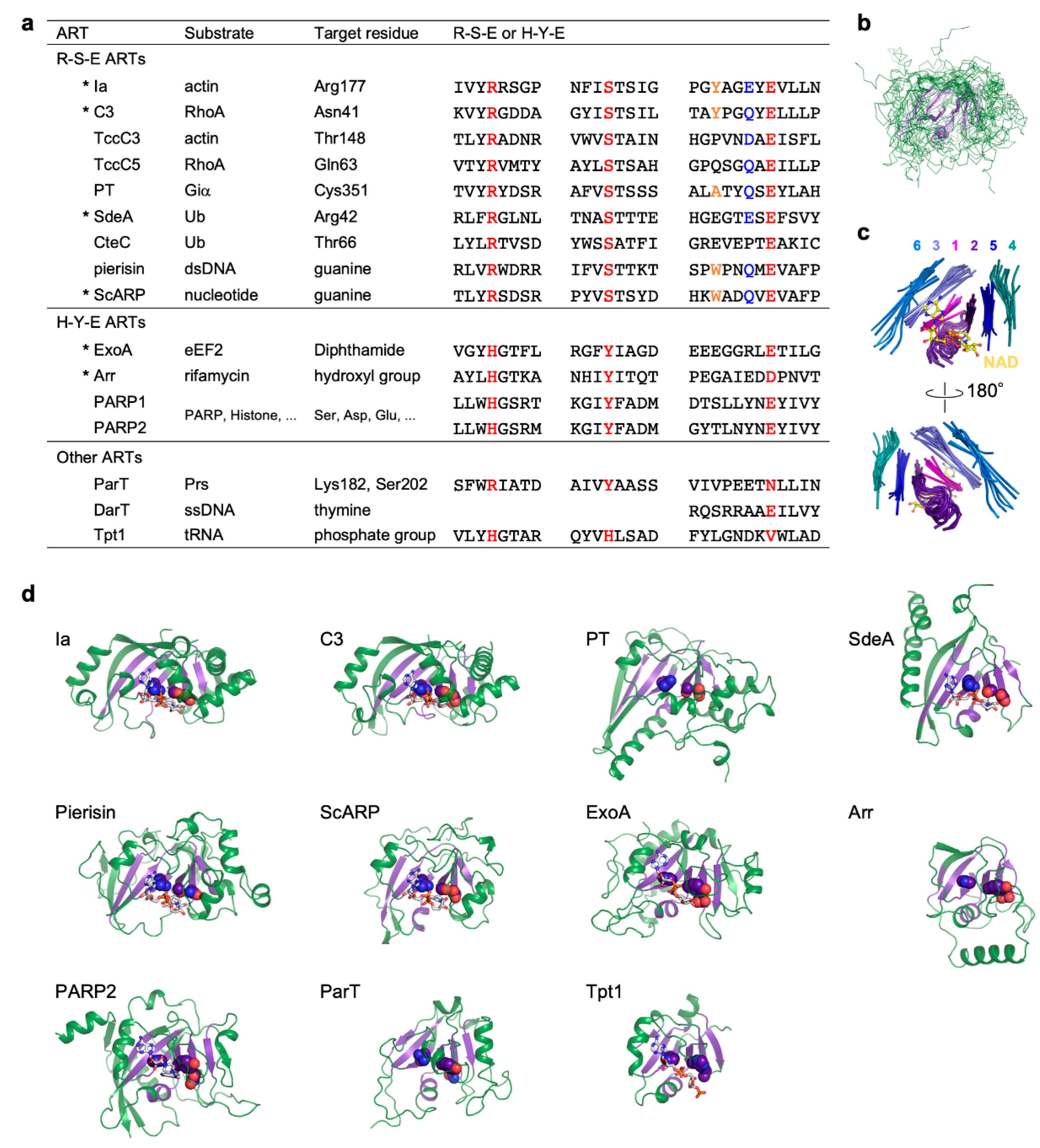 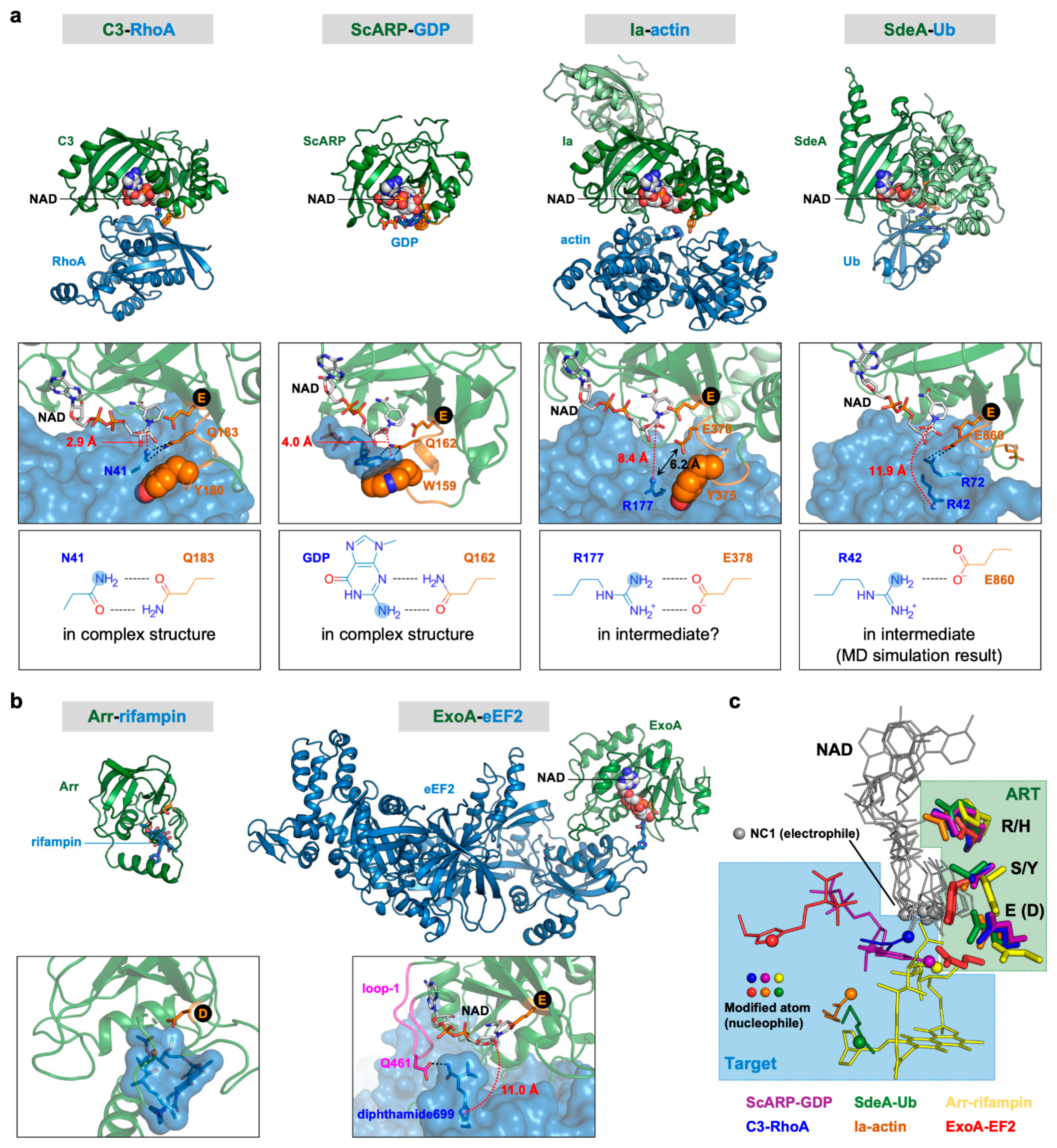