Introduction to the Toxins Special Issue on Botulinum Neurotoxins in the Nervous System: Future Challenges for Novel Indications
Previous Article in Special Issue

The deadly pandemic named COVID-19, caused by a new coronavirus (SARS-CoV-2), emerged in 2019 and is still spreading globally at a dangerous pace. As of today, there are no proven vaccines, therapies, or even strategies to fight off this virus. Here, we describe the in silico docking results of a novel broad range anti-infective fusion protein RTAM-PAP1 against the various key proteins of SARS-CoV-2 using the latest protein-ligand docking software. RTAM-PAP1 was compared against the SARS-CoV-2 B38 antibody, ricin A chain, a pokeweed antiviral protein from leaves, and the lectin griffithsin using the special CoDockPP COVID-19 version. These experiments revealed novel binding mechanisms of RTAM-PAP1 with a high affinity to numerous SARS-CoV-2 key proteins. RTAM-PAP1 was further characterized in a preliminary toxicity study in mice and was found to be a potential therapeutic candidate. These findings might lead to the discovery of novel SARS-CoV-2 targets and therapeutic protein structures with outstanding functions.
Keywords: fusion proteins; ricin; pokeweed antiviral protein; COVID-19; SARS-CoV-2; antiviral agent; ribosome-inactivating proteins fusion proteins; ricin; pokeweed antiviral protein; COVID-19; SARS-CoV-2; antiviral agent; ribosome-inactivating proteins

A new global pandemic disease named COVID-19 has emerged and is still spreading at alarming rates at the time of this report. COVID-19 can cause severe symptoms such as damaging inflammatory response, fever, or severe respiratory illness and lead to death. The causative agent of COVID-19 was found to be a novel coronavirus closely related to the severe acute respiratory syndrome coronavirus (SARS-CoV) based on the latest phylogenetic analysis [1,2,3]. There are some major essential differences in their genetic makeup that led to their different behaviors. SARS-CoV-2, as it is called now, appears to have high transmissibility from person to person, and antibodies that could inhibit SARS-CoV are not functional on SARS-CoV-2 [2,4,5]. Despite global efforts, we still lack an effective antiviral strategy, drug, or vaccine to fight this virus, with the growing fear that SARS-COV-2 may become another endemic virus in our communities.
To lower the costs and speed up the drug discovery phase, numerous researchers have used in silico tools such as protein–ligand docking software to screen for traditional compounds that could bind to and inhibit the key proteins present in SARS-CoV-2, highlighting their potential antiviral activity [6]. The major targets for these compounds include SARS-CoV-2 key proteins 3-chymotrypsin-like protease (Mpro), papain-like protease (PLpro), RNA-dependent RNA polymerase (RdRp), small envelope protein (E), membrane protein (M), and spike (S) proteins. The S proteins directly interact with human angiotensin-converting enzyme (ACE2), allowing the virus to enter the cells. The S protein is a class I fusion protein consisting of S1 and S2 domains with the receptor-binding domain (RBD) located on the S1 domain [4]. The RBD is the main target of antibodies and fusion inhibitors in development such as the human convalescent COVID-19 patient-origin B38 antibody (B38) and plant lectin griffithsin (GRFT). Here, we report the in silico potent binding mechanisms against SARS-CoV-2 key proteins of a previously discussed novel broad-spectrum anti-infective fusion protein between a mutant of the ricin A chain and pokeweed antiviral protein isoform 1 (RTAM-PAP1) from seeds of Ricinus communis and leaves of Phytolacca americana, respectively [7]. RTAM-PAP1 activity was compared with that of the B38, ricin A chain (RTA), pokeweed antiviral protein isolated from leaves (PAP1), and GRFT. Their binding capacities were evaluated against the major key proteins of SARS-CoV-2 using the latest peptide-ligand docking software [8,9,10,11,12,13].

In conclusion, given the very high affinity for SARS-CoV-2 key proteins, the previous antiviral results in vitro, the newly discovered mechanisms, the preliminary in vivo profile, potent bioactivities across the assays, and preferential entry into virus-infected cells as opposed to non-infected cells, we opine that this novel chimeric protein composed by two ribosome-inactivating proteins be tested against SARS-CoV-2 in vitro and in vivo. It would be the first therapeutic testing using this particular strategy against COVID-19 and might make a difference at subtoxic dosages as well as open the doors for the discovery of novel SARS-CoV-2 targets, therapeutic protein structures, and foundations for protein engineering. Those types of fusion proteins are able to outperform immunotoxins with lower production costs and less toxicity.

The predicted molecular 3D structure of RTAM-PAP1 was already available from previous work [7] and is available in the supplementary files (PDB file S1). The 3D models for RTA, PAP1, B38, CR3022, and GRFT were retrieved from RCSB (https://www.rcsb.org), in PDB format with the following PDB ID: 4MX5, 1PAG, 7BZ5, 6W41, and 3LL2, respectively). The 3D models for S, Mpro, PLpro, ACE2, RdRp, E, and M were retrieved directly from the CoDockPP site (https://ncov.schanglab.org.cn/). The 3D models for the B38-S1, CR3022-S1 and ACE2-S1 complexes were also retrieved from RCSB, 7BZ5, 6M0J, and 6LZG, respectively, for comparison with CoDockPP outputs.

The structure of the bound complexes was generated by CoDockPP using the ambiguous peptide-ligand computations [8,9,10]. The B38-S1, CR3022-S1, and ACE2-S1 were compared by superimposition on the available crystallography in RCSB using MATRAS pairwise 3D alignment (http://strcomp.protein.osaka-u.ac.jp/matras/matras_pair.html). Additional models of the RTAM-PAP1-S1 and RTAM-PAP1-M complexes were generated using ZDOCK and HADDOCK2.2 [11,12,13] with the available RCSB active residues as inputs for each protein. The putative active residues for RTAM-PAP1 were previously generated [7] and are available in the supplementary files (Figure S1). All models were viewed using Jmol.

RTAM-PAP1 was produced and purified as previously described [7]. The vector pET30a-6H-RPAP1 was generated and validated by DNA sequencing before being transformed into E. coli BL21 (DE3) cells (NEB). Expression of the proteins was examined from individual clones and analyzed by either Western blot using a monoclonal antibody specific to ricin A chain (ThermoFisher, RA999, Frederick, MD, USA) or SDS gel stained with Coomassie blue (ThermoFisher, Frederick, MD, USA). Optimal conditions were determined and protein production was induced in the presence of 1 mM isopropyl beta-D-1-thiogalactopyranoside (IPTG) from 1 L culture. The bacteria were then harvested by centrifugation, followed by lysing the cell pellets with 50 mL of lysis buffer (50 mM Tris•Cl, 150 mM NaCl, 0.2% Triton X100, and 0.5 mM ethylenediaminetetraacetic acid (EDTA). After sonication (3 × 2 min), the soluble lysates were recovered by centrifugation at 35,000 rpm for 40 min. The soluble proteins were then purified by the combination of affinity and conventional chromatographic methods from soluble lysates (please contact the authors for more details). The purification of the native RTAM-PAP1 from soluble lysate was achieved by affinity versus His-tag on the Ni-sepharose column (GE Healthcare). After extensive washing with the lysis buffer, loosely bound proteins were eluted with the lysis buffer containing 40 mM Imidazole (I40). RTAM-PAP1 proteins were eluted with the elution buffer (20 mM Tris•Cl, pH7.9, 100 mM NaCl, 1 mM EDTA, and 300 mM Imidazole). A second purification step using the hydroxyapatite column (GE Healthcare, Piscataway, NJ, USA) was used to further separate RTAM-PAP1 from co-purified host proteins. A third purification step, gel filtration on a fast protein liquid chromatography (FPLC) column of Superose 12 (GE Healthcare, Piscataway, NJ, USA), was necessary to completely remove degraded or/and premature protein products [7]. The resulting mixture was subjected to the endotoxin removal process using a proprietary technology developed by AscentGene until the endotoxin level was less than 10 EU/mL. The final product was formulated in the buffer containing 20 mM HEPES-Na (4-(2-hydroxyethyl)-1-piperazineethanesulfonic acid sodium salt), pH 7.9, 200 mM NaCl, 0.2 mM CaCl2, and 0.5 mM EDTA.

The inhibitory activities of RTAM-PAP1 were tested by using the Rabbit Reticulate Lysate TnT® Quick Coupled Transcription/Translation System and the Luciferase Assay System (Promega, Madison, WI, USA). Each transcription/translation reaction was performed according to the instructions for use (IFU) in the presence of a T7 Luciferase reporter DNA, and the luciferase expression level was determined with a Wallac Microplate Reader. Transcription/translation were run at three different concentrations to confirm bioactivity [7].

Female BALB/c mice, aged 6–8 weeks (Charles River Laboratories, Saint-Constant, QC, Canada), were used in this study. Female mice were housed in groups of five in individually ventilated cages. The mice were maintained at the National Research Council Canada (NRC) in accordance with the guidelines of the Canadian Council on Animal Care. All procedures performed on animals in this study were in accordance with regulations and guidelines reviewed and approved by the NRC Human Health Therapeutics Ottawa Animal Care Committee.

RTAM-PAP1 was administered by intravenous (IV) bolus injection of 0.25 mL into the tail vein in a dose-escalating manner (0.03, 0.1, 0.3, 1, and 3 mg/kg). Control mice received an equivalent volume of vehicle. Dosing was staggered to allow for an initial assessment of tolerability at a particular dose level prior to escalating to a higher dose level. Mice were weighed and evaluated daily for clinical signs for 8 days following administration of RTAM-PAP1. Data were analyzed using GraphPad Prism (GraphPad Software, Inc., San Diego, CA, USA). Statistical significance of the difference between groups was calculated by 1- or 2-factor ANOVA followed by post-hoc analysis. Differences were considered to be not significant at p > 0.05.

This work was funded by Ophiuchus Medicine which owns the rights to the patent pending of the fusion protein described in this study. The entire study was done at the request of, by, and for Ophiuchus Medicine.

The FP7 WeNMR (project# 261572), H2020 West-Life (project# 675858), and the EOSC-hub (project# 777536) European e-Infrastructure projects are acknowledged for the use of their web portals, which make use of the EGI infrastructure with the dedicated support of CESNET-MCC, INFN-PADOVA, NCG-INGRID-PT, TW-NCHC, SURFsara, and NIKHEF, and the additional support of the national GRID Initiatives of Belgium, France, Italy, Germany, the Netherlands, Poland, Portugal, Spain, U.K., Taiwan, and the U.S. Open Science Grid. 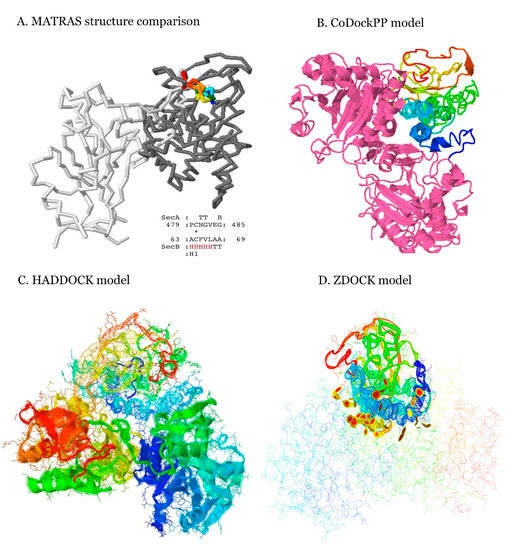 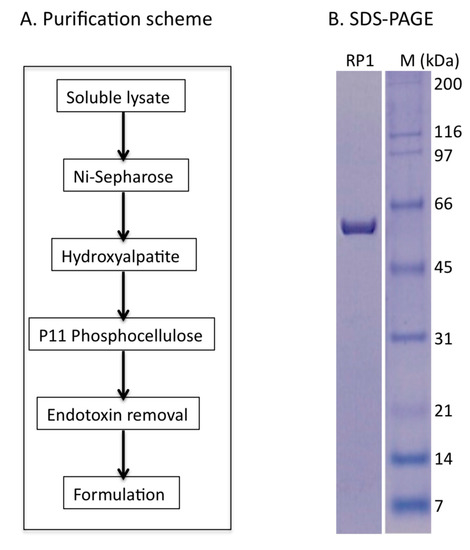