Zearalenone-Induced Interaction between PXR and Sp1 Increases Binding of Sp1 to a Promoter Site of the eNOS, Decreasing Its Transcription and NO Production in BAECs
Previous Article in Special Issue

The diversity of Type-II toxin–antitoxin (TA) systems in bacterial genomes requires tightly controlled interaction specificity to ensure protection of the cell, and potentially to limit cross-talk between toxin–antitoxin pairs of the same family of TA systems. Further, there is a redundant use of toxin folds for different cellular targets and complexation with different classes of antitoxins, increasing the apparent requirement for the insulation of interactions. The presence of Type II TA systems has remained enigmatic with respect to potential benefits imparted to the host cells. In some cases, they play clear roles in survival associated with unfavorable growth conditions. More generally, they can also serve as a “cure” against acquisition of highly similar TA systems such as those found on plasmids or invading genetic elements that frequently carry virulence and resistance genes. The latter model is predicated on the ability of these highly specific cognate antitoxin–toxin interactions to form cross-reactions between chromosomal antitoxins and invading toxins. This review summarizes advances in the Type II TA system models with an emphasis on antitoxin cross-reactivity, including with invading genetic elements and cases where toxin proteins share a common fold yet interact with different families of antitoxins. View Full-Text
Keywords: cognate interactions; cross-interactions; molecular insulation; toxin; antitoxin; TA systems; addiction; anti-addiction cognate interactions; cross-interactions; molecular insulation; toxin; antitoxin; TA systems; addiction; anti-addiction
►▼ Show Figures 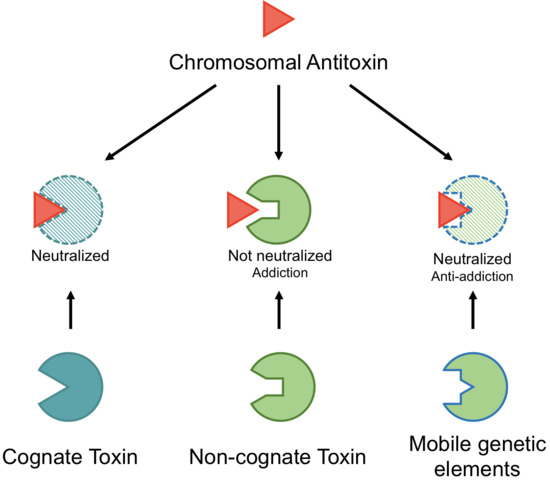