Use of Competitive Filamentous Fungi as an Alternative Approach for Mycotoxin Risk Reduction in Staple Cereals: State of Art and Future Perspectives

Deoxynivalenol (DON) is one of the most prevalent food- and feed-associated mycotoxins. It frequently contaminates agricultural commodities and poses serious threats to human and animal health and leads to tremendous economic losses globally. Much attention has been paid to using microorganisms to detoxify DON. In this study, a Bacillus licheniformis strain named YB9 with a strong ability to detoxify DON was isolated and characterized from a moldy soil sample. YB9 could degrade more than 82.67% of 1 mg/L DON within 48 h at 37 °C and showed strong survival and DON degradation rate at simulated gastric fluid. The effects of YB9 on mice with DON intragastrical administration were further investigated by biochemical and histopathological examination and the gut microbiota was analyzed by 16S rRNA Illumina sequencing technology. The results showed that DON increased the levels of aspartate aminotransferase (AST), alanine aminotransferase (ALT), and creatinine (Cr), decreased those of immunoglobulin G (IgG) and IgM in serum, and resulted in severe pathological damage of the liver, kidney, and spleen. By contrast, YB9 supplementation obviously inhibited or attenuated the damages caused by DON in mice. In addition, YB9 addition repaired the DON-induced dysbiosis of intestinal flora, characterized by recovering the balance of Firmicutes and Bacteroidetes to the normal level and decreasing the abundance of the potentially harmful bacterium Turicibacter and the excessive Lactobacillus caused by DON. Taken together, DON-degrading strain YB9 might be used as potential probiotic additive for improving food and feed safety and modulating the intestinal microbial flora of humans and animals. View Full-Text
Keywords: deoxynivalenol; degradation and detoxification; Bacillus licheniformis YB9; intestinal microbial flora deoxynivalenol; degradation and detoxification; Bacillus licheniformis YB9; intestinal microbial flora
►▼ Show Figures 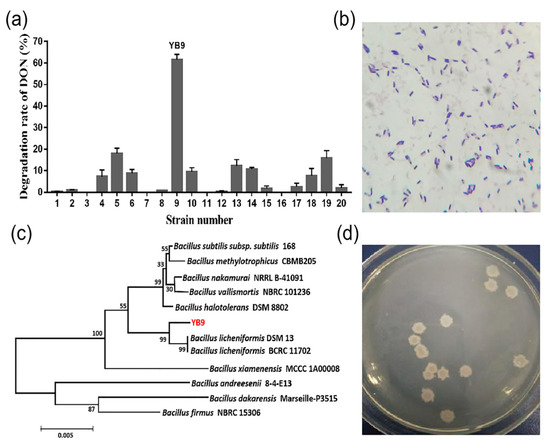