In this study, durum wheat kernels harvested in three climatically different Italian cultivation areas (Emilia Romagna, Umbria and Sardinia) in 2015, were analyzed with a combination of different isolation methods to determine their fungal communities, with a focus on Fusarium head blight (FHB) complex composition, and to detect fungal secondary metabolites in the grains. The genus Alternaria was the main component of durum wheat mycobiota in all investigated regions, with the Central Italian cultivation area showing the highest incidence of this fungal genus and of its secondary metabolites. Fusarium was the second most prevalent genus of the fungal community in all cultivation environments, even if regional differences in species composition were detected. In particular, Northern areas showed the highest Fusarium incidence, followed by Central and then Southern cultivation areas. Focusing on the FHB complex, a predominance of Fusarium poae, in particular in Northern and Central cultivation areas, was found. Fusarium graminearum, in the analyzed year, was mainly detected in Emilia Romagna. Because of the highest Fusarium incidence, durum wheat harvested in the Northern cultivation area showed the highest presence of Fusarium secondary metabolites. These results show that durum wheat cultivated in Northern Italy may be subject to a higher FHB infection risk and to Fusarium mycotoxins accumulation. View Full-Text
Keywords: Fusarium head blight; Triticum turgidum subsp. durum; mycotoxins; cereals; wheat Fusarium head blight; Triticum turgidum subsp. durum; mycotoxins; cereals; wheat
►▼ Show Figures 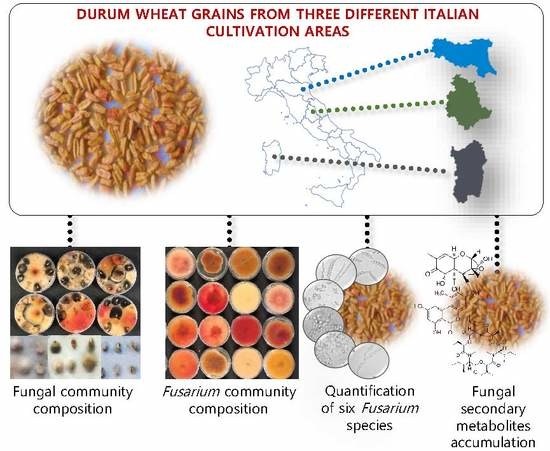