Calcination Improves the In Vivo Efficacy of a Montmorillonite Clay to Bind Aflatoxin G1 in Broiler Chickens: A Toxicokinetic Approach

The goal of this study was to investigate the toxicokinetic characteristics of aflatoxin G1 (AFG1) in broiler chickens and the effect of calcination of a Tunisian montmorillonite clay on the in vivo absorption of AFG1. In this study, broiler chickens were randomly distributed into four groups of 10 animals. Group 1 was administered AFG1 (2 mg/kg body weight (BW)) by single intravenous injection (IV), group 2 received an intra-crop bolus (PO) of AFG1 without any clay, group 3 was dosed AFG1 PO together with an oral bolus of purified clay (CP), and group 4 received AFG1 PO with an oral bolus of calcined clay. A significant difference in the area under the curve (AUC0-t) was observed for group 4 (6.78 ± 4.24 h*ng/mL) in comparison with group 2 (12.83 ± 4.19 h*ng/mL). A significant reduction of the oral bioavailability of AFG1 was observed for group 4 (7.61 ± 4.76%) compared with group 2 (14.40 ± 4.70%), while no significant effect was observed of CP. In this experiment, no phase I nor phase II metabolites of AFG1 were observed. These findings confirm that calcination of the purified montmorillonite clay enhances the adsorption of AFG1 in the gastrointestinal tract after oral administration, thereby reducing its bioavailability, thus reducing its toxic effects. View Full-Text
Keywords: AFG1; toxicokinetics; LC-MS/MS; LC-HRMS; calcination; montmorillonite clay; broiler chicken AFG1; toxicokinetics; LC-MS/MS; LC-HRMS; calcination; montmorillonite clay; broiler chicken
►▼ Show Figures 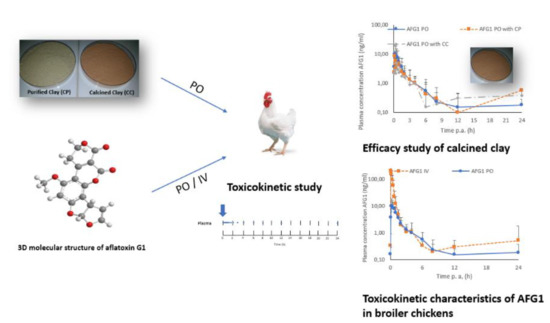