Baicalein Inhibits Stx1 and 2 of EHE: Effects of Baicalein on the Cytotoxicity, Production, and Secretion of Shiga Toxins of Enterohaemorrhagic Escherichia coli
Previous Article in Special Issue

Annona cherimola Mill is a large green fruit with black seeds widely known to possess toxic properties due to the presence of Annonaceous acetogenins. The present study investigates the anti-cancer properties of an Annona cherimola Mill ethanolic seed extract on Acute Myeloid Leukemia (AML) cell lines in vitro and elucidates the underlying cellular mechanism. The anti-proliferative effects of the extract on various AML cell lines and normal mesenchymal cells (MSCs) were assessed using WST-1 viability reagent. The pro-apoptotic effect of the extract was evaluated using Annexin V/PI staining and Cell Death ELISA. The underlying mechanism was deciphered by analyzing the expression of various proteins using western blots. Treatment with an A. cherimola seed ethanolic extract promotes a dose- and time-dependent inhibition of the proliferation of various AML cell lines, but not MSCs. Positive Annexin V staining, as well as DNA fragmentation, confirm an increase in apoptotic cell death by upregulating the expression of pro-apoptotic proteins which control both intrinsic and extrinsic pathways of apoptosis. GC/MS analysis revealed the presence of phytosterols, in addition to other bioactive compounds. In conclusion, Annona cherimola Mill seed extract, previously known to possess a potent toxic activity, induces apoptosis in AML cell lines by the activation of both the extrinsic and the intrinsic pathways. View Full-Text
Keywords: Annona cherimola Mill; apoptosis; cancer; leukemia; toxic Annona cherimola Mill; apoptosis; cancer; leukemia; toxic
►▼ Show Figures 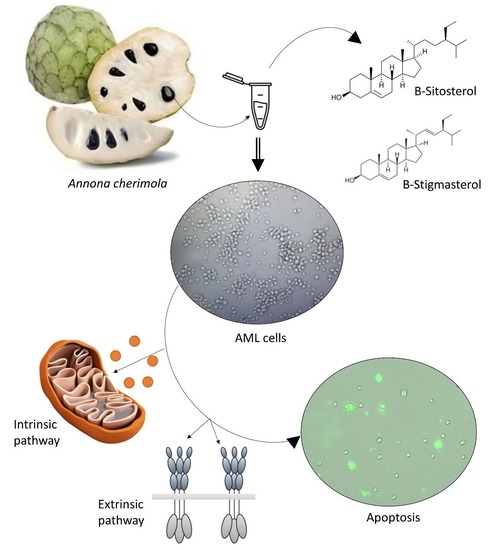