Massive Occurrence of the Harmful Benthic Dinoflagellate Ostreopsis cf. ovata in the Eastern Adriatic Sea
Next Article in Special Issue

αD-Conotoxins in Species of the Eastern Pacific: The Case of Conus princeps from Mexico
Previous Article in Journal

Effects of Predator-Prey Interactions on Predator Traits: Differentiation of Diets and Venoms of a Marine Snail

Species interactions are fundamental ecological forces that can have significant impacts on the evolutionary trajectories of species. Nonetheless, the contribution of predator-prey interactions to genetic and phenotypic divergence remains largely unknown. Predatory marine snails of the family Conidae exhibit specializations for different prey items and intraspecific variation in prey utilization patterns at geographic scales. Because cone snails utilize venom to capture prey and venom peptides are direct gene products, it is feasible to examine the evolution of genes associated with changes in resource utilization. Here, we compared feeding ecologies and venom duct transcriptomes of individuals from three populations of Conus miliaris, a species that exhibits geographic variation in prey utilization and dietary breadth, in order to determine the extent to which dietary differences are correlated with differences in venom composition, and if expanded niche breadth is associated with increased variation in venom composition. While populations showed little to no overlap in resource utilization, taxonomic richness of prey was greatest at Easter Island. Changes in dietary breadth were associated with differences in expression patterns and increased genetic differentiation of toxin-related genes. The Easter Island population also exhibited greater diversity of toxin-related transcripts, but did not show increased variance in expression of these transcripts. These results imply that differences in dietary breadth contribute more to the structural and regulatory differentiation of venoms than differences in diet. View Full-Text
Keywords: conotoxin; RNA-seq; differential expression; single nucleotide polymorphism; predator-prey interactions conotoxin; RNA-seq; differential expression; single nucleotide polymorphism; predator-prey interactions
►▼ Show Figures 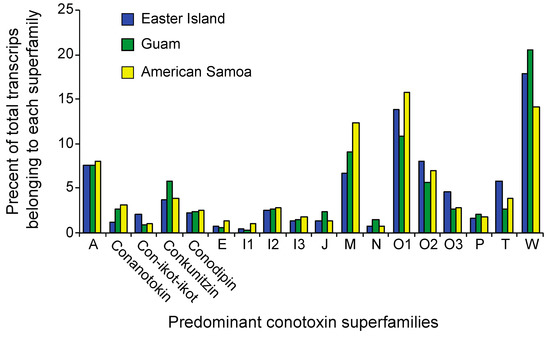