D. russelii Venom Mediates Vasodilatation of Resistance Like Arteries via Activation of Kv and KCa Channels

Fusarium head blight (FHB) is one of the most destructive wheat fungal diseases, causing yield loss, quality reduction, and accumulation of mycotoxins. The aim of this research was to summarize the occurrence of major Fusarium mycotoxins: deoxynivalenol (DON), 3-acetyldeoxynivalenol (3-AcDON), nivalenol (NIV), and zearalenone (ZEN) in two consecutive years to search the relationship between disease incidence and severity with mycotoxins found in control and inoculated grains and corresponding malt. In addition, deoxynivalenol-3-glucoside (D3G) in one-year research was measured. Tested wheat varieties showed infection scores of 3% (‘U1’ and ‘Sirban Prolifik’) to 79% (‘Golubica’) for Type I resistance evaluation. There were few moderately resistant varieties in view of their areas under the disease progress curve, which can be considered Type III resistance (‘Sirban Prolifik’ and ‘U1’). According to the data quantified by LC–MS/MS, DON decreased in infected malt in comparison to corresponding grain, while ZEN occurred only in infected malt samples. Both 3-AcDON and NIV increased in inoculated malt in comparison to corresponding grain, due to a combination of plant metabolism and de novo synthesis by molds during malting. Based on the results, we can draw a few conclusions: the resistance to Fusarium decreased quantified concentrations of DON; ZEN gets synthetized during malting; unregulated 3-AcDON and NIV increase during malting; more resistant varieties have converted DON to D3G more successfully. Modified mycotoxins should be also included to legislation, since they could be transformed back to the corresponding mycotoxins under food processing conditions or during digestion. View Full-Text
Keywords: Fusarium; deoxynivalenol; nivalenol; zearalenone; wheat malt Fusarium; deoxynivalenol; nivalenol; zearalenone; wheat malt
►▼ Show Figures 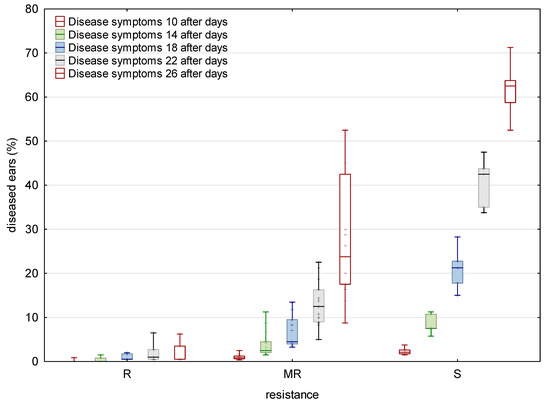 
Spanic V, Zdunic Z, Drezner G, Sarkanj B. The Pressure of Fusarium Disease and Its Relation with Mycotoxins in The Wheat Grain and Malt. Toxins. 2019; 11(4):198.


Spanic, Valentina; Zdunic, Zvonimir; Drezner, Georg; Sarkanj, Bojan. 2019. "The Pressure of Fusarium Disease and Its Relation with Mycotoxins in The Wheat Grain and Malt." Toxins 11, no. 4: 198.