Ochratoxin A (OTA) is a potent nephrotoxic, hepatotoxic, and teratogenic compound which is a significant mycotoxin contaminates cereals during storage. Aspergillus ochraceus is the most common producer of OTA in cereals and cereal-derived products. Cinnamaldehyde is a natural substance derived from plant cinnamon playing an important role in the reduction of OTA contamination. In this study, the antifungal and antitoxigenic effect of cinnamaldehyde was investigated with its mechanisms of inhibition of fungal growth at the morphological and ultrastructural levels, and inhibition of OTA biosynthesis at the transcriptional level. Significant A. ochraceus growth was inhibited at 0.4–1.6 mmol/L with fumigation. A. ochraceus exposed to 0.4 mmol/L of cinnamaldehyde indicated irreversible harmful morphological and ultrastructural modifications such as the folding of the cell, the loss of integrity of the cell wall, the disruption of plasma membrane, the destruction of the mitochondria, and the absence of intracellular organelles. These alterations may be attributed to its inhibition of enzymatic reactions that regulate cell wall synthesis, thus disturbing the morphogenesis and growth of A. ochraceus. In the presence of cinnamaldehyde, the tested biosynthetic and regulatory genes like pks, nrps, veA, laeA and velB were highly downregulated. Moreover, the downregulation effect of cinnamaldehyde increased proportionally with the concentrations. These results suggest that the decrease of OTA production by cinnamaldehyde is attributed to the downregulation of the transcriptional levels of OTA biosynthetic and regulatory genes besides the inhibition of fungal growth. The study reveals the mechanisms of the antifungal and antitoxigenic activities of cinnamaldehyde against A. ochraceus, and further emphasizes that cinnamaldehyde could be a safe and effective natural agents against OTA contamination during cereals storage. View Full-Text
Keywords: ochratoxin A; Aspergillus ochraceus; cinnamaldehyde; gene expression; real-time PCR ochratoxin A; Aspergillus ochraceus; cinnamaldehyde; gene expression; real-time PCR
►▼ Show Figures 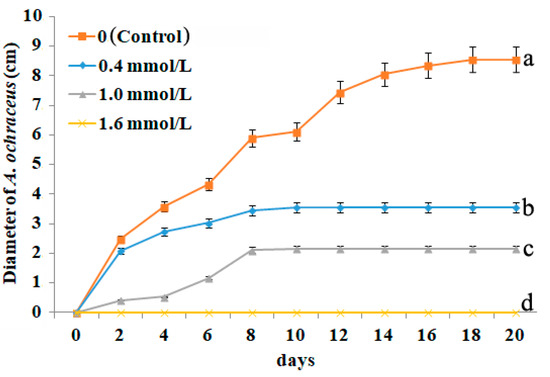