A Time Series of Water Column Distributions and Sinking Particle Flux of Pseudo-Nitzschia and Domoic Acid in the Santa Barbara Basin, California

Mycotoxins are mainly produced by filamentous fungi in a complex matrix [1,2]. Mycotoxins can contaminate different agricultural commodities and they are mainly detected in cereals, such as barley, wheat, maize, and even fruit and related products [3,4,5,6]. Considering the severe toxicity, the presence of mycotoxins in foods could induce a high potential risk to human health, such as endocrine disorders, immunosuppression, teratogenic, carcinogenic and mutagenic effects, and so on [7,8]. In recent decades, due to the high frequency of contamination and widespread occurrence, mycotoxins have increasingly attracted attention worldwide.
It is well known the kelps are major keystone species which remain deep rooted in the marine environment [9]. Also, there are ample minerals and nutrients in kelps, which make them highly bioactive for human beings. Kelps usually grow on the bottom of the sea. They contain fiber, protein, beta carotene, amino acids, enzymes and chlorophyll, leading to the high quality in foods. In addition, there are also phosphorus, iron, sodium, potassium, calcium, magnesium, and other minerals in kelp [10]. Considering the similar components as cereals with protein and polysaccharose, fungi may also grow in kelps during the storage stage. Therefore, mycotoxins might also occur in kelps and related food and feeds. To the best of our knowledge, there is scarcely any information regarding the presence of mycotoxins in kelps. Reports about the transformation and generation of mycotoxins in kelps have also not been presented. In order to control mycotoxins in foods and feeds, the first and most important step is to develop sensitive and reliable methods for mycotoxin monitoring.
In the last decades, there have been numerous studies on mycotoxin detection with different chromatographic equipment, such as High Performance Liquid Chromatography (HPLC) [11,12,13], Liquid Chromatography Tandem Mass Spectrometry (LC-MS/MS) [14,15,16]), Gas Chromatography (GC) [17,18], Gas Chromatography Tandem Mass Spectrometry (GC-MS) [19,20,21,22], and so on. Antibody-based immunoassays were also applied for mycotoxin detection with advantages of simplicity, low–cost and high throughput. These immunoassays mainly include enzyme linked immunosorbent assay (ELISA) [23,24,25], fluorescence polarization immunoassay (FPIA) [26,27,28], surface plasmon resonance (SPR) [29,30,31,32], flow cytometric microsphere immunoassay [33,34,35], and rapid strip tests [36,37]. However, these methods mainly focused on cereal matrix and related products. As far as we know, there are very few reports on the detection of these targets in marine-derived products, especially kelps. Considering the high frequency of contamination of mycotoxins in cereals, exposure to kelps with similar components as cereals should be taken seriously. For the exposure investigation, the first and most important step is to develop a reliable detection method for mycotoxins in kelps.
In this work, a rapid, reliable, and sensitive LC-MS/MS method was developed for mycotoxin exposure detection in kelp. In order to obtain a satisfactory recovery for each analyte, sonication and an acidulated extraction pretreatment were investigated and optimized in this work. In order to minimize the matrix effect, each sample was further purified by a PLEXA cartridge. Based on this method, in 43 of 50 kelp samples in Shandong Province, 3AcDON/15AcDON was detected with a positive rate of 86%. In China, Shandong Province is one of the major kelp production and consumption areas, and the contamination of mycotoxins will lead to high dietary exposure risk to human beings.

The LC isocratic elution program for all 7 compounds could be finished within 7.5 min and resulted in satisfactory sensitivity and peak shape (Figure 1). From the figure, it is difficult to distinguish 3AcDON and 15AcDON from both the chromatogram and spectrum due to the similar structures and same precursor and production ions. Therefore, the two mycotoxins were monitored and calculated as a whole. The optimized MRM parameters are shown in Table 1. The result showed that DON, NIV, and ZEA exhibited higher response in ESI negative mode while 3AcDON/15AcDON, F-X, and T-2 toxin exhibited higher response in ESI positive mode, consistent with previous literature [38,39,40].

In the previous, MSPD (matrix solid phase dispersion) [46,47], SPE (Solid Phase Extraction) [48], IAC (Immunoaffinity Colum) [6,11,43], and MycoSep227 [49] were applied for mycotoxin purification. However, MSPD requires a complicated treatment procedure and it is not suitable for high–throughput analysis. IAC requires specific antibodies for the combination of target analytes. Moreover, IAC is usually applied for high–specific and class–specific analysis of targets. It is not suitable for the detection of multiple mycotoxins. Therefore, in this research, SPE cartridges (C18 and PLEXA) were investigated and optimized with different elutions (methanol and acetonitrile) for the purification of the 7 target mycotoxins (Figure 3). From the figure, when acetonitrile was used as the elute solvent, recoveries of DON and F-X were very low. Recoveries of all the targets were satisfactory in both the PLEXA and C18 columns with methanol as the elute solvent. Furthermore, the recoveries of target analytes in the PLEXA column were higher than in the C18 column with methanol as the elute solvent. Therefore, the PLEXA column was adopted for mycotoxins purification with methanol as the elute solvent.

In order to evaluate the linearity of this procedure, matrix-matched regression calibration curves were investigated at 7 spiked levels from 1 to 1000 μg kg−1. The equations for each analyte are shown in Table 3 with correlation coefficients (r) over 0.99. The wide range can cover the entire target analyte concentrations determined in clinical samples. Samples with high contaminated levels over liner range could be diluted before LC-MS/MS detection

Accuracy and precision of this method are shown in Table 4. These values were evaluated from recoveries of each analyte in fortified samples at two different spiked concentrations. Recoveries were determined by the calculated concentrations divided by the spiked levels. The intra–day and inter–day RSDs (Relative Standard Deviations) of each analyte were determined from process fortified samples with each concentration of 5 replicates on three separate days. From the table, mean recoveries were 72.59~107.34% for all the analytes with intra–day RSD less than 9.21% and inter–day RSD less than 9.09%, respectively. From the results, it can be concluded that the developed method could be applied to monitor these mycotoxins in kelps.

2.4. Dietary Exposure of Mycotoxins in Kelp

In order to investigate the dietary exposure of mycotoxins in kelp, 50 kelp samples were obtained from a local supermarket in Shandong Province, China. Each sample was processed according to this LC-MS/MS protocol. In total, 43 kelp samples were detected with 3AcDON/15AcDON, with a positive rate of 86%, while T-2, F-X, DON, ZEA and NIV were negative in all tested samples in Shandong Province in Northern China (Table 5). Considering that the major difference between kelps and cereals is salinity, it seems that the Foodborne fungi can mainly produce acetylated metabolites of DON. As for T-2 toxin, F-X, ZEA, and NIV, they might not be produced in marine food with a high percentage of salinity. It is reported that the kelp production in China accounts for almost 80% of the whole world. In China, Shandong Province, Fujian Province, and Liaoning Province are the main kelp production regions, which produce about 99% of the total kelp output, which is over two million tons (Analysis and prospect of kelp industry development in China, 2016–2020). The kelp production in Shandong Province is over 800 thousand tons. The consumption patterns mainly include direct consumption and health product production. However, investigations about mycotoxins in kelp are limited until now. The exposure risk of mycotoxins in kelp dietary is neglected. From the commercial samples tested in this work, it can be concluded that dietary kelp might be a potential exposure pathway of 3AcDON/15AcDON.

In conclusion, a sonication based quantitative and confirmatory LC-MS/MS procedure was developed for the determination of 7 major mycotoxins (3AcDON, 15AcDON, DON, F-X, NIV, T-2, and ZEA). Specifically, target analytes were extracted with acidulated methanol/acetonitrile/formic acid (49.5/49.5/1, v/v/v). After the extraction, each sample was further purified by a PLEXA cartridge to minimize the matrix effect. The validation of this developed procedure proved the suitability of the method for the confirmatory analysis of mycotoxins with mean recoveries from 72.59~107.34%, intra-day RSD < 9.21%, inter-day RSD < 9.09%, LOD < 5.55 μg kg−1, and LOQ < 18.5 μg kg−1. With respect to real samples, T-2, F-X, DON, ZEA and NIV were not detected in any sample, while all samples had 3AcDON/15AcDON that ranged from 57.5 to 162.5 μg kg−1 with a positive rate of 86%. Considering that Shandong Province is one of the major kelp production and consumption areas in China (over 40%), the contamination of mycotoxins will lead to high dietary exposure risk to human beings.

Two grams of dried kelp sample was weighed into a 50-mL polypropylene centrifuge tube. Two experiment groups were fortified with 50 and 100 µg kg−1 of each analyte. One unfortified group was set as the negative control. Twenty milliliters of methanol/ethyl acetate/formic acid (49.5/49.5/1, v/v/v) was added and ultrasound was performed for 2 min followed by vortexing for 3 min for extraction. Each sample was centrifuged at 9000 rpm for 10 min at 4 °C. The supernatant was transferred and dried using a nitrogen evaporator at 60 °C. The residues were re-dissolved with 10 mL of water by vortexing for 3 min. Each sample was loaded onto a PLEXA cartridge with 5 mL of methanol and 5 mL of water in turn. After rinsing with 5 mL of water, analytes were eluted with 5 mL of methanol. After drying using a nitrogen evaporator at 60 °C, target analytes were re-dissolved with 1 mL of water/acetonitrile(9/1, v/v). Samples were filtered through a 0.22-μm filter and 10 μL was injected for LC-MS/MS analysis. 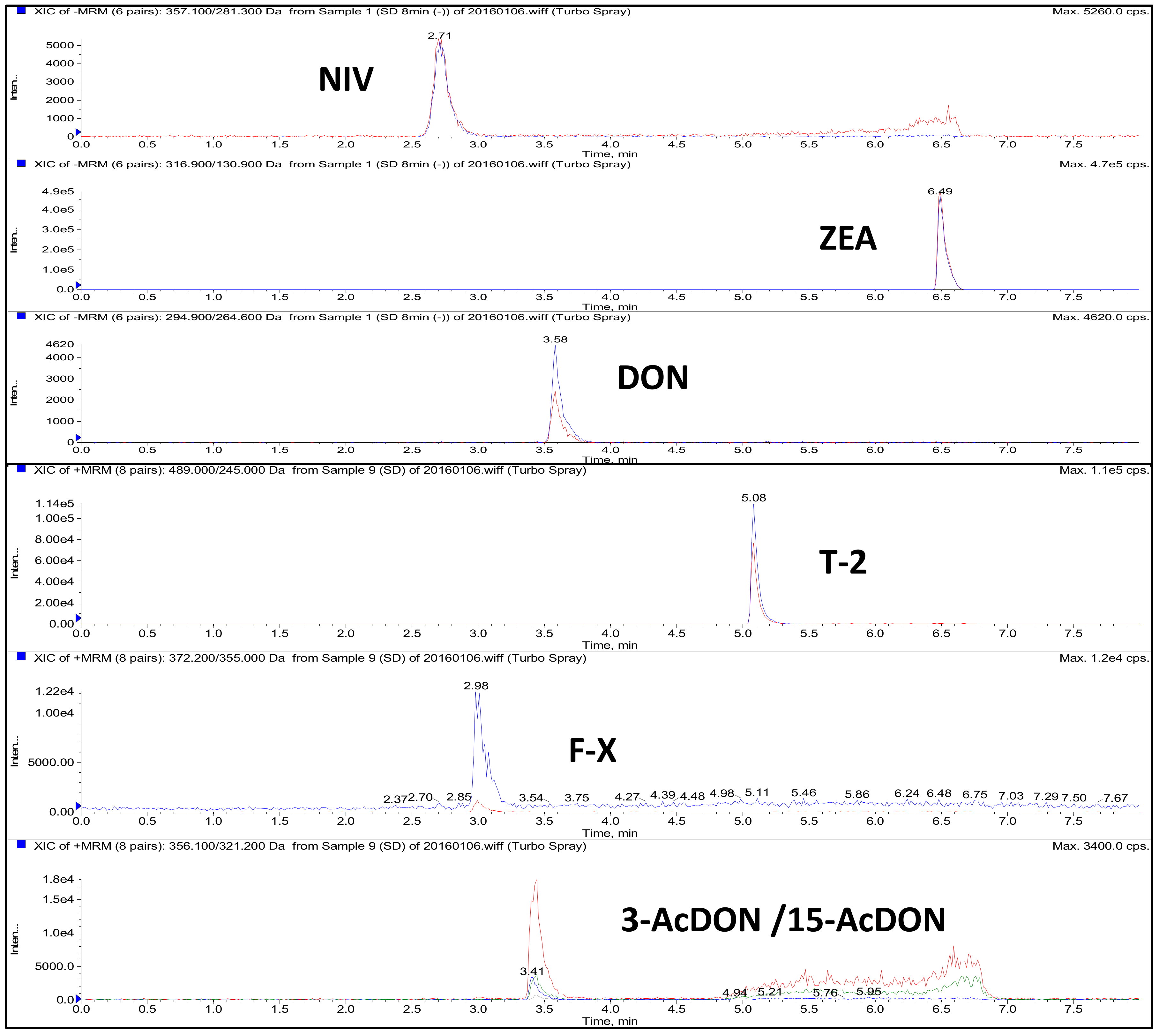 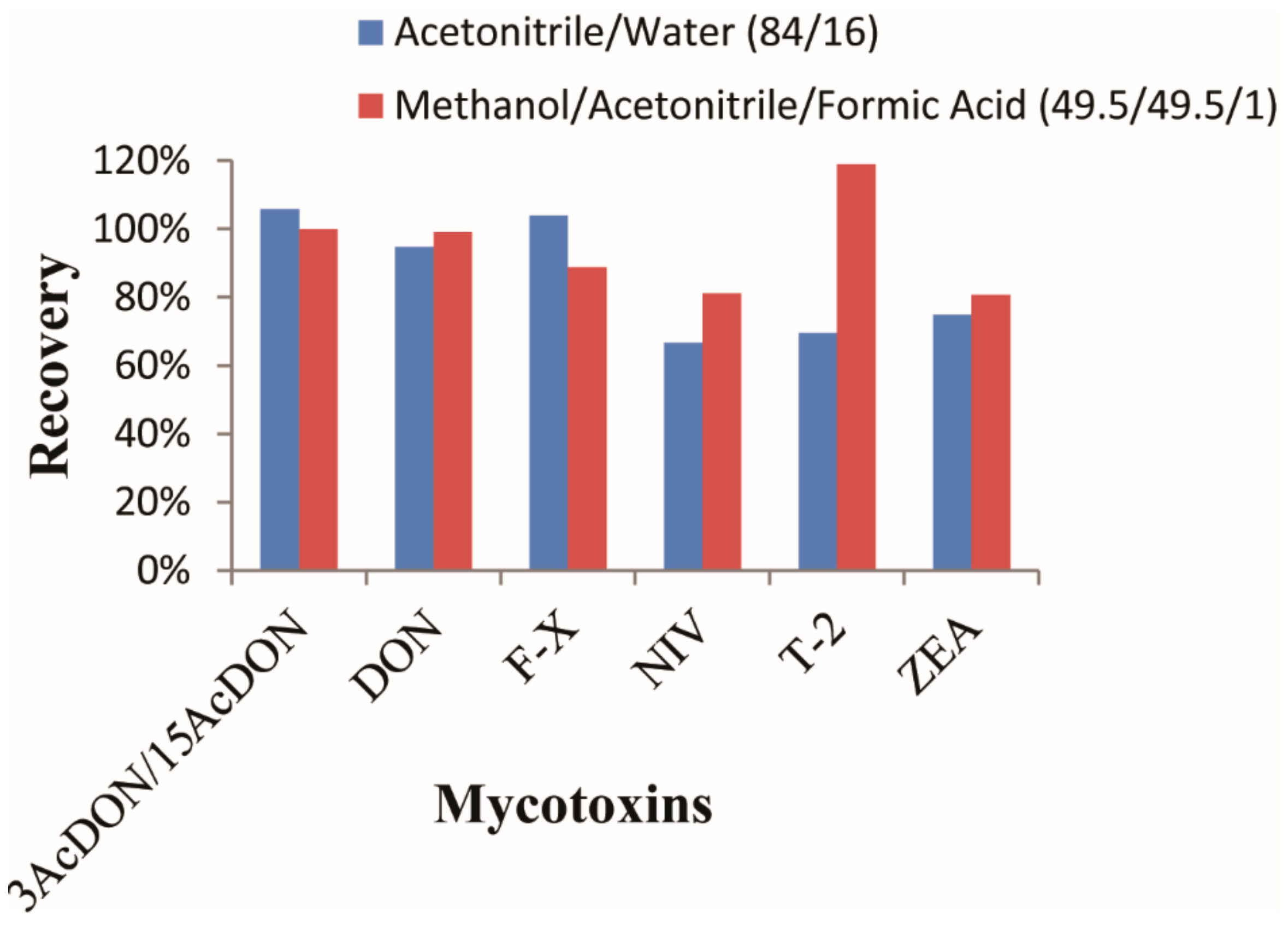 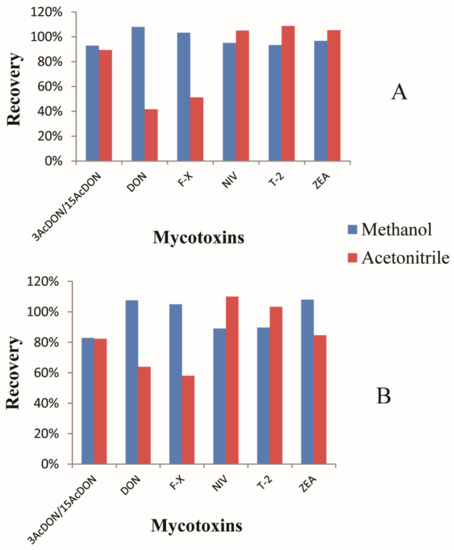