Comparison of Sociodemographic and Nutritional Characteristics between Self-Reported Vegetarians, Vegans, and Meat-Eaters from the NutriNet-Santé Study

Age-related bone loss is a major public health problem. This cross-sectional study examined the association between the dietary intake of carotenoids and bone mineral density (BMD). Data from 8022 subjects (3763 males and 4259 females) aged 30–75 years included in the Korean National Health and Nutrition Examination Survey (2008–2011) were analyzed. BMD was measured by dual-energy X-ray absorptiometry. Intake of carotenoids was estimated using 24-h dietary recall. In multiple linear analysis, after adjusting for covariates, lutein + zeaxanthin and β-cryptoxanthin intake was positively associated with total hip BMD in males and premenopausal women respectively, while β-carotene intake was positively correlated with femoral neck, total hip, and whole-body BMD in postmenopausal women. Postmenopausal women in the highest quintile of daily β-carotene intake, showed a lower risk of osteopenia at the lumbar spine (odds ratio (OR): 0.35, 95% CI: 0.16–0.79, P for trend = 0.009) than those in the lowest quintile, after adjusting for covariates. Daily β-cryptoxanthin intake was significantly associated with a lower risk of osteopenia at the total hip (OR per 1 mg/day increase: 0.76; 95% CI: 0.59–0.97), and lumbar spine (OR per 1 mg/day increase: 0.79; 95% CI: 0.70–0.89) in postmenopausal women. These results suggest that the dietary intake of β-carotene and β-cryptoxanthin may have a positive effect on bone health. View Full-Text
Keywords: β-carotene; β-cryptoxanthin; bone mineral density; postmenopausal female β-carotene; β-cryptoxanthin; bone mineral density; postmenopausal female
►▼ Show Figures 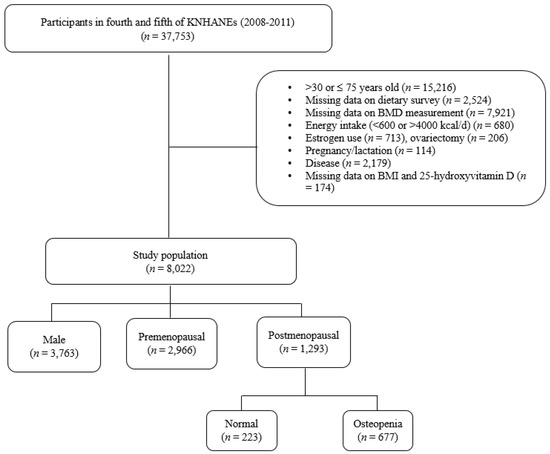