Zinc in Infection and Inflammation

Vitamin D (VD) is a fat-soluble steroid essential for life in higher animals. It is technically a pro-hormone present in few food types and produced endogenously in the skin by a photochemical reaction. In recent decades, several studies have suggested that VD contributes to diverse processes extending far beyond mineral homeostasis. The machinery for VD production and its receptor have been reported in multiple tissues, where they have a pivotal role in modulating the immune system. Similarly, vitamin D deficiency (VDD) has been in the spotlight as a major global public healthcare burden. VDD is highly prevalent throughout different regions of the world, including tropical and subtropical countries. Moreover, VDD may affect host immunity leading to an increased incidence and severity of several infectious diseases. In this review, we discuss new insights on VD physiology as well as the relationship between VD status and various infectious diseases such as tuberculosis, respiratory tract infections, human immunodeficiency virus, fungal infections and sepsis. Finally, we critically review the latest evidence on VD monitoring and supplementation in the setting of infectious diseases. View Full-Text
Keywords: vitamin D; vitamin D deficiency; infectious diseases; HIV/AIDS; tuberculosis; sepsis; fungal infections; oxidative stress vitamin D; vitamin D deficiency; infectious diseases; HIV/AIDS; tuberculosis; sepsis; fungal infections; oxidative stress
►▼ Show Figures 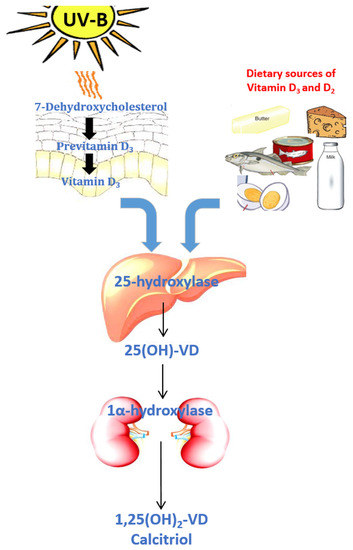