Evolution not Revolution: Nutrition and Obesity
Next Article in Special Issue

Food Sources of Energy and Nutrients in Infants, Toddlers, and Young Children from the Mexican National Health and Nutrition Survey 2012

Advising Consumption of Green Vegetables, Beef, and Full-Fat Dairy Products Has No Adverse Effects on the Lipid Profiles in Children

Little is known about cholesterol and lipid profiles in children, except from children known to have familiar dyslipidemia. However, concerns about the cholesterol levels are troubling parents when doctors advise to give full-fat dairy products to their children. Are these concerns realistic or not? At this moment, adult recommendations are also used for children.
There are circumstances when full-fat dairy products are investigated for their possible positive contribution to different health aspects in children. One aspect is the functioning of the immune system, which is partly dependent on the nutritional status. Nutrients, such as vitamins and minerals, play an important role in the strengthening of the immune system. As a consequence, an adequate nutritional status, and thereby a strong immune system, might prevent infections [1,2,3,4,5,6,7].
In a previous study, we compared the dietary intake of children with recurrent respiratory infection (without immunological disorders) and healthy children [8]. These children usually have respiratory complaints without an adequate explanation, like immunological deficiencies. The outcomes showed that the group of children with recurrent infections eats less beef, natural milk, and green vegetables compared to the healthy children.
Following this study, a nutrient-rich diet has been developed as a possible intervention for recurrent infections using the NEVO (Nederlands Voedingsstoffenbestand) tables, a Dutch nutrient database containing information about the nutrients of each food [9]. There are more international databases containing macro and micronutrients. We choose this database because this database contains the most information about the regular food that is eaten and sold in The Netherlands.
The diet is based on foods high in nutrients that could support the immune system, namely green vegetables, beef, whole milk, and butter (Table 1). This are also the food groups that are not frequently consumed by children with recurrent infections. Compared to other vegetables, green vegetables contain more zinc, vitamin A, and vitamin C. Beef contains more iron, zinc, vitamin A and vitamin E compared with other types of meat [9]. These nutrients have immune supporting effects and play a role in the antiviral mechanisms, which could positively affect recurrent upper respiratory tract infections [2,3,4,5,6,7]. Looking at the full-fat dairy products, whole milk, and butter are a source of lipids, vitamins, and essential fatty acids, such as linoleic acid and alpha-linolenic acid [9]. The lipids can act as a carrier for vitamins A, D, E, and K, [10] which can have a positive effect on the immune system [9,10]. In addition, the extra fats in whole milk have anti-microbial properties and can act as bacteriostatics [9,11].
This previous study showed that the dietary advice had significant positive effects on the length and gravity of respiratory tract infections in children [14]. Furthermore, another study showed that the same dietary advice decreases some symptoms of medically unresolved fatigue in children [1,15].
Strengthening the immune system just by changing food habits might be a solution for many patients with recurrent infections but without an immunological disorder or for patients with medically unresolved fatigue. However, there are thoughts that the saturated fats in the recommended whole milk and butter could have a negative influence on the lipid profile and/or the risk of cardiovascular disease. The National Heart Foundation of Australia states that the intake of saturated fatty acids is highly associated with an increased risk of coronary heart disease due to elevated LDL-cholesterol (low-density lipoproteins cholesterol) and serum cholesterol levels [16]. The American Heart Association (AHA) and American Academy of Pediatrics advise the use of dairy products that are fat-free or low in fat, in order to minimize the intake of saturated fat. They mention that a decline in saturated fat and cholesterol intake has been associated with a reduction in cardiovascular disease [17]. The Dutch Centre of Food recommends replacing saturated fats with unsaturated fats, which should lower the risk of cardiovascular disease [18].
Recently, conflicting findings have been reported regarding the association of saturated fats and the risk of cardiovascular disease. Several studies show no evidence for the assumed association and some even describe an inverse association [19,20,21].
The aim of our study was to determine whether the developed dietary advice—relatively high in saturated fats—has an influence on the BMI (body mass index) of children and on risk factors of cardiovascular disease. The total cholesterol/HDL (high-density lipoproteins) ratio is an important predictor of later risk of cardiovascular disease [22,23]. Additionally, the American Academy of Pediatrics recommends non-HDL concentration as an important benchmark for the screening of cardiovascular risk in children [24]. Therefore, we used the lipid profile of children in order to determine whether the dietary advice with its beneficial effect on at least respiratory tract infections in children can be safely used.

The present study is a non-randomized retrospective cohort study. The determination of the lipid profile of the children was executed by blinded laboratory workers. The measurements of weight and height were not blindly executed.
We performed a laboratory search in our laboratory database for patient blood samples. Included in the search were children aged from 1 to 16 years with at least two measurements of a lipid profile in the period between June 2011 and November 2013 at hospital ZGT (Hospital Group Twente) Hengelo/Almelo in the Netherlands. Patient charts were hand-searched for dietary habits/advice. If no details were given in the patient charts, dietary habits were addressed as unknown. When no abnormalities were noted, we assumed it was according to the Dutch dietary guidelines [12]. Children who had followed the dietary advice were assigned to the exposed group and the remaining children were assigned to the unexposed group. A schematic overview of the data collection is shown in Figure 1.
We excluded all children with a disorder that might influence the lipid profile, such as familiar hypercholesterolemia, hypothyroidism, diabetes mellitus type I and II, obesity, metabolic disorders, and medication which influences the lipid profile (according to [25]). As shown in Table 2, in the exposed group six patients were excluded based on the exclusion criteria described above, and one patient withdrew informed consent. Following the exclusion criteria, 26 patients were excluded in the unexposed group.
The children visited the pediatric outpatient clinic for several complaints. In the exposed group, most of them suffered from recurrent infections, subclinical hypothyroidism or tiredness. The unexposed group consisted of children with recurrent infections, abdominal complaints, epilepsy, failure to thrive, behavioral disorders.
The dietary advice, based on the NEVO tables [9], consists of eating beef three times a week, green vegetables five times a week (both age-related portions, according to the Dutch Center of Food), at least one glass (200 mL) of full-fat milk (3.4% fat) each day, and the use of five grams per slice of bread of natural butter (80% fat) for at least three months. Each item of the advice counted for 25% and children had to score at least 75% to meet the criteria of the exposed group. All other dietary habits remained unchanged. The children who did not follow the dietary advice were included in the unexposed group. For ethical reasons we were not allowed to approach them and had to assume that there were no large changes in their food habits during the period of follow-up.
We recorded information of all children from both groups: gender, age, weight, height, duration, and degree of following the dietary advice, lipid profile at the time of presentation, and follow-up.
The height of the children was measured with a vertical ruler. The children were weighed in underwear and all measurements were performed by a pediatrician. The children’s BMI was calculated by dividing their weight in kilograms by the square of their height in meters. The BMI z-score is calculated on the basis of gender, age, height, and weight [26]. The BMI z-score can be calculated only from the age of 24 months. This means that no BMI z-score was calculated in children younger than two years. These data were calculated, but not added in the tables, due to lacking data in the younger children.
Both for the start of the dietary advice, and at the end of the follow-up, the lipid profile was determined in all children. At the time of blood collection by venapuncture the children had an empty stomach, as nutrition can affect LDL and triglyceride concentrations [27]. The lipids from the lipid profile are total cholesterol, high-density lipoprotein cholesterol (HDL-C), cholesterol/HDL ratio, low-density lipoprotein cholesterol (LDL-C), triglycerides (TG), and non-HDL. The lipid profile was measured by enzymatic colorimetric techniques with the COBAS 6000 (Roche Diagnostics, Almere, The Netherlands). The LDL was calculated with Friedewald’s formula: LDL = total cholesterol − HDL − (0.45 × TG). The primary outcome of this study, the cholesterol/HDL ratio, was calculated by dividing the total cholesterol by HDL cholesterol [23]. The non-HDL can be calculated by the following formula: total cholesterol − HDL cholesterol = non-HDL cholesterol (non-HDL).
We used SPSS Statistics 20 (SPSS Inc., Chicago, IL, USA) to execute our data analysis. Normality was checked by visual expectation of histograms and Shapiro-Wilk test. Continuous variables were expressed as the mean with the standard deviation (SD) or the median with the interquartile range (IQR); categorical variables were expressed as counts with corresponding percentages. Differences in baseline characteristics between groups was tested using an independent t-test or Mann-Whitney (continuous variables) or Pearson’s chi-square (categorical). To test changes of the lipid profile between measurements within each group a paired T-test or Wilcoxon was used. Concerning the BMI and BMI z-score, several data were lacking. Therefore, the BMI and BMI z-scores were tested using mixed models analysis. For all comparisons, a p-value ≤ 0.05 was regarded as significant.

The baseline data of the unexposed and exposed group are presented in Table 3. The demographic characteristics, period of follow-up, the lipid profiles, and the BMI characteristics did not differ significantly at the start of this study.

This retrospective study shows diet quality in childhood can have some useful benefits. Earlier, it was shown that a dietary advice of green vegetables, beef, whole milk, and full-fat butter reduces the number of days with a respiratory tract infection in children. In this study we have shown that the dietary advice has no adverse effect on the lipid profile, BMI, and BMI z-score in children. Conversely, the dietary advice has a significant beneficial effect on the HDL-cholesterol, cholesterol/HDL ratio, and non-HDL-cholesterol. The dietary advice can, therefore, be safely recommended and might be beneficial for children with recurrent respiratory tract infections. However, the findings of this retrospective study should be further investigated in randomized controlled trials.

The authors would like to thank van der Palen (epidemiologist) and Josien Timmerman with their help with the statistical analysis.

Ellen van der Gaag was responsible for the study design, implementation of the study and writing. Romy Wieffer conducted the data interpretation, literature research, and writing. Judith van der Kraats collected and analyzed the data and performed the literature research. All authors designed the approach, commented, edited, and approved the paper, and are responsible for the final version of the paper. 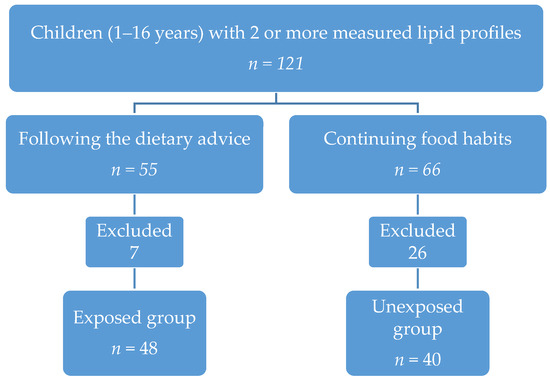