Effect of Probiotics on Metabolic Outcomes in Pregnant Women with Gestational Diabetes: A Systematic Review and Meta-Analysis of Randomized Controlled Trials
Next Article in Special Issue

Snacking Quality Is Associated with Secondary School Academic Achievement and the Intention to Enroll in Higher Education: A Cross-Sectional Study in Adolescents from Santiago, Chile

Immigrants in the U.S. may encounter challenges of acculturation, including dietary habits, as they adapt to new surroundings. We examined Vietnamese and Hispanic immigrant children’s American food consumption patterns in a convenience sample of 63 Vietnamese and Hispanic children in grades four to six who were attending an after school program. Children indicated the number of times they consumed each of 54 different American foods in the past week using a food frequency questionnaire. We ranked each food according to frequency of consumption, compared the intake of foods to the USDA Healthy Eating Pattern, and performed dietary pattern analysis. Since the data were not normally distributed we used two nonparametric tests to evaluate statistical significance: the Kruskal–Wallis tested for significant gender and ethnicity differences and the Wilcoxon signed-rank test evaluated the food consumption of children compared with the USDA recommended amounts. We found that among USDA categories, discretionary food was most commonly consumed, followed by fruit. The sample as a whole ate significantly less than the recommended amount of grains, protein foods, and dairy, but met the recommended amount of fruit. Boys ate significantly more grains, proteins, and fruits than did girls. Dietary pattern analysis showed a very high sweet snack consumption among all children, while boys ate more fast food and fruit than girls. Foods most commonly consumed were cereal, apples, oranges, and yogurt. Ethnicity differences in food selection were not significant. The high intake of discretionary/snack foods and fruit, with low intake of grains, vegetables, protein, and dairy in our sample suggests Vietnamese and Hispanic immigrant children may benefit from programs to improve diet quality. View Full-Text
Keywords: food preferences; food habits; diet/standards; gender factors; acculturation food preferences; food habits; diet/standards; gender factors; acculturation
►▼ Show Figures 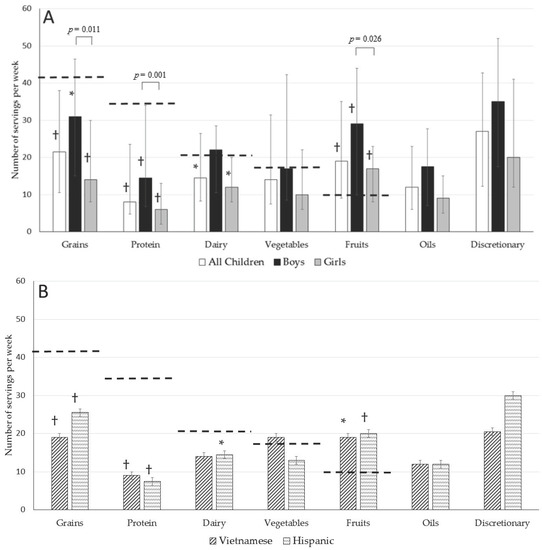